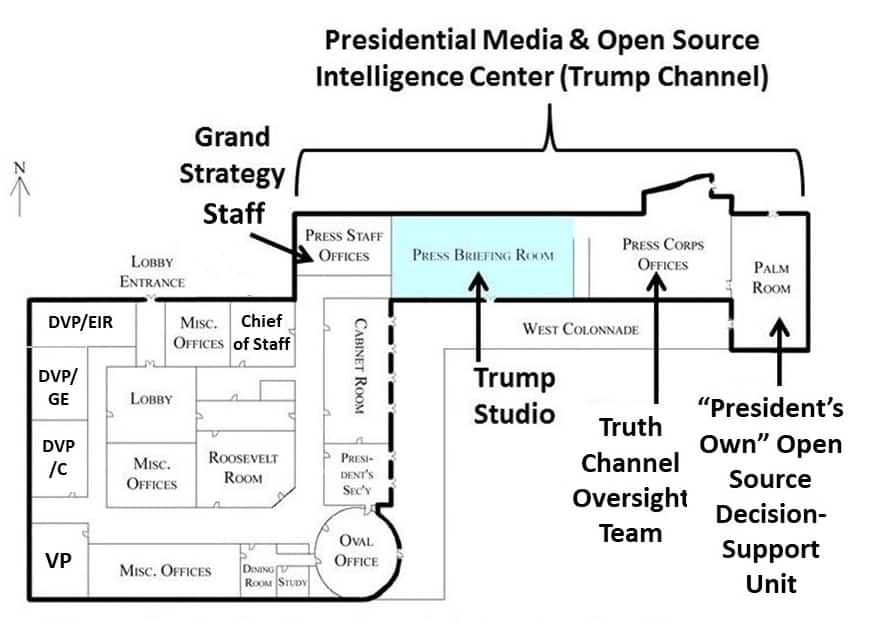 Donald Trump: “We Ought To Start Our Own Network And Put Our Own News Out There”

ROBERT STEELE:  I have known since Election Day that the President would never be treated fairly by the media, and I am the one who coined the term #GoogleGestapo after my own early experience with organized defamation and censorship. The President’s White House communications staffs and his campaign staffs have been tone deaf and ineffective.  Today the President is losing the national debate over impeachment — 47% now believe he should be impeached according to polls that are themselves suspect.

The greatest threat to the President as he reflects on my original idea first voiced formally in December 2017 is not the current media, but the crap that is likely to be created by Bil O’Reilly, Glenn Beck, and Steve Bannon, three losers desperate to get back into national prominence.  The President does  not need losers, he needs the following as illustrated by the graphic:

01 His own  Trump Studio in the White House that can also orchestrate seven minute educational interviews and information videos from across the country on all threats, all policies, all costs, all values, all concerns

03 An Open Source Agency and truth channel that creates a social media ecology completely independent of #GoogleGestapo such that the President can leave Twitter and send  Trumpets to 250 million citizens and residents who opt in, all citizens validated by Social Security Administration cross-check (the same cross-check being used to clear the voter rolls in time for Election Day) — this must be a TWO-WAY ecology that allows the President to poll the public and “see” the results on a single Presidential dashboard by issue, location, and demographic. The truth at any cost lowers all others costs.  The OSA is the President’s foundation for accessing the truth about anything, something the secret intelligence community and  Cabinet agencies are incapable of providing him. I have been planning such an ecology for two years now.

04 #UNRIG, Unity for Integrity Election Reform, enabling 100% of eligible voters to both run for office fairly, and have their vote count — this is how the President engages #WalkAway, Constitution, Green, Libertarian, and other parties as well as Independents and disaffected Republicans.  There is no substitute for #UNRIG, you either unrig the system or you do not, this is a yes or no choice.

If I Were President