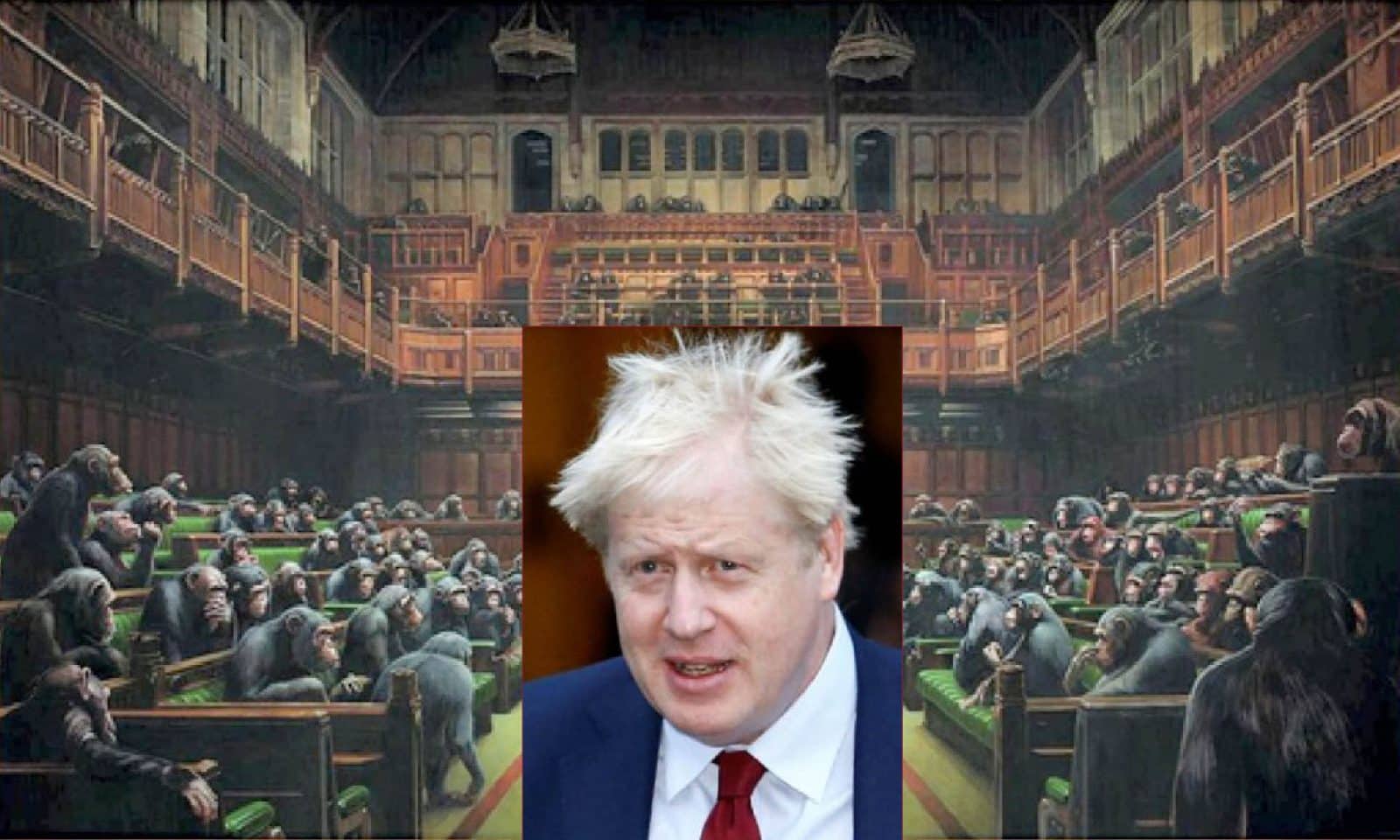 Amid the London “theatercracy”
the masterpiece of misterious artist
sold by Sotheby’s for 10 millions pounds:
the revenge for vanishing of Dover mural

It was painted in 2009 but amid the Brexit’s chaos its listing has skyrocketed. The masterpiece of the mysterious artist Bansky showing the British Parliament as a chimpanzee gathering was sold at Sotheby’s in London for £ 9,879,500. A figure that represents a new record for the faceless author’s awards.

If the artwork “Devolved Parliament” has acquired this immense financial value, it is due to the Prime Minister of the United Kingdom, Boris Johnson, who, like Theresa May who preceded it, is doing everything to make impossible the exit of Great Britain from the European Union, as requested by the Referendum of 23 June 2016.

The clashes without exclusion of blows in the assembly of English deputies made this painting with the unequivocal title “Devolved Parliament” a “prophetic creation” that in 15 minutes of auction has quintupled its value. The sale takes place a few days after the UK Supreme Court ruled last week that Johnson’s request to suspend – or “extend” – the legislative body until after the deadline was “illegal, null and void effect”.

Painted a decade ago by Bansky was dusted off earlier this year, ahead of the March 29 deadline for Britain’s exit from the EU. This deadline was subsequently extended to October 31, which now hangs over tensions between the Prime Minister – who wants a Brexit even without an agreement with the EU – and Parliament, which does not want it.

The artwork brings to mind the definition of “theatercracy” coined by the Athenian philosopher Platone. The term, used by the eighty-year-old wise man in his latest book Laws for an allegory between aesthetics and politics, literally means “the government of spectacle”.

«They inculcated in most people this license in music and the audacity to feel able to set themselves up as judges: and so the silent theaters became shouting, as if anyone had the ear to understand what is beautiful in music and what not it is, and instead of a competent aristocracy in this field a bad theatercracy was substituted» wrote Platone in chapter 70 of his last literary production. And the metamorphosis of a “competent aristocracy” is well suited to the clashes between Prime Minister BoJo and the House of Lords that has repeatedly rejected his “Brexit-No-deal”.

If I have never dealt with Brexit it is only because I believe that it is all a dramatization, skilfully designed to avoid fulfilling the will of British voters who voted only for a narrow majority to leave the European Union. It should recall that the referendum held on June 23, 2016 in the United Kingdom and Gibraltar split the population with 51.9% in favor of Brexit against 48.1% who voted for the stay.

Theresa May first and Boris Johnson even worse after they did everything to build exit options from the European Union without a minimum foundation acceptable from Brussels and, consequently, from the “doves” of the British Parliament in perpetual confrontation with the “hawks” who would like a Brexit at any cost.

To fully understand the situation, we need to remember some things about English history. In London in 1717 the Great Lodge of England was born, the most powerful masonic organization with a face discovered that, intertwined with that of France and the Supreme Council of the Ancient Scottish Rite Accepted of the Mother Lodge of Charleston (later transferred to Washington) wrote the foundations of the international geopolitics of the New World Order from the United States of America foundation to that of the European Union.

Great Britain wisely adhered to the EU keeping its Sterling pound tight, suspecting the congenital limits of a currency as fragile as the Euro, because it was built without real currencies in gold or tangible assets. Now that Brussels is increasingly twisted into a spiral of mechanisms in which the scepter of command is firmly in the hands of the ECB (European Central Bank) and some political commissioners (on these days in the midst of the storm because 4 are under investigation) London’s choice not to submit to the Euro has proved to be very happy.

THE BRITISH AFFAIRS IN AIRBUS AND THE EUROPEAN UNION

At the same time, however, Great Britain, without having the negative repercussions of an always emergencial Euro’s monetary policy, can influence the decisions of the European Union through its MEPs in the face of the “small” contribution of 9 billion euros per year. A trifle if you think of the recent scandal over illegal funding by Brussels to the airline Airbus that led to the decision of the WTO (World Trade Organization) to authorize the US to issue duties for 7.5 billion dollars on European products.

THE ILLEGAL FUNDING FOR AIRBUS

At this point it should be recalled that in 2001, after the consolidation of the European aeronautical industry (with headquarters in France and branches in Germany, Spain and England), the GIE consortium became the integrated Airbus company whose ownership is for 80 % of EADS, the leading European group in the sector, and for the remaining 20% ​​of British Ae, the second European group in the aviation field which later merged into BAE Systems became a leader in armaments and defense worldwide, third by turnover after the American corporations Lockheed Martin and Raytheon as demonstrated by the previous report by Gospa News on the Lobby of Arms. In September 2006, EADS acquired its 20% stake in Airbus from British Aerospace, with obvious gains for BAe.

This is only a small example of the mix of European and UK policies that would have lost much of its geopolitical influence in the Old Continent – and consequently also in the Nato sphere – with Brexit. All this is clearly evident in the strategists of the House of Lords of London who are sending prime ministers to the stage with risky proposals precisely to wear down the fans of the exit from the European Union and allow a second referendum in which to overturn the results of the first. Obviously this couldn’t happen, but the vain actions taken by Theresa May have become pure folly with the Boris Johnson’s attempted blockade of British Parliament can be well read in this light.

THE BANSKY’S REVENGE FOR THE BREXIT MURAL VANISHED

By a coincidence which seems fatal, Bansky’s work Devolved Parliament was painted in 2009: in the same year in which was founded the Supreme Court of the United Kingdom, which now rejected BoJo’s political coup attempt. The re-convened Parliament proceeded to block Johnson’s request for early elections, demanding that the Prime Minister undertake to exclude a Brexit first without agreements. Johnson has rejected and even eliminated some of the Tory parliamentary rebels who have sided with the Labor party in an attempt to block the Brexit, even though this has endangered its ruling majority.

The opposition show that refuses to vote the current PM seems to have invited comparisons with Banksy’s painting and increased its price to five times the most generous pre-auction estimates. It was awarded Thursday night for £ 9,879,500 at Sotheby’s in London, in less than 15 minutes of the offer. The sale broke the record for the work of Banksy, previously held by the sale of “Keep It Spotless” for 1.4 million pounds in 2008. The artist commented on the awarding on Instagram with a touch of nostalgia: “Too bad that I did not possess it yet ».

But the financial success of Bansky’s work also represents a small personal revenge for him. Last August, in fact, the disappearance of a mural dedicated by the artist to Brexit, which appeared in May 2017 on a building in the port of Dover, the English side connected directly to Calais, in France, and the then to Europe.

The work showed a worker intent on removing one of the 12 stars from the European Union banner and had been published by Bansky himself on his Instagram profile. The newspaper Sun, which launched a campaign in favor of Brexit, had projected the message “Dover & out” on the cliffs on March 24, the day when British premier Theresa May had triggered the beginning of Britain’s exit from the EU .

The causes of removal – or cover – remained a mystery. A resident of Dover, whose name would be David Joseph Wright, gave an interview to the US broadcaster CNN in which he stated that a four-story scaffolding was mounted Saturday, August 24th 2019 in front of the wall and that later, some days later, the mural was gone. From 2017 onwards several times the owners of the building had expressed a willingness to sell the work, but it is not clear whether this was removed or covered with paint.

Now, however, it is the monkeys that do justice to the disappeared work on Brexit and the clumsy maneuvers of a parliament delegitimized by a prime minister like Boris Johnson who showed the tact of a gorilla in a glassware…