[ Editor’s Note: Gosh, someone seems to be interfering in Iraq’s internal affairs. Who could possibly be interested in that? We already see the US up to its eyeballs in the Hong Kong demonstration, with protesters that are acting like semi-commandos when it comes to destroying infrastructure.

Just a few days ago it was announced that Iraq’s President Hadi was the intermediary in setting up talks between Iran and Saudi Arabia, which the Crown Prince bin Salman had initiated “to deescalate tensions”. Who would want to prevent that? It is a short list.

And then we had the additional timing of throwing sand in the logistic gears of Iran’s preparing for the usual 20 million pilgrim visitors to the shrines that brings a lot of money into the country. These riots could overwhelm the Iraqi security needed to protect the pilgrims on the roads.

I had an invitation to attend, but my October schedule was full. Would the usual suspects take advantage to create total chaos to put the Iraqi government on the defensive?

Both the Hong Kong and Iraq disturbances involve young people, with none of the political parties involved — almost a replay of past color revolutions in more stable countries, compared to what Iraq has been through.

What we are watching here is the finely crafted chaos tool of exploiting the young people with questionable futures to attack their governments, as they cannot reach those who are really responsible for their poor conditions, the perpetrators of fake wars upon them for their own corrupt and greedy reasons, as in Iraq’s case.

As for corruption in the Mideast, sure, it is everywhere, even in the Israeli Prime Minister’s office. But when we see protesters operating almost like professionally trained paramilitary, that is a big hint that outside forces are involved… Jim W. Dean ] 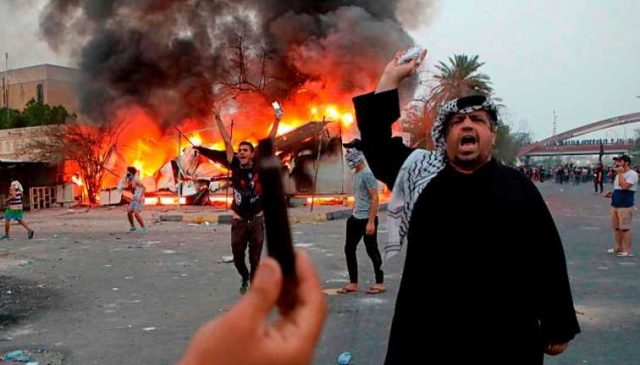 Ayatollah Mohammad Emami-Kashani, a member of the Assembly of Experts of the Islamic Republic of Iran, has put the blame for mass protests in Iraq on the US and Israel, the Tasnim News Agency reported Friday.

“The enemy is now determined against the Islamic nation, America and Zionism … are targeting the Arbaeen (pilgrimage) and Iraq, and causing trouble because it is hard for them to accept the presence of millions (of pilgrims) in Karbala,” Ayatollah Mohammad Emami-Kashani said in a sermon, according to Tasnim.

Mass rallies engulfed the streets of Baghdad and other Iraq’s regions on Tuesday as people protest against unemployment and poor services. According to the recent data, the number of people killed has reached 44, while nearly 1200 have been injured.

On Thursday, the authorities introduced a curfew in Baghdad. The measure was subsequently expanded to Najaf, Maysan, Dhi Qar, Babylon and Wasit provinces.

Moreover, the authorities blocked internet access across Baghdad and several other regions in central and southern Iraq.