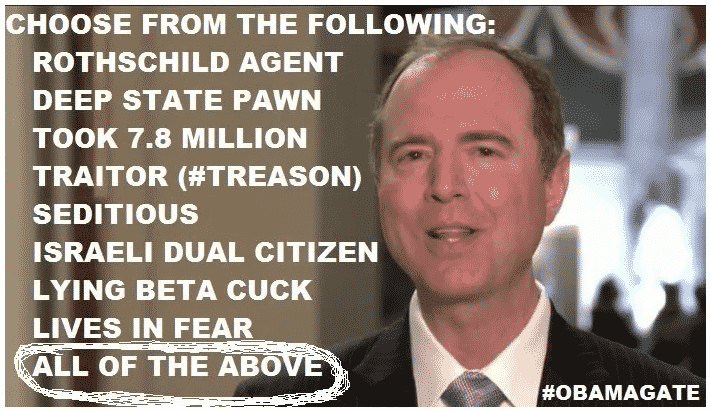 There is absolutely no question in my mind, based on years of non-fiction reading and direct observation, but that Dick Cheney, Donald Rumsfeld, Robert Mueller, Buzzy Krongard, George Tenet, John Brennan, Larry Silverstein, Maurice Greenberg, James Clapper, and Mike Hayden are all richly qualified to be indicted and tried and if convicted sent to jail for treason if not executed. From 9/11 to Whistlegate, the insider attack that murdered 3,000, the seven trillion dollar war for profit, and the soft coup against candidate and now President Donald Trump are without equal, although the CIA assassination of John F. Kennedy and the combination of the Tonkin Gulf false flag, Viet-Nam War, and USS Liberty come close.

Now add Adam Schiff to the list. Not only did he take massive amounts of money from a Russian-Zionist-Ukranian gangster, but he is severely compromised in relation to Los Angeles pedophilia and Satanic Ritual Abuse (SRA) operatiions based in Los Angeles. I believe the chances of Adam Schiff being on video doing bad  things to small children are no less than 70%.

I am undecided as to whether Gina Haspel knows she is being screwed by the boys in the back orifice. CIA sucks at counterintelligence even when it wants to get it right, NSA is controlled by Zionists at the software level, and also does not provide direct SIGINT support to either CIA or FBI counterintelligence endeavors (or clandestine operations overseas). Gina has potential for good, but she is not — as yet — demonstrating the loyalty and ruthlessness that the President and the Republic require of CIA if it is not to be abolished as the President is considering (along with the abolishment of the FBI). On balance Gina gets the benefit of the doubt for now.  John Brennan should be locked up and under intensive interrogation starting with the Gold War against Russia, then the CIA’s complicity in 9/11, and finally the CIA-FBI, DOJ, White House conspiracy to deny President Donald Trump the election, and now to carry out a regime change against the President.

Note: I leave WH, DOJ, and FBI  treason under Obama to others.  CIA is my true home. It is the integrity of CIA that I care about.

I await with bated breath the October massacre that William Barr must surely have ready to go. I recommend that Mike Pence be deeply investigated as well, I think he is double-dealing and betraying the President, as is Nikki Haley — both are in my view fully-funded fully controlled double-agents of the Zionists.

“I Love The Smell Of Malfeasance In The Morning”

WhistleGate may be Mr. Brennan’s last desperate ploy to ward off prosecution, a gate too far.

Dr. Pieczenik states that Adam Schiff is compromised by Ukrainian criminal funding to his campaign, and by close ties to a major Los Angeles practitioner of Satanic rituals and pedophilia.

Jon Rappoport: DHS Takes Over US Elections – This is a Coup [PBI: It Also Gives Zionists Who “Own” DHS a Chance to Control 2018 Elections]

Update 1: Q Anon – We Have Schiff on Tape Committing Treason

Q said that there is a recording between Valerie Jarrett and Adam Schiff so if Q team is correct which they have been so far, we Have Schiff on Treason along with 22 others… including Hussein. DJT would not tweet about treason unless there was hard evidence.

When Schiff ran against incumbent Republican Jim Rogan in 2000, his campaign was given more than $100,000 by the Soros-funded site. Schiff was also given the Toll Fellowship, which is sponsored by Council of State Governments, a non-profit that is also heavily funded by Soros’s  Open Society Foundations.

Phi Beta Iota: We believe Schiff to be “owned” by the Zionists and their Mossad-managed pedophilia entrapment network, with Soros as a supporting sponsor, not the main deal.  Schiff is owned.  Schiff is most certainly someone who should be investigated and indicted for treason.