[ Editor’s Note: Once again another big surprise, and this one from the Voice of America no less. Color me surprised. May these good ones keep on coming, and this truce talk turn into a reality.

The VoA, while still trying to keep their jobs, trotted out the lame, “Tehran has continued to deny any role in the [Aramco]attacks”, vs. “no one has put any proof on the table that Iran launched the attack”, as was being claimed for the first several days.

As VT had expected when Trump backed off his “locked and loaded” silliness — walking that back into “We are waiting until the Saudis have finished their investigation and decided what they want to do, as they are going to have to pay for it” — that the US was not going to trigger a major shooting war in the Gulf, as there was much to lose and little to gain.

The new US posture must have shocked the Saudis to the bone. The Yemeni war was their gross miscalculation. The US military told them it was a no-win situation, but glory-bound bin Salman wanted to portray himself as the great Arab war leader.

The US is now talking to the Houthis. Proof of that is their recent statements, and bin Salman himself saying he wants to deescalate tensions with Iran. Israel is crying, and the Saudis and their Gulf partners do not want to look like they are engaging in talks out of weakness, but of course they are.

The idiots thought they would crushed the Houthis with their push-button war toys and rag-tag mercenaries, but found that their fake militaries were just that. Even VoA says they have no ground capability, which has been obvious to all that wanted to see.

What the VoA does not say is that bin Salman chose to go the crimes-against-humanity route by targeting the civilian infrastructure and starving people to death. There should be a price to that, as it is a major crime under the Geneva convention.

Also left out of the Voice of America article is that now everybody knows that no one in the region can attack Iran on the ground. If the poor Houthis can wipe the floor with the Gulf States troops, just think what Iran could do… Jim W. Dean ] 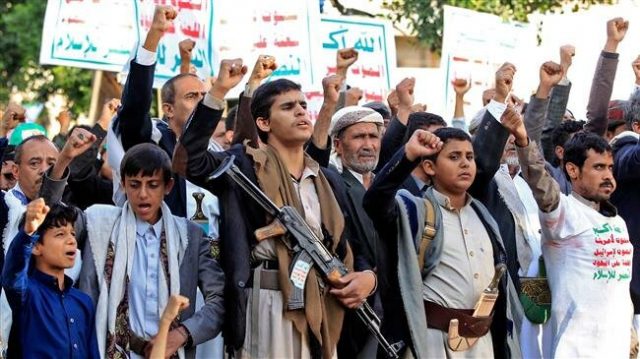 Saudi Arabia says it views the truce announced by Yemen’s Houthis positively, claiming the proposal is something the kingdom has always been seeking.

“The truce announced in Yemen is perceived positively by the Kingdom, as this is what it has always sought, and hopes it will be implemented effectively,” Saudi Arabia’s Deputy Defense Minister Prince Khalid bin Salman wrote on Twitter.

Last month, the Houthi movement offered to halt its retaliatory attacks against Saudi Arabia if the kingdom ends its bombing campaign against Yemen.

The offer and the kingdom’s belated welcome follow a recent major ground operation by Yemenis and a brazen drone attack on Saudi Arabia’s heart of oil industry.

US government-funded Voice of America (VOA) said on Friday Saudi Arabia is shell-shocked from the devastating attack on Aramco oil facilities last month.

In an analysis, the agency said the kingdom has realized that it is facing defeat in Yemen and is consequently seeking to terminate the war.

After four years of facing Saudi Arabia and the United Arab Emirates, the “once rag-tag” Houthis and their Yemeni allies have managed to hold off “the military might of Yemen’s rich Persian Gulf neighbors,” VOA said.

Launching its war on Yemen in March 2015, Riyadh had sought to install a pro-Saudi regime in power and crush the popular Ansarallah movement.

The article explained, however, that Ansarallah, which has proven to be one “of the most effective” fighting groups in the region, has forced Riyadh to realize the failure of its military campaign.

“From the Saudi point of view there is a recognition that after four-and-a-half years, they can’t bomb the Houthi into submission, and that perhaps there has to be some kind of accommodation,” said Persian Gulf analyst Neil Partrick speaking to the VOA.

Consequently, recent developments have not only faded the chance of victory in the eyes of Riyadh, but, according to observers, the kingdom is increasingly seeing the war in Yemen as a threat “greater than before,” VOA said.

The September 14 Aramco attack plunged Saudis into “shock”, said Partrick who was present in the Aramco oil facilities in the “immediate aftermath” of the operation. He said Saudi media pleaded for the West’s “strong action”, even military intervention, but Riyadh’s Western allies refrained from any direct action.

The US administration, instead, is trying to coax Saudi Arabia into negotiations with Houthi leaders, The Wall Street Journal reported.

US Assistant Secretary of State for Near Eastern Affairs David Schenker, who visited the region recently, said Washington is in talks with Houthis in a bid to end the war, the first such contact in more than four years.

According to a military spokesman, Yemeni forces killed some 200 Saudi-backed mercenaries and took hundreds of others captive in the offensive. The UAE’s withdrawal of troops from Yemen has also compounded Saudi Arabia’s woes.

An unnamed diplomat, quoted by Reuters, said the war would effectively end if Riyadh agreed to a halt in airstrikes as the Saudis lack “extensive ground capabilities”. The news agency cited what it called unnamed sources as saying that Saudi airstrikes in Yemen have “decreased significantly” recently.

A senior Houthi-affiliated military source told Reuters Riyadh had also “opened communication” with the head of the Yemen’s Supreme Political Council, Mahdi al-Mashat, via a third party. No deal had been reached, however, the source added.

The Houthi movement has warned that it will proceed with “more crippling” attacks against Saudi Arabia if Riyadh fails to address its peace offer.