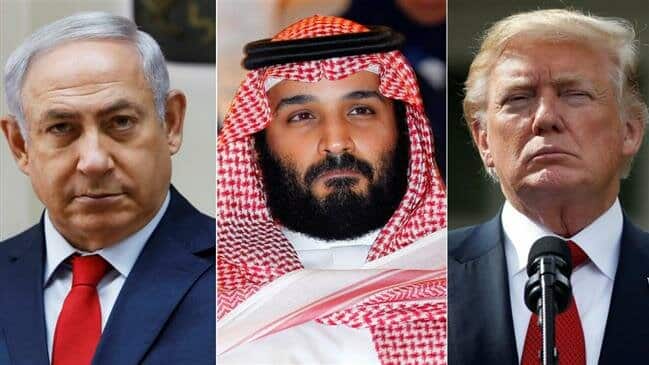 [ Editor’s Note: Color me surprised to see Haaretz following VT on Mohammed bin Salman’s political change of fortune, and reading about it in PressTV to boot. I figured we were banned in Israel.

Below you will read about the shifting sands in the Mideast, from approaching the brink of war after the Aramco attack to not much at all. There are no more false-flag limpet mines being placed on tankers to blame Iran, and the “Iran did it” chorus on the Aramco attack sputtered and crashed after a week or so. Requests for proof always went unanswered.

Oil prices are now lower than they were before the Aramco attack, and the market is flat due to lack of demand, part of that due to China topping off its reserve storage capacity and reducing orders.

The Saudis are reporting they are back to full oil production; but I expect they are buying some from neighbors and using its reserves to fulfill its delivery orders. No cameras have been allowed in to see the miracle repairs done before there was time to build all the custom parts needed.

Over in Trump world, The Donald is greatly distressed and spending all his time attacking Democrats and Jewish voters who support them. Bibi is twisting in the wind, as no one wants to play second fiddle to him in a rotating Prime Minister slot. And bin Salman is still reeling from military defeats.

All Iranians have been doing is explaining that, if anyone in the Mideast should attack them, their world would change forever, and I don’t mean Iran’s. Let’s hope Saudi Arabia has figured out it has been played by all those selling it weapons, knowing it was a paper tiger… Jim W. Dean ]

An anti-Iran alliance forged between the leaders of the United States, Israel and Saudi Arabia is faltering, as each have become overwhelmed by their own dilemmas, Israel’s leading daily Haaretz reports.

“The three leaders who have led the anti-Iran line in recent years were each absorbed in his own domestic crisis this week,” Haaretz wrote on Thursday.

The Israeli paper pointed to the recently intensified impeachment inquiry surrounding US President Donald Trump and pre-indictment hearings threatening the tenure of Israeli Prime Minister Benjamin Netanyahu during the past week as signs that the two leaders were mired in crisis.

Numbering other setbacks for Riyadh in the past week, Haartez highlighted a major Yemeni operation in the country’s northern region of Najran against Saudi-led troops.

The operation led to the death of about 200 Saudi-led forces and the capture of another 2,000 troops.

The article went on to describe Iran’s latest international developments in comparison, claiming that the country had experienced a “relaxed week” despite “pressure of the US sanctions and the country’s economic distress.”

It wrote that “Iranian President Hassan Rohani received an enthusiastic welcome at the United Nations General Assembly in New York” last week, adding that Trump has been “wooing” the Iranian president in order to get a chance to meet with him.

The daily added that the developments marked a stark contrast with the Trump administration’s initial rhetoric against Iran, when Washington withdrew from the 2015 Iran nuclear deal last year and announced a campaign of “maximum pressure” campaign against Tehran.

Also pointing to Riyadh’s change in tone towards Iran, the article highlighted that the Saudi crown prince had urged for a “peaceful” solution regarding its tensions with Iran in an interview earlier this week.

The crown prince had stated that a war with Iran would lead to the “total collapse of the global economy.”

PressTV-MbS: Iran war will cause ‘collapse of global economy’

Saudi Arabia’s Crown Prince Mohammad bin Salman (MbS) has warned that war with Iran will entail a “total collapse of the global economy”.

Haaretz said such developments came despite the fact that Washington and Riyadh had both blamed Iran for being behind a major September 14 Yemeni drone attack on Saudi Arabia’s oil installations, an accusation firmly denied by Tehran.

“Not only did the sophisticated and destructive attack on the Saudi oil facilities last month pass without a military response from Riyadh or Washington, but Saudi Arabia even made it clear that it supported dialogue with Tehran,” it wrote.