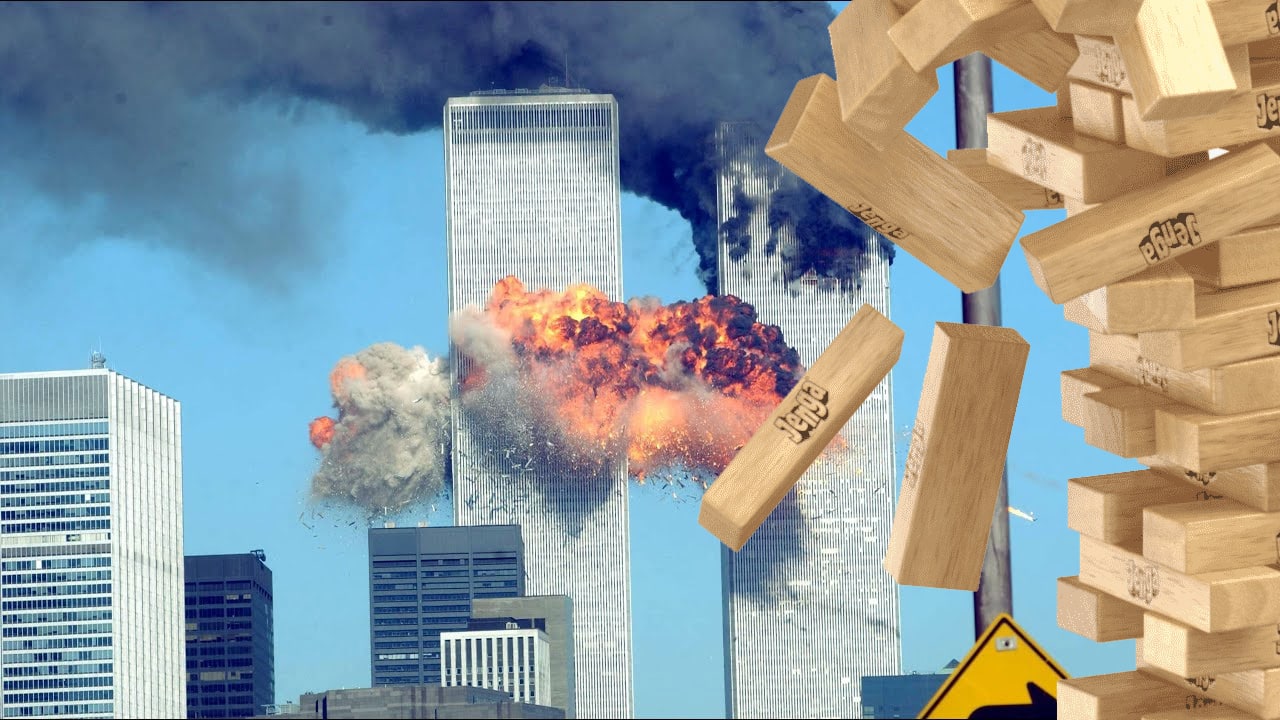 By Joseph A. Olson

Jenga is a stacked wooden block game for arrested development drunks, where three block rows are stacked in alternate layers and drunks take turns pulling out a block until the loser pulls the critical element causing the stack failure.  As such, this is a perfect analogy for the National Institute of Standards and Technology to play their World Trade Center Jenga game on citizens.

As a trained structural engineer, I have studied the WTC failures from the day it happened.  This crime is so extensive that a single research article can have only a minimal impact.  This article will just add a few mosaic pieces to other referenced research, but first, the reader is advised to refresh your memory on proven false flag events during the war.

Review the April 1964, Gulf of Tonkin and the June 1967 USSLibertyMovie(.)com event.  Then review “All Wars Are Bankers Wars” by Michael Rivero at WhatReallyHappened(.)com on the staging of perpetual war.

Indeterminate Structural Analysis may seem like an odd name for an engineering course in a discipline that prides itself on accurate answers, but as the professor explained, “exact calculations of loads in multi-frame structures were empirical until the adoption of the Hardy-Cross method of moment distribution in 1932”.  This method involved a tedious, simultaneous equation calculation at every horizontal beam and vertical column connection.

Three-dimensional calculations for multistory structures was impossible for decades.  The horizontal wind, and later seismic loads were distributed, along with the vertical dead weight loads to size structures.  To simplify design, the Twin Towers were given a square footprint, equalizing the load on all sides, and were designed in ten-floor segments, stacked eleven high to give 110 story tall skyscrapers.  The high cost of failure caused engineers to adopt a 3:1 safety factor for total load design.

With the advent of IBM 360 computer, the complex distribution calculations could be accurately completed in a reasonable time and showed that the simplified method caused up to double this safety factor.  The Twin Towers used the simplified method and were at least six times over the actual load requirement.

The government quickly advanced the “raging fire and pancake collapse” hypothesis and rushed off to preplanned foreign wars.  Meanwhile, as emotions calmed, Truth Seekers began to question the anomalies of common sense and the Laws of Physics.  We will refer to the extensive evidence and add some detail to clarify government deception.

In March 2015, I did a two-hour interview with Veterans Today editor, Dr. James Fetzer, titled “Unequivocal 9/11 Nukes” based on fourteen years of my research and a dozen VT articles on Nuclear Education.  In July 2018, I was contacted by Robert David Steele to write an 800-word memo to Presided Trump,

Principia-Australia(.)org and at VeteransToday(.)com and was soon contacted by a reader advising that I review analysis by Heinz Pommer at 911History(.)de

This material was so thorough and so shocking that I immediately forwarded to VT, who then posted “Breathtaking: Solving Nuclear 9/11”

The Pommer analysis includes dozens of powerpoint graphics, photos, and three video presentations.  His analysis was completely independent of the VT material, yet reinforced their nuke hypothesis with very little overlap.  This article is the definitive analysis of the WTC events.  With the Truth explained, the myths are exposed.

There was no initial explanation for multiple high rise collapse beyond cavemen with box cutters, which did not satisfy the victim’s families or the curious science students.  In April 2002, the FEMA fable was released.

A key component was to be National Fire Protection Association testing on fire caused deflection of steel bar joists.  The NFPA officer on this test disclosed publically that this hypothesis was impossible, causing his firing and the need for another “authority” myth to be created, enter the NIST cleanup squad with fresh word salad obfuscation.  This fabrication began on Sept 2002 and was released on Oct 2005.  Debunking 400 pages of nonsense are beyond the scope of this analysis but could be entertaining for a congressional hearing.

Since the Twin Towers were identical and had nearly identical damage and failure modes, they could be treated with a single JENGA TRICK.  Here, the “inward bowing of the relatively light steel exterior columns caused the structure below to collapse, offering minimum resistance to the load above”, this based on the kinetic energy of the falling mass from above.  There is one huge problem, the equation for this force is

(Mass) x (Velocity)2 and a body at rest has zero velocity, so the only force would be the mass, already supported by over six times the available load.  NIST then disclaims the previous “pancake hypothesis” and asserts that “there was NO evidence of blasts or explosions.  Go to > FAQS-NIST-WTC-Towers at NIST(.)gov for additional fiction.  Since WTC-7 was 47 stories tall, X-braced, conventional steel-framed construction, and was not impacted by an aircraft, cavemen or box cutters, it required another JENGA TRICK.

For this, they concocted a “long span, fire-induced, beam expansion causing progressive collapse” hypothesis.  The linear coefficient of expansion for steel is

7.2 x 10-6  and for the NIST claimed 6” expansion to unseat one, 30 ft long beam from its column haunch would require over 10.000oF.  Placing a 300-pound mini-nuke in the basement solves all the controlled demolition issues.

One objection to the 9/11 Nuke Theory is the low rate of radiation, which is still far beyond background levels and contains nuclides only produced by atomic bombs.  In his presentation, Pommer casually mentions that the element Iron has four stable isotopes.  What he did not mention was Iron has 24 radioactive isotopes.  Cement is primarily Calcium Carbonate and sand for concrete or melted to form glass is Silicon Dioxide.  Thus, the WTC building has the following gamma particle absorbing tamper materials.

Review the half-life of all these potential elements and you can see the heat source that kept Ground Zero at fission heated 2500oF until Dec 2001.

In Sep 2017, Dr. Leroy Halsey, a structural professor at the University of Alaska, Fairbanks produced his initial analysis of the NIST hypothesis on WTC-7 and promised further research.  In Sep 2019 the UAF team released the complete, finite member analysis proving that NIST Jenga scheme was impossible, but not making any projection on what was possible.

One subject that needs amplification from my “Unequivocal” article is the preplanned airliner impact sites and the “thin steel beam” hoax by NIST.  The Twin Tower exterior Vierendeel Trusses are described in FEMA_403ch2 and the exhibits below.  At each floor there was a 52” high, 2” thick steel spandrel plate, welded to the vertical columns at 40” on center and to the top and bottom chords of the floor joists, per Figure 2-8.

There was a continuous floor angle welded to support the metal decking and ¾” thick hairpin shear ties at each joist, welded to the spandrel.  The entire floor was then covered in 4” of concrete, forming a dynamic membrane linking all floors, all walls, and all columns.  To claim an airliner could create the holes visible in Figure 2-6, is impossible.

The only explanation for the Road Runner openings is for ALL of the spandrel joiner bolts, all column end bolts and every floor joist connection was precut and shaped charges used to project the wall panels out just prior to impact.  This was Hollywood’s special effects with no Academy Award. 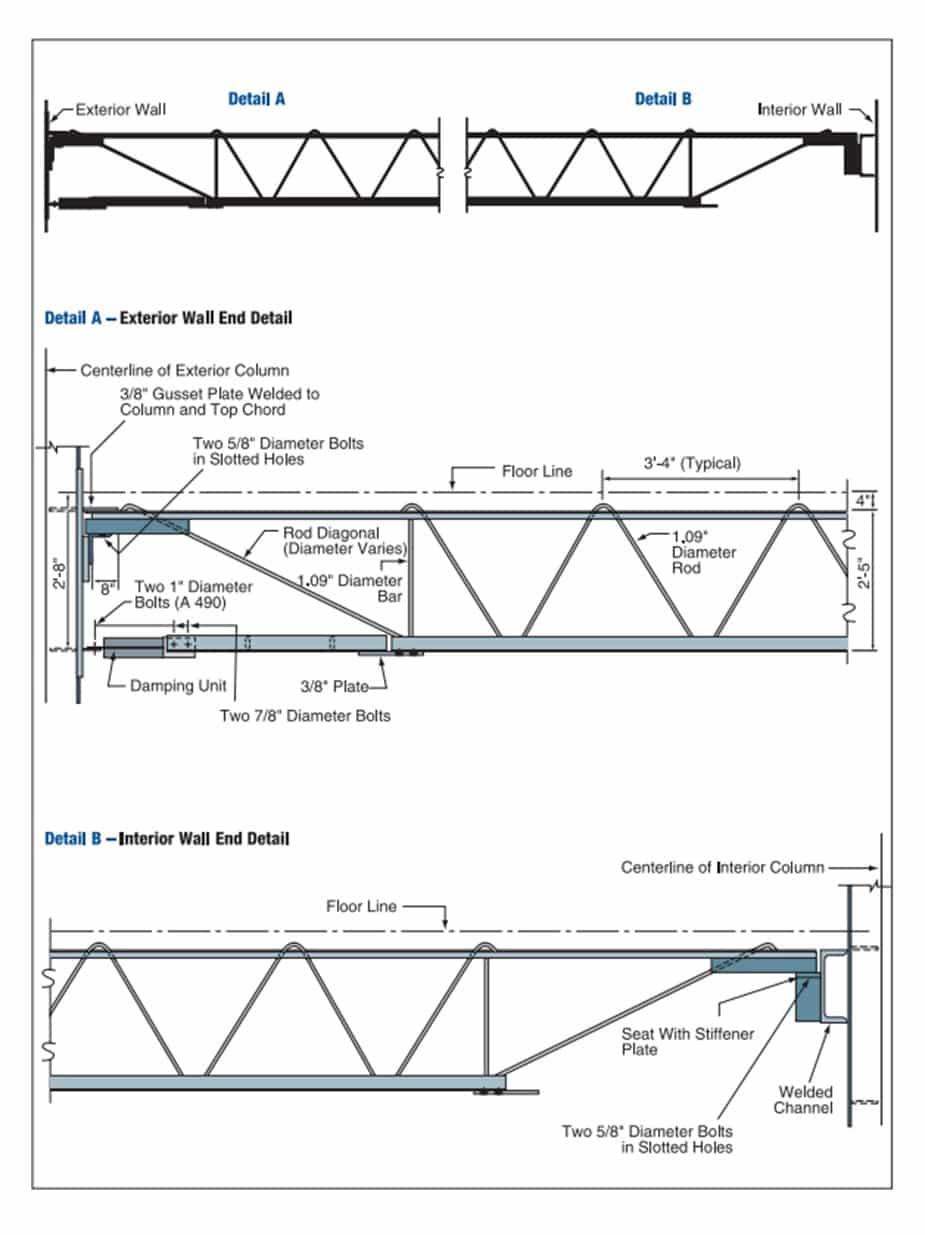 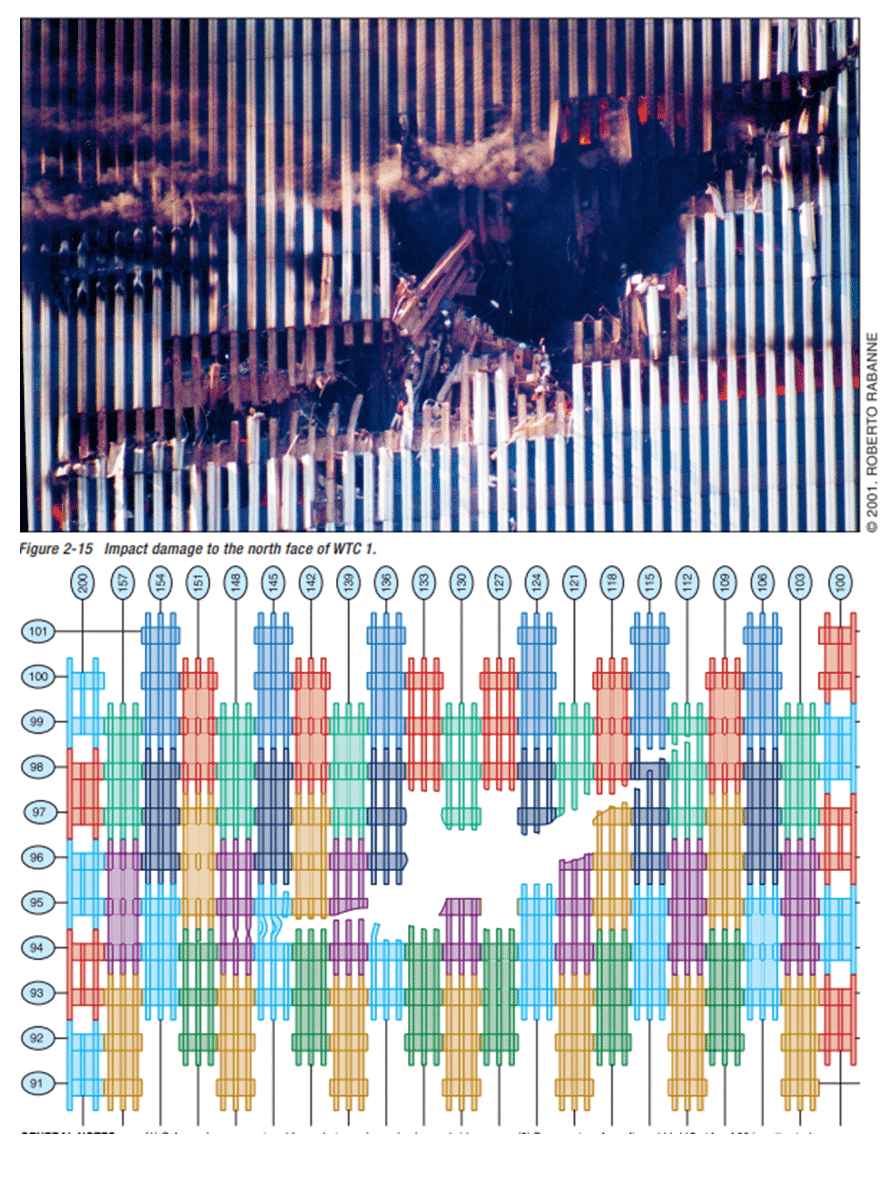 We will complete this analysis with a review of the two false flags mentioned in the opening of this article.  The LBJ staged Gulf of Tonkin lead to the death of 60,000 US servicemen and a million Southeast Asians.  The LBJ planned the USS Liberty attack was to have sparked World War Three.

Nuclear bombers were minutes away from nuking Cairo when the sailors managed to get a 100 ft wire antenna signal out over a non-secure frequency.  Certain that our NATO allies, the Egyptians and the Russians would know that the total loss of the Liberty was by a US ally, the nuke bombing raid was called off.  Having visited Pyramids at Giza, it is horrifying to think that the only remaining of the Seven Wonders of the World was nearly turned to glass by a warmonger, psychopath president.  We currently have a thin grip on the future of civilization, and humanity’s future depends on ending our current elitist control system.

Joseph Olson is an independent writer and public speaker.