[ Editor’s Note: A nickel short and a day late is what this story brings to mind. The two-timing Kurds were happy to be on America’s teat when the river of funding was flowing that Trump threw out there today, something he is not supposed to do.

The Kurds put out a peace feeler a couple of months ago to Damascus – probably a ploy to get something it wanted from the Americans. I would not trust these people as far as I could throw them.

Even if the SAA wanted to help them, how would it get there, and what fronts would be laid open if Syrian troops and equipment were stripped to send north? Would Damascus strip the Idlib and Aleppo fronts? I don’t think so.

If the YPG Kurds have moved out, visibly so, then Turkey might not be coming in. Sure, Erdogan said today it would only be a temporary incursion to pacify the area, but forgive me if I don’t believe anything he says.

He claims he only wants to repopulate that area with Syrian refugees. But who gave him permission to decide where Syrians are going to live inside their own country? I can’t see any “honoring Syrian sovereignty” in that.

Color me suspicious, but I thing the YPG Kurds will be sleeping on the ground for a while, just in time for winter coming on. They can enjoy it as payback for what they put the Syrian Arabs through, pushing them off their lands which is not a good neighborly thing to do… Jim W. Dean ] 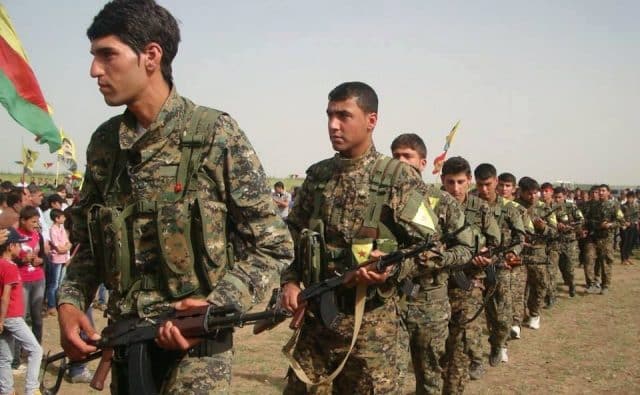 GENOA (Sputnik) – Kurds in northeast Syria are ready to work on an agreement with Damascus in order to protect themselves as the Turkish operation in the area is looming and the United States has abandoned its support, a top official of the de-facto autonomous administration of North and East Syria (AANES) stated.

“In order for the AANES to continue to safeguard the people’s rights and play a role in all Syria, an agreement with Damascus is necessary. This is why we have repeatedly tried, either directly or through Russia, to hold dialogue with Damascus and reach a political agreement to end the Syrian crisis and confront the agendas seeking the division of the Syrian territory”, Badran Jiakurd, an adviser to the Autonomous Administration of North and East Syria, said.

He continued on by saying that they “have always recognised and believed in the importance of holding a serious dialogue with Damascus and we will always be open to achieve this end. Russia could play a role in this respect, and we believe that this would be of crucial importance”.

“We will do whatever it takes to protect our region from any attack and defend our people. We hope that Russia could play a role in resuming the dialogue to resolve the Syrian crisis, and we are ready to resume dialogue with Damascus for this purpose”, Jiakurd said.

Kurds in the de facto autonomous region have already tried to reach an agreement with the Syrian authorities in order to ensure their protection from Turkey, but those talks have not achieved any tangible results.

Meanwhile, the United States, who used to support Kurdish forces in northern Syria, has started to withdraw troops from the area. The White House stated it would not “support or be involved in” Turkey’s operation.

At the same time, Russian President Vladimir Putin and Erdogan had not discussed Ankara’s plans to launch a military operation in Syria, Kremlin spokesman Dmitry Peskov said earlier on Monday.

He also stressed that Russia respected Turkey’s right to ensure its security, but that steps that could put at risk the effort toward settling the Syrian crisis must be avoided. The Kremlin hopes that Turkey will respect Syria’s territorial and political integrity, Peskov said.

Turkish President Recep Tayyip Erdogan announced on 5 October that Ankara could launch a military operation in neighbouring Syria, east of the Euphrates River, in coming days, in order to clear the border area of Kurdish militants — whom Turkey considers terrorists — create a security zone, and accommodate Syrian refugees.