Dear people, who “believe in man made climate change”,

before I explain more about that, first let me give you some short answers:

But the reason is climate control or as it is named now Climate Geoengineering or Large Scale Climate Engineering.

This is the essence of Globalization and a Global Government structure, as the governance of the whole atmosphere, short-term weather and long-term climate can only be conducted by a global central power.

I will give You a chronology and levels of acceleration of climate control.

2. During WWI experiments were conducted to influence the intensity of rain as a measure to deteriorate the movement of enemy troops. Also artificial mist was used to obscure the view of the enemy. Between the world wars the methods of induced precipitation were developed and tested with devastating results.

The History of Cloud Seeding: From Pluviculture to Hurricane Hacking
https://climateviewer.com/2014/03/25/history-cloud-seeding-pluviculture-hurricane-hacking/

3. During WWII with the development of aviation the weather warfare become more sophisticated and applied as a regular measure of warfare.

4. After the WWII during the 1950s the research was intensified and extended. The whole concept got the naming Geophysical Warfare, as the application did not remain within the Troposphere but also the Stratosphere and Ionosphere were used. According sites like HAARP in Alaska and teh El-Nino-Machine in Jicamarca, Peru were build.

5. In 1960 the order was given to the CIA to conduct the project for Geophysical Warfare as the global airspace needed to be brought under control. Geophysical Warfare has to be long-term and large-scale. Most important paper serving like a screenplay is the “Memorandum on Climate Control”. Already there the commercial use for desert farming was projected.

You can read the full transcript with explanations here: 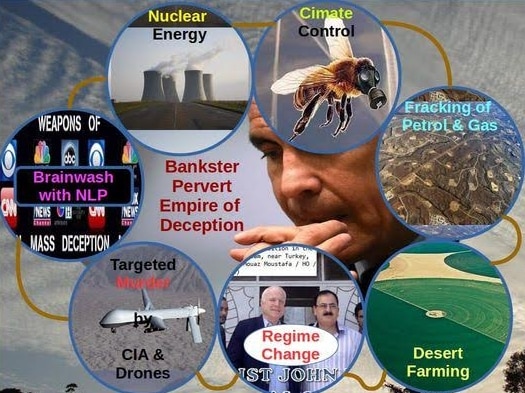 6. In 1965, after the killing of JFK, LBJ ordered a modified version of this “for the public”, covered as “Restoring the Quality of Our Environment“. Here You can find some quotes from there:

How the Geoengineering Scam began in 1965! LBJ JFK
http://geoarchitektur.blogspot.com/2016/08/how-geoengineering-scam-began.html 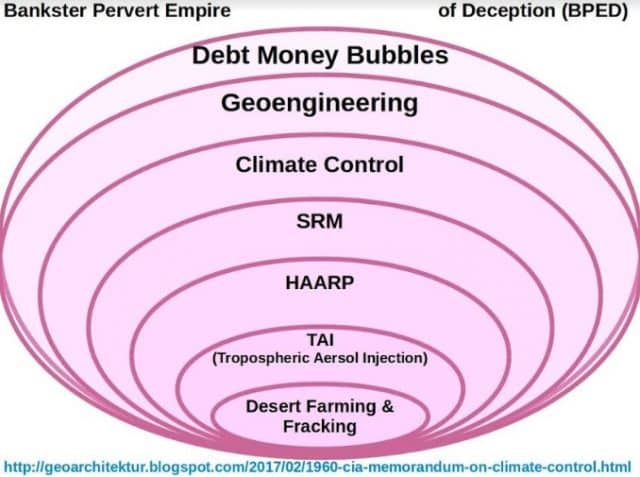 7. Since the end of the 1960s and beginning of 1970s the water management by Climate Geoengineering became more urgent and profitable as a measure of water supply for the fast growing Nuclear Fracking industry in the USA.

Consider that offshore or onshore fracking always means nuclear bombing of the underground!

8. During the 1980s this system was extended in some degree to the vassals states of the USA based empire.

9. 1990 after the breakdown of Warsaw Pact and Soviet Union, the globalization of water management by Climate Geoengineering and fracking began. More sites and mobile installations were build all over the world. One key moment is the regime change and breakdown of the statehood of Somalia in 1991. Somalia is the longest part of the coastal thermal bridge, which is used to move water to Saudi Arabia from the Indian Ocean.

10. After 2001 European airspace was fully integrated into the water management scheme to Saudi Arabia. The Saudis established a huge industrial desert farming and food processing industry with the growing water supply.

Europe is poor & Arabia is rich on water!
http://geoarchitektur.blogspot.com/p/the-water-poor-will-be-named-water-rich.html

11. In 2004 the whole Indian Ocean area was devastated by a catastrophic earthquake and tsunami at the western coast of northern Sumatra, Indonesia by Nuclear Fracking explosions. The humanity is still not aware of that and thinks it was a natural earthquake.

12. In 2010 Russia was attacked by measures of Geophysical Warfare. Forests and underground carbon reservoirs were ignited by Directed Energy Weapons.

13. Also in 2010, Haiti was shaken by underground explosions by Nuclear Fracturing for oil and gas exploration, followed by tsunami devastation. It is not a coincidence, that huge oil reserves were “discovered” after that. The humanity was distracted by the prostitute media by focusing on the fake help for the people of Haiti. About 2 billion Dollars were collected and siphoned to the Clinton Foundation.

14. Also in 2010, Pakistan was attacked by floods from flash rain by Geophysical Warfare. 2/3rd of the country was under water.

15. In 2011, Libya was attacked to conquer its huge frackable oil and gas reserves and to punish Gaddafi for using the delivered water without giving oil and gas concessions to the US corporations.

15. The oil and gas production could be increased on the Arabian Peninsula. To reduce the costs of transport to the consumer markets in Europe, a new pipeline from Arabia to the coast of Mediterranean Sea and the pipeline network of Turkey was required. Syria rejected the bid by the Arab petrol-dictators and USA and accepted the alternative route from Iran and Iraq. Therefore was attacked was attacked in 2011 by mercenary armies, framed as and integrated into the Jihadist groups.

16. In 2015 Yemen was attacked, because of fear of loss of control onto the airspace of this country. The regime change did not work as desired. The pro-Iranian groups got more power. Water is moved from the Indian Ocean, across the airspace of Yemen and Oman to Saudi Arabia.

17. In 2016 New Zealand was shaken and devastated by an earthquake. It is not a coincidence that fracking exploration is conducted at this area.

18. In 2018, Palu at the north of Sulawesi in Indonesia was shaken by a huge explosion, followed by a devastating tsunami.

This should be enough for now.
Connect the dots and see all components of Geoengineering! 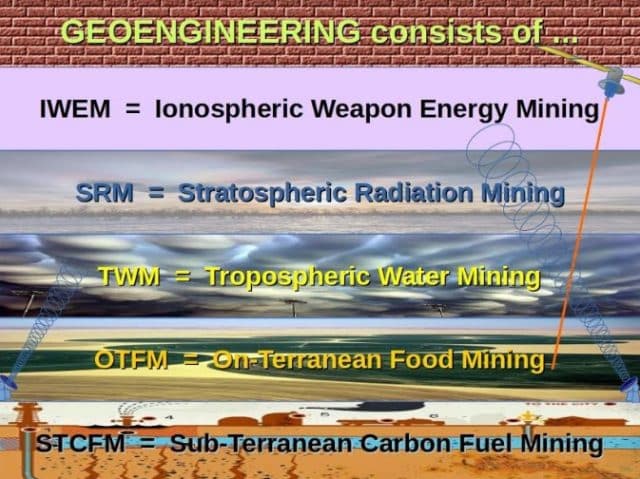