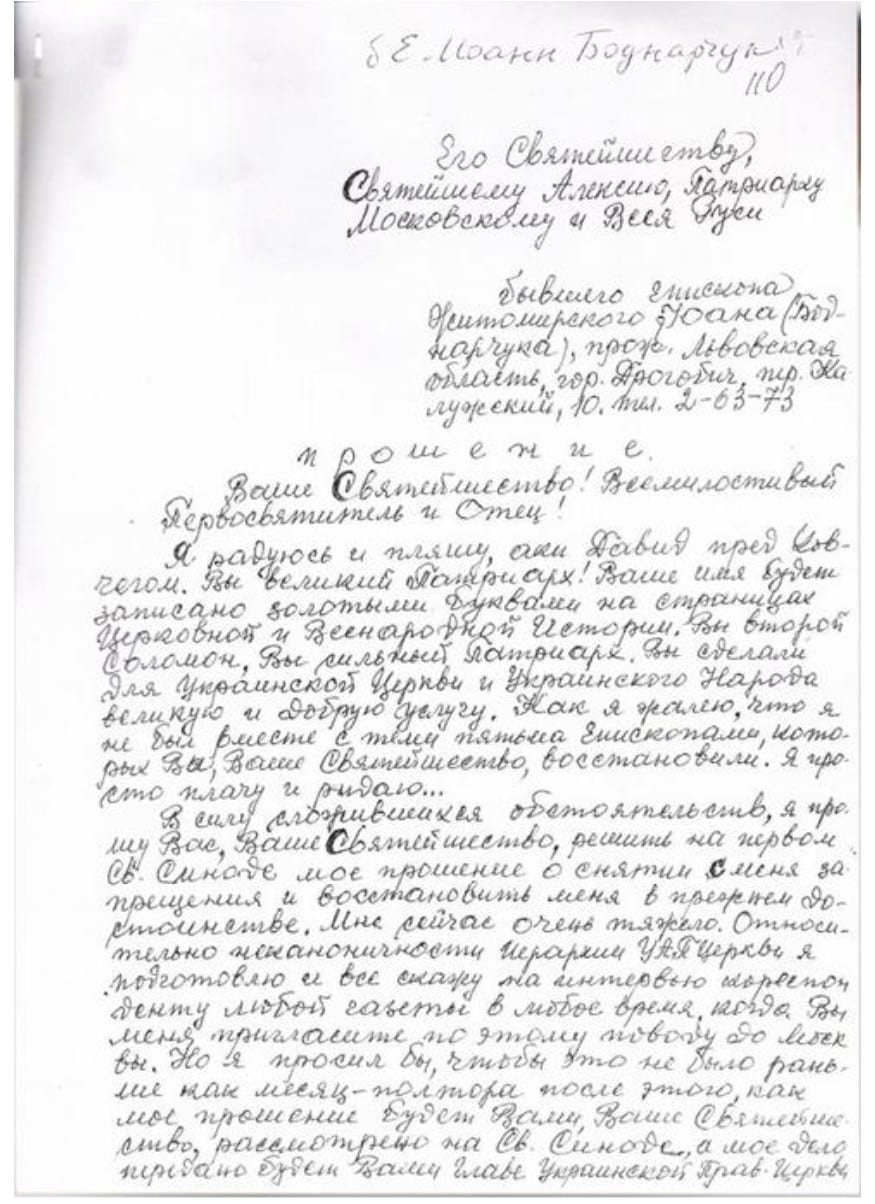 On August 25 this year, the Ukrainian website Cerkvarium, whose Director Dmitry Gorevoy said after last year’s visit of Patriarch Theodore of Alexandria to Ukraine that the Primate of the Patriarchate of Alexandria came for a bribe, once again attempted to prove that “ordinations” of the so-called “Orthodox Church of Ukraine” hierarchs who came from the Ukrainian Autocephalous Orthodox Church (UAOC) are canonical. 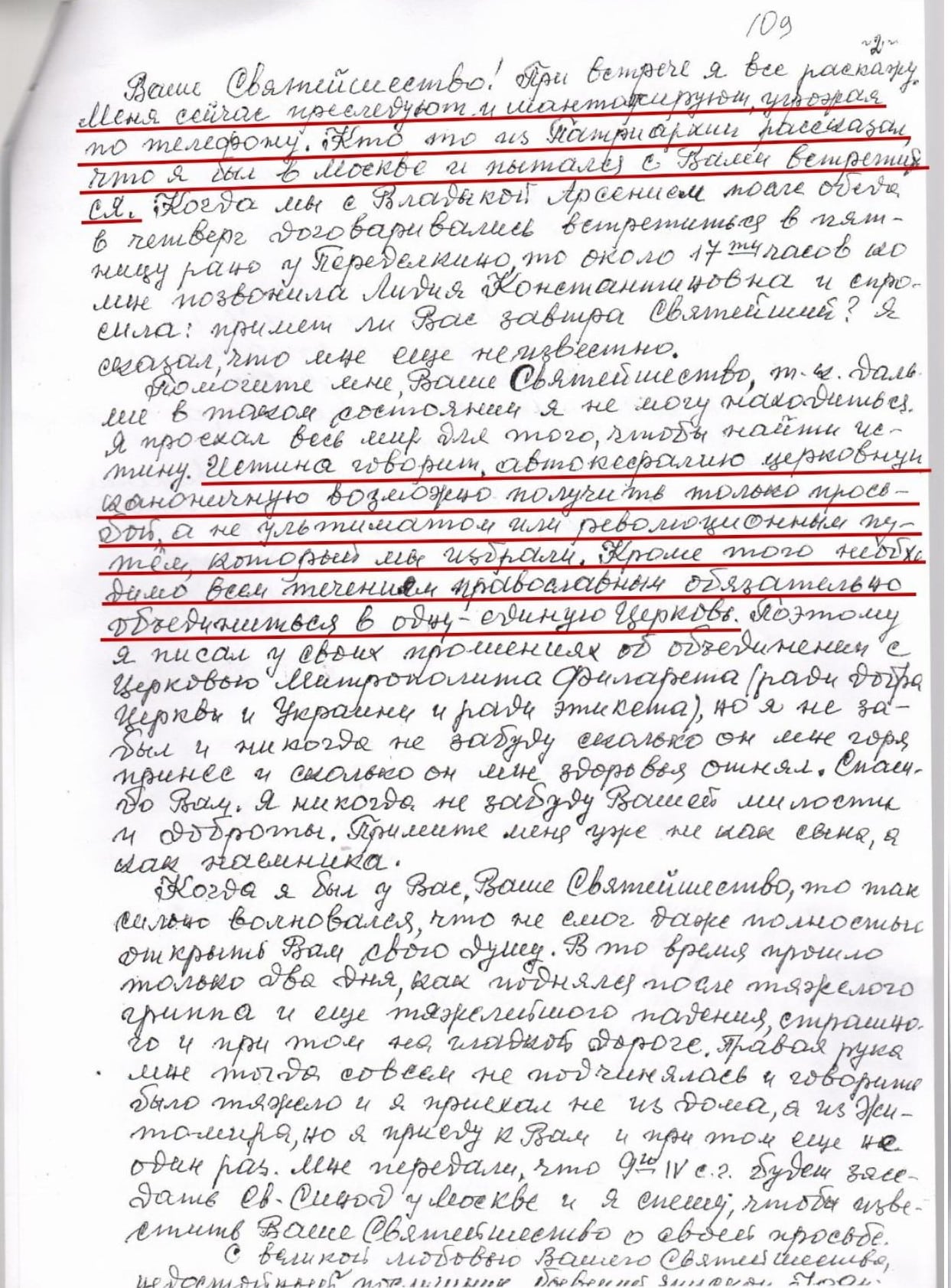 The article claimed that in addition to the famous adventurer, seducer of underage boys and impostor Victor (Vikenty) Chekalin these ordinations involved canonical Archbishop Varlaam (Ilyushchenko) of blessed memory, which was proved by the “Certificate of Ordination ” allegedly signed by Varlaam. 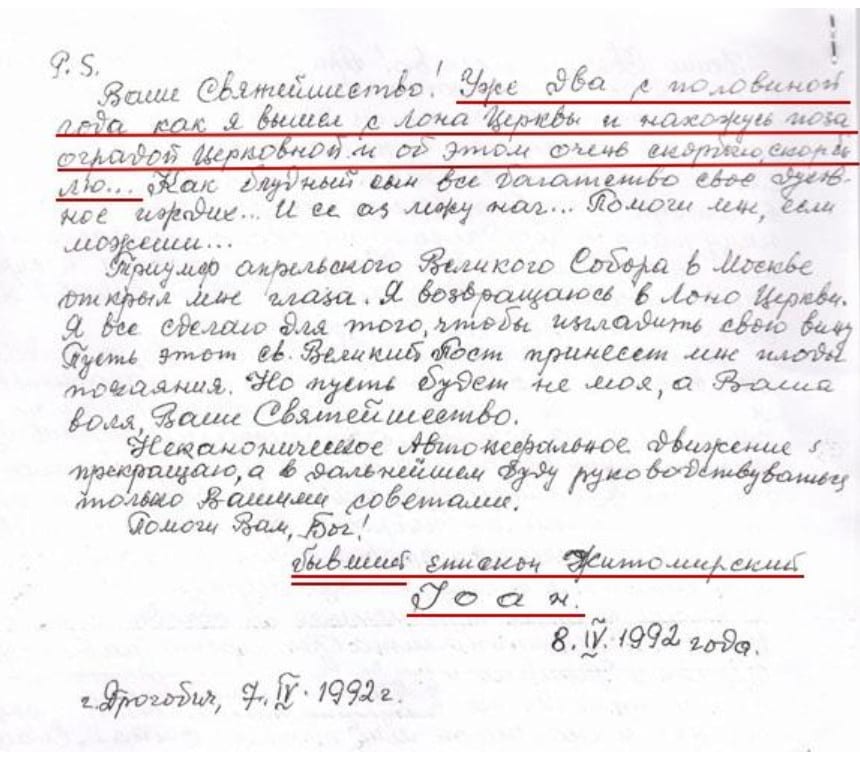 The article was immediately republished on Greek websites, including the unofficial blog of the Patriarchate of Constantinople fanarion.blogspot.com. It can be assumed that these publications were prepared in order to influence the Holy Synod of the Church of Greece, whose meeting began the next day after the article was released. 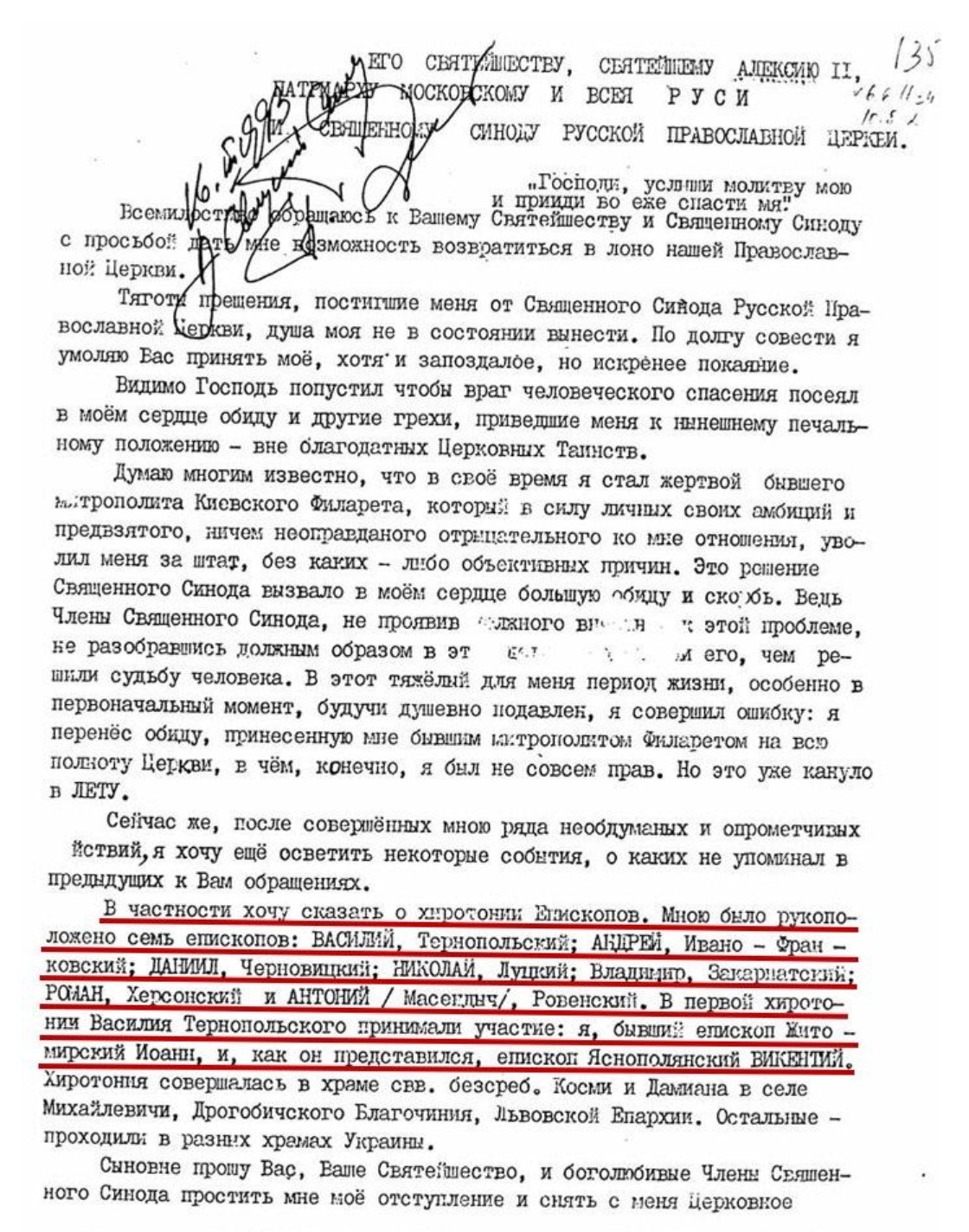 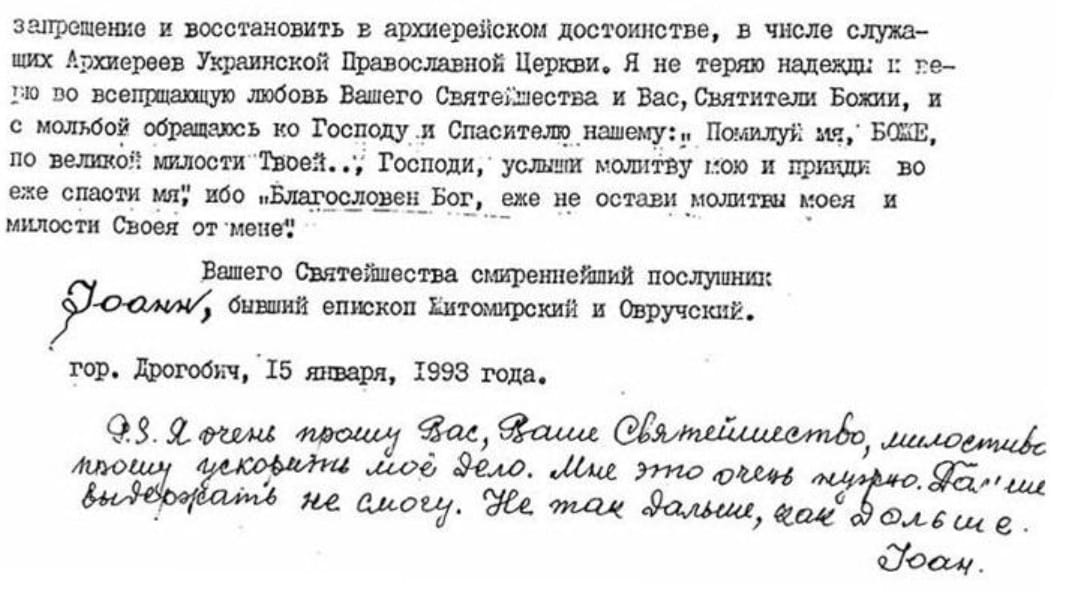 At the end of the Synod session, on August 30, a debate with the OCU supporters began with an article-refutation from Archpriest Nikolai Danilevich “On the canonicity of the UAOC ordinations: from Maximus the Cynic to Chekalin”. Father Nikolay Danilevich was given two responses: the first from the Cerkvarium, and the second from Archimandrite Roman Anastasiadis who apparently works in close coordination with the Cerkvarium editorial team. Both of these publications were not convincing. 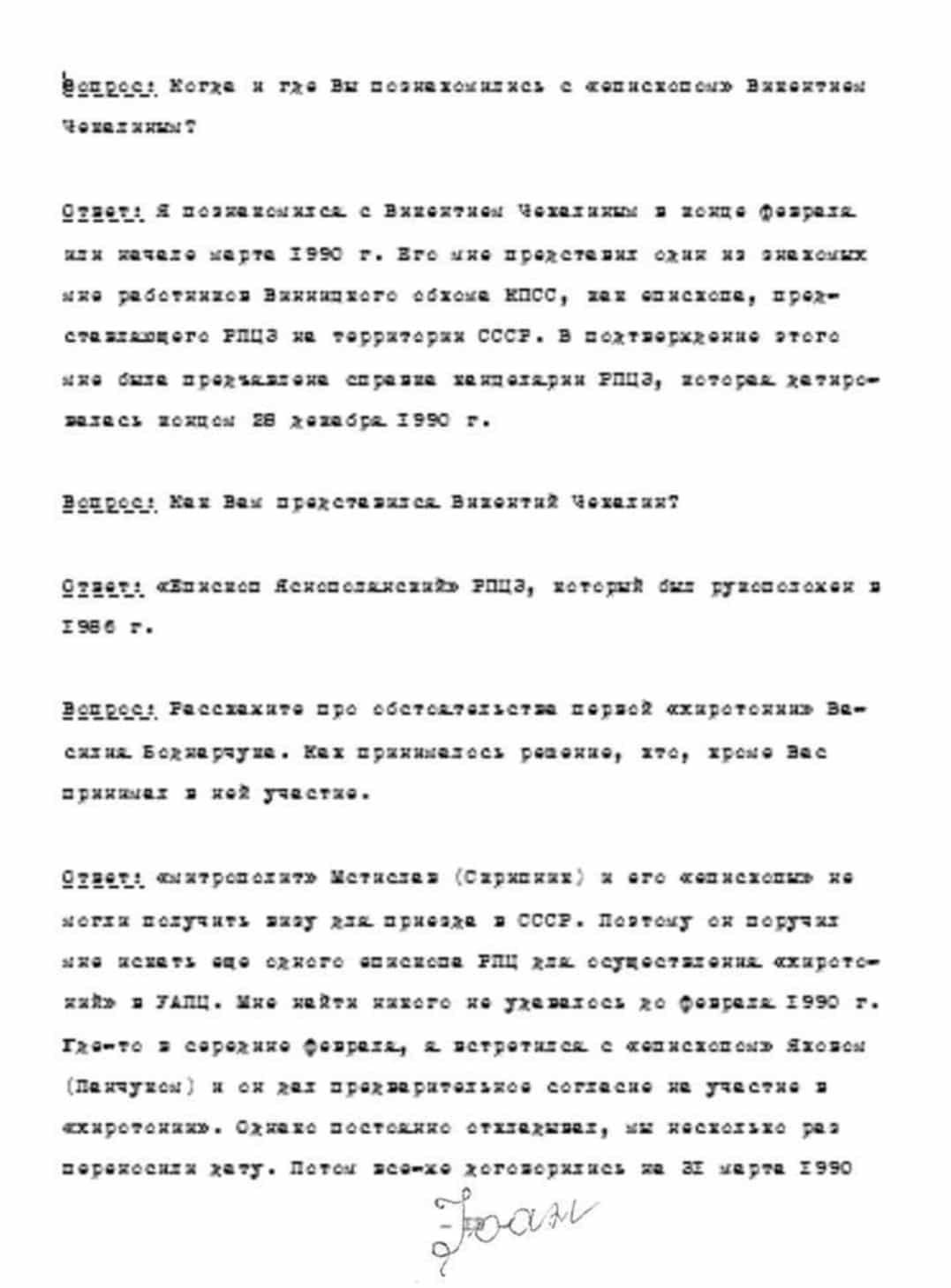 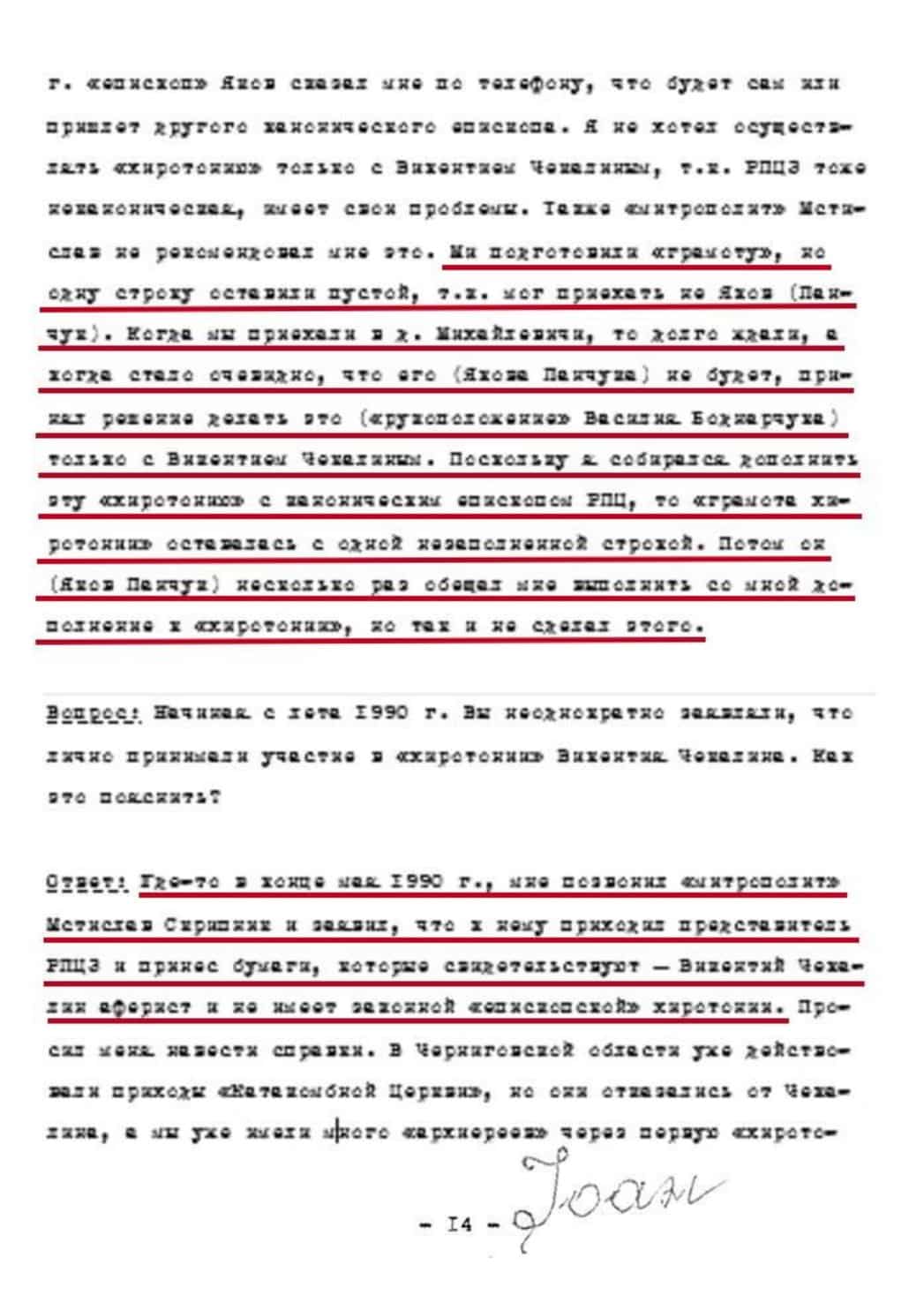 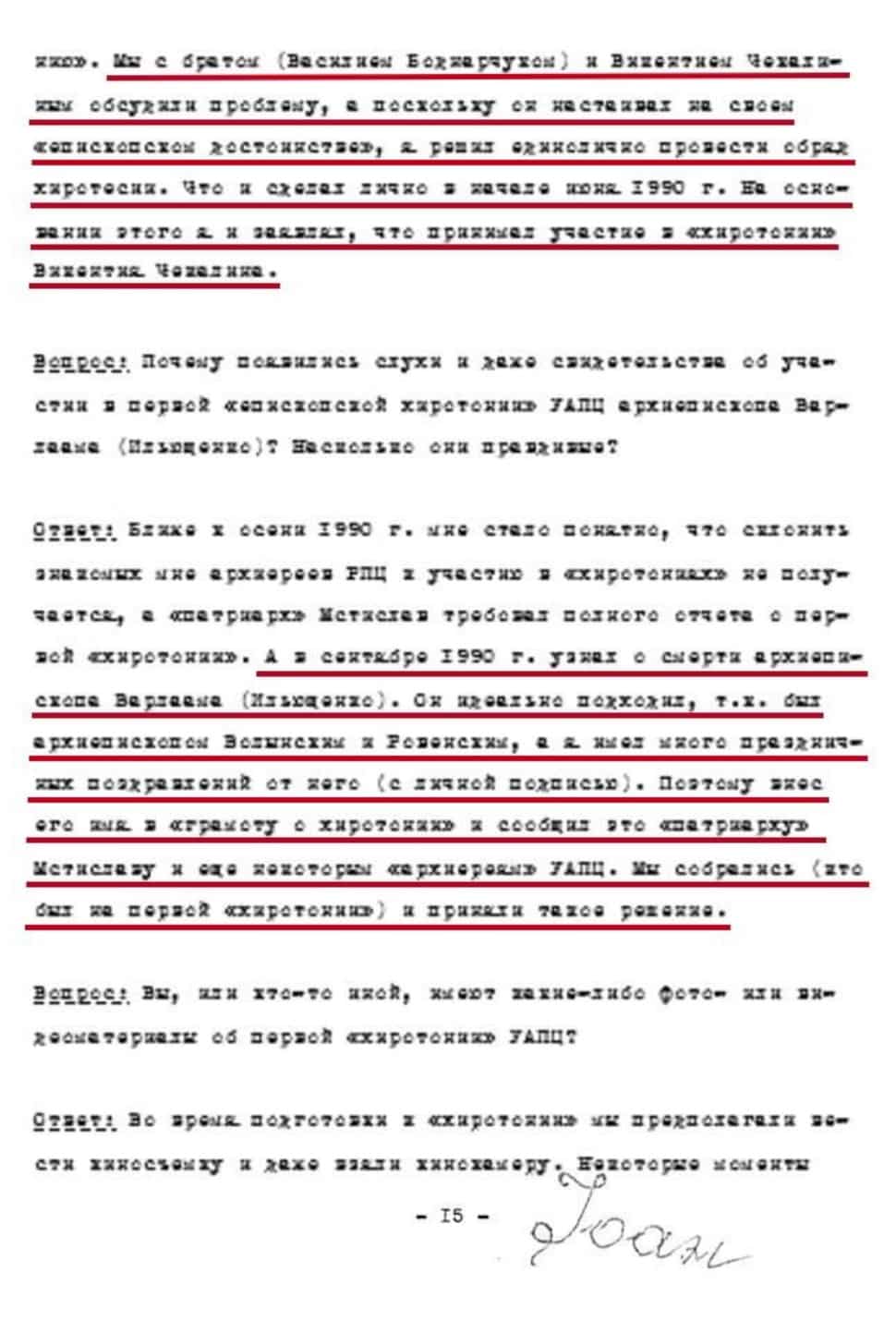 As the author of the site Radonezh Archpriest Rostislav Yarema mentions, in fact, a dubious “Certificate of Ordination” with a crooked signature of Archbishop Varlaam without his title is all that can be presented by the defenders of the “Chekalin ordinations”. At the same time, he cites a number of archival records signed by Ioann Bodnarchuk, which indicate that Archbishop Varlaam (Ilyushchenko) did not and could not take part in the establishment of the “hierarchy” of the UAOC, and Ioann Bodnarchuk simply forged his signature in the March 31, 1990 “Certificate of Ordination” of his brother, Vasily Bodnarchuk.

In the first document, Bodnarchuk directly acknowledges the lack of Episcopal grace after he was defrocked, the non-canonicity of the UAOC “hierarchy” created by him and Vikentiy Chekalin– and tearfully asks to accept him into the Church.

This is what he writes:

• “Regarding the non-canonicity of the UAOC hierarchy, I will prepare and say everything in an interview to a correspondent of any newspaper any time when you invite me to Moscow on this occasion”;

• “I am being harassed and blackmailed, threatened by phone. Someone from the Patriarchate must have leaked that I visited Moscow and tried to meet with you”;

• “a canonical autocephaly of a Church can be obtained only by request, not by ultimatum or revolutionary way, which we have chosen… The provision of autocephaly should be preceded by the restoration of the unity of the Ukrainian Orthodox Church”;

• “It is two and a half years since I came out of the bosom of the Church and am behind the Church fence, and I bewail it, I bewail”;

• “The non-canonical autocephalous movement must be stopped and we must be guided henceforth only by the advice of his Holiness the Patriarch”;

At the end of the letter Ioann wrote his title as “Former bishop Ioann of Zhytomyr.”

Unfortunately, the ROC did not have enough time to accept Ioann Bodnarchuk’s repentance. The Holy Synod considered that the decision on reinstating a canonically defrocked Bishop exceeded its powers, and referred the case to the upcoming Bishops Council. However, in the same 1993, Bodnarchuk abandoned his intentions and joined the uncanonical “Kyiv Patriarchate” of Filaret Denysenko, and in 1994 died in a car accident under mysterious circumstances.

Bodnarchuk’s penitential letter dated January 15, 1993, contains the exact list of participants of the “Chekalin ordinations” in the Lviv region in March-April of 1990. In the letter, it is stated that in the first “ordination” of Ioann’s brother Vasily Bodnarchuk “took part: me, Ioann, a former Bishop of Zhytomyr, and, as he presented himself, Bishop Vikenty of Yasnaya Polyana”. Listed are seven “bishops” appointed by Bodnarchuk and Chekalin (among them is, for example, the living Andrei Abramchuk, one of the oldest OCU “bishops”) but there is no mention of Archbishop Varlaam.

Finally, in the minutes of his interrogation, Ioann Bodnarchuk describes in detail how he and his supporters falsified the very “Certificate of Ordination “, which was published by the Cerkvarium. The details, features of speech and repeated signatures of Ioann leave no doubt about the authenticity of the document.

In late May 1990, shortly after the establishment of the UAOC “hierarchy”, the first “Patriarch” of the UOC KP and UAOC Mstyslav Skrypnyk received from the Russian Church Abroad information confirming that Vikenty Chekalin was a “swindler, and had no legal Episcopal consecration.” A way out of this situation was rather peculiar: Bodnarchuk in secret and single-handedly conducted a “rite of cheirothesia” (?!) to “ordain” Chekalin, and told Skrypnyk and the others that he “took part in the ordination of Vikenty Chekalin.”

But it seemed not enough, and Ioann Bodnarchuk with the knowledge of other participants of the “Chekalin ordinations” forged the signature of the canonical Archbishop Varlaam (Ilyushchenko) who died on September 17, 1990.

As he said, “We have prepared a “certificate” with one line empty because Yakov (Panchuk) could fail to come. When we arrived at Mikhailovichi village, we waited a long time, and when it became obvious that he (Yakov Panchuk) will not come, decided to do it <the “ordination” of Vasily Bodnarchuk> with Vikentiy Chekalin only. Since I was going to supplement this “ordination” with a canonical Bishop of the ROC, the “certificate of ordination” had one blank line. Then he (Yakov Panchuk) several times promised me to supplement the “ordination”, but never made it… Closer to autumn of 1990, it became clear to me that it was impossible to persuade the familiar ROC bishops to participate in the “ordinations”, while “Patriarch” Mstyslav demanded a full report on the first “ordination”. And in September 1990, I learned about the death of Archbishop Varlaam (Ilyushchenko). He was perfect for this, because he was Archbishop of Volyn and Rivne, and I had a lot of holiday greetings from him (with a personal signature). Therefore, I wrote his name in the “Certificate of Ordination” and reported it to “Patriarch” Mstislav and some other “bishops” of the UAOC. We gathered (those present was at the first “ordination”) and made this decision.”

These documents also confirm the falsity of the second testimony published by the Cerkvarium, that is a document about the alleged participation of Varlaam (Ilyushchenko) in the “ordination” of Vasily Bodnarchuk signed by an Igor Sas-Zhurakovsky, certified by Bodnarchuks and the father of the witness.

At least two of the four signatories of the document – Ioann and Vasily Bodnarchuks — knew about the forgery of the signature in Vasily’s “Certificate” and held an interest in concealing the truth. Senior and Junior Sas-Zhurakovskys, father and son, belonged to the UAOC, and cannot be considered unbiased witnesses. It’s unknown who is depicted in the video of the “ordination” mentioned by the Cerkvarium if it ever existed or if it can be used as evidence, as no one has ever seen it. However, given these documents, Bishop Varlaam, who remained faithful to the canonical Ukrainian Orthodox Church, definitely was not there.

As you can see, the “hierarchy” of the UAOC was founded in 1990 by two persons without Episcopal dignity, namely Ioann Bodnarchuk, who was defrocked in 1989, and a former deacon Vikentiy Chekalin. Knowing that the latter never had Episcopal dignity, Ioann Bodnarchuk was aware of the non-canonicity of the “hierarchy” created by him and forged the signature of canonical Archbishop Varlaam in his brother Vasily Bodnarchuk’s certificate of ordination of March 31, 1990.

And with these “bishops” the hierarchs of God’s Holy Churches are now invited to “concelebrate” as with brothers. After that, will anyone else ask questions why the Holy Synod of the Russian Orthodox Church recognized it impossible to continue concelebration with those who accepted such “hierarchs” into “canonical communion” with the stroke of a pen?

In this situation, the journalists of the Cerkvarium and fanarion.blogspot.com have only one way to save face. They must publicly recognize the “Certificate of Ordination” published by them as forged, and the “testimony of eyewitnesses” as false. It would also be great if they apologized to the Orthodox community.

The article was originally published on radonezh.ru