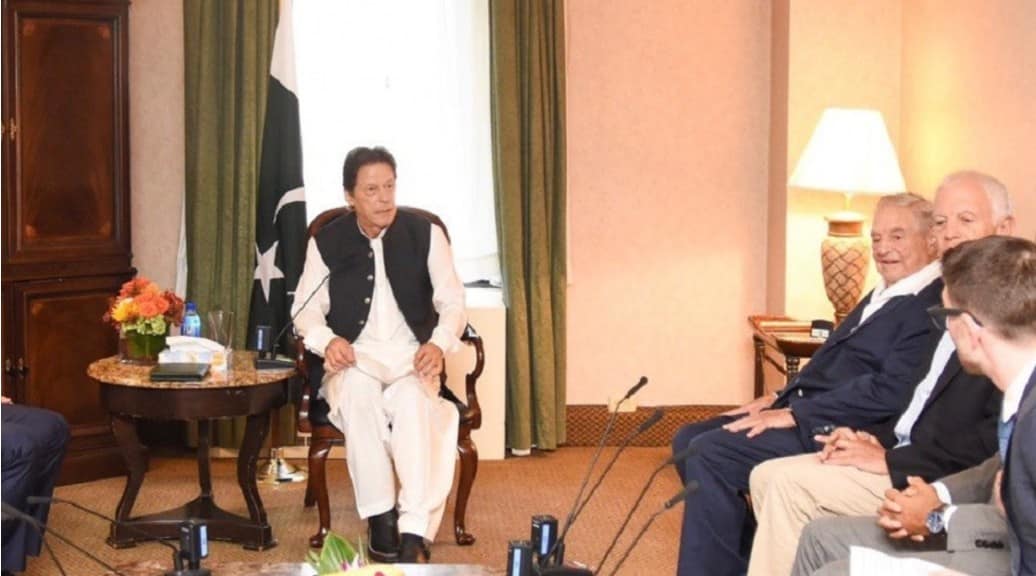 For the past few years it has become clear that RT and Sputnik News are organs of Israeli security, totally in the pocket of Jewish gangsters that control most of Russia’s underworld and pull the strings on Trump and Netanyahu.

Both media groups turn on Russia continually, sucking up to anything with a swastika while bashing anyone that stands up to Israel like, for instance, George Soros.

RT has it backwards and has, of course, stooped to childish Jew baiting to defend India, a client state of Israel led by Modi, the “mini-me” of Netanyahu.

It is Russia that has given India nuclear submarines with ICBM capability, advanced missiles nuclear weapons.  Now this Jewish run Moscow rag tries to put a knife in the back of Imran Khan for “hanging out with Jews” because he talks with Soros who stands up to the Moscow Kosher Nostra oligarchs that pulls most of the strings inside Russia and, of course, run Israel and Donald Trump.

Get short URL
The meeting between billionaire George Soros and Pakistani PM Imran Khan has apparently backfired for Khan, as the country’s Islamists saw it as a “proof” of his ties with Jews and vowed to oust the government.

The “war” on Khan has been announced by the leader of the Islamist political party Jamiat Ulema-e-Islam Fazl (JUI-F), Fazlur Rehman, who also leads an alliance of five right-wing and hardline-Islamist parties, known as Muttahida Majlis-e-Amal (MMA).

Rehman announced a major protest, dubbed ‘Freedom March,’ that will be held on October 27, warning the authorities against any attempts to disrupt it and assuring his supporters that the “war” will go on until the government falls. MMA, as well as other opposition parties have been repeatedly accusing Khan of rigging last year’s general elections and urging him to step down.

“The current government is the result of a fake election and fake results,” Rehman said during a press conference on Saturday.

While the alleged electoral fraud has been on the table for the opposition for quite some time, the last straw was a meeting between Khan and the founder Open Society Foundation, billionaire George Soros on the sidelines of the UNGA late in September.

The meeting prompted a very angry reaction among Pakistani Islamists. Rehman accused Khan of being a “Jewish agent” striving to turn the country into a puppet of foreign players.

“By meeting that infamous Jew, [Khan] has made it clear that [his government] doesn’t want to bring reforms in religious education. They want to make Pakistan’s educational system subservient to the West,” Rehman stated.

The Soros-Khan talks have sure come in handy for Rehman, as he has repeatedly accused Khan of having close ties to Jews – as well as the US – and declared in 2013 that voting for him was ultimately “haram” (forbidden) for true Muslims. When asked for proof back then, however, Rehman said his own word was enough, since such a righteous man as he is would never speak ill of anybody.

So far, the exact details of the upcoming ‘Freedom March’ protest have not been announced, yet media reports suggest it will be an all-men event, with the women being banned from attending it altogether.