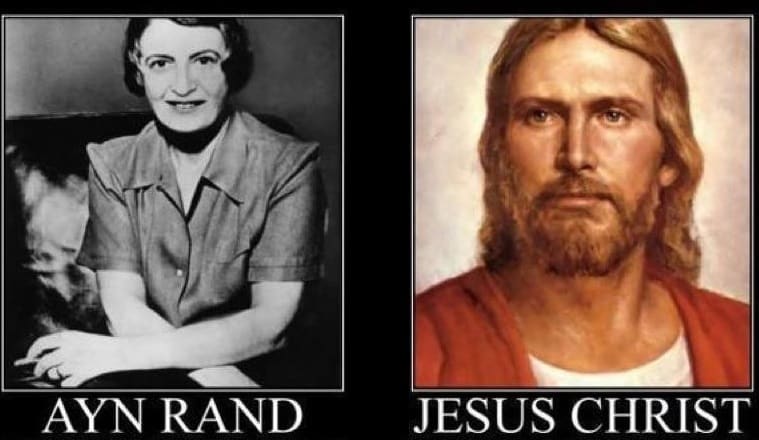 The religious right has made a virtual goddess out of Ayn Rand (born Alisa Zinovyevna Rosenbaum). Rand’s books, in particular The Fountainhead and Atlas Shrugged, promote her open love of greed and selfishness, as well as her deep hatred for altruism. Around the world politicians on the right, particularly in the US, have promoted her Objectivist philosophy and incorporated it into austerity laws and other laws that reward the 1% and punish the 99%, and which are devastating to the working poor.

Many people in the religious left believe that Rand’s philosophy is in direct contrast with the teachings of Jesus. (There is a very good chance that Jesus never even existed as a mere human being, let alone as the son of God. Here is a page with two articles, one taking the position that Jesus did exist as a man, and the other that Jesus is pure myth and never existed even as a man.) However, objectively reading the Christian Bible, we see Jesus was not at all the peace and love hippie type the religious left view him as.

Regarding greed and selfishness, which in and of themselves prohibits altruism, Jesus was on the same page as Rand. For example, why did Jesus tell people to give to the poor? Was it simply because it is the right thing to do and will help a fellow human being? No. It was because the person giving to the poor will get a much bigger reward from God! This is seen in Matthew 6:1-6 which says that Jesus said (IF Jesus really did exist, he wrote nothing himself and all there is to go on are hearsay statements by the anonymous authors of the Gospels which, at the behest of Roman Emperor Constantine, were voted to be part of the Word of God/the Bible):

The end goal of the above teaching the anonymous author of the Gospel of Matthew attributes to Jesus is a personal reward. This is in line with the Objectivism philosophy started by Ayn Rand, and is based on selfishness and greed.

Another Bible verse that is Randian to the extreme is found at Luke 6:38 and has Jesus saying:

“Give, and it shall be given unto you; good measure, pressed down, and shaken together, and running over, shall men give into your bosom. For with the same measure that ye mete withal it shall be measured to you again.”

Luke 6:38 not only aligns with Rand and her Objectivism, it is strongly and frequently promoted by Christian prosperity preachers like Joel Osteen and Kenneth Copeland, to motivate the faithful to give to their ministries/businesses to ensure their ability to purchase new jet planes, mansions and $23,000.00 toilets.

One more, among several more, example of Jesus and Ayn Rand being on the same disgusting wavelength regarding greed is found at Matthew 25:14-30. In this ungodly example, Jesus compares God to a greedy bastard who brutally and cruelly punishes a servant/slave for returning the money he left with him without “usury”/interest. Verses 28-30 have Jesus sounding like Ayn Rand. They say that Jesus said:

“Take therefore the talent from him, and give it unto him which hath ten talents. For unto every one that hath shall be given, and he shall have abundance: but from him that hath not shall be taken away even that which he hath. And cast ye the unprofitable servant into outer darkness: there shall be weeping and gnashing of teeth.”

Jesus (IF he existed) and Ayn Rand were both Jews. As Jews they favored the Jewish state of Israel. ((It is not intended to claim all Jews favor Israel’s brutality, as Albert Einstein made clear when he wrote, “Should we be unable to find a way to honest cooperation and honest pacts with the Arabs, then we have learned absolutely nothing during our 2,000 years of suffering and deserve all that will come to us.”) The Zionist Christian John Hagee points this out regarding Jesus in his Seven Biblical Reasons Why Christians Should Support Israel. One of the reasons Hagee uses is based on Jesus deciding to help a Roman centurion by healing his servant after Jewish elders told Jesus that the centurion had built a synagogue for them and that he was good for Israel. This story is found at Luke 7:1-10.

Ayn Rand, and her Objectivism philosophy, not only promote greed, they also favor the Jewish state of Israel. She supported the Jewish state of Israel’s cruel and expanding occupation of Palestinian land and supported Israel in the 1973 Yom Kippur War. A war which was started by Egypt and Syria in efforts to take back the Sinai and Golan Heights from Israel, which were taken in the Six Day War in 1967, a war which Israel started. Now the Ayn Rand Institute, under the direction of its chairman of the board Israeli-American Yaron Brook, is promoting war against Israel’s enemy Iran, just like they did regarding the horrific US war against Iraq. That war, too, was fought for the benefit of the Jewish state of Israel, and for the benefit of greedy and selfish US politicians from both parties who do all they can to please Israel and its powerful lobby.

Her attacks against altruism ring hollow because when she wanted to leave her home in the Soviet Union, she came to a nation that would not exist if it wasn’t for the altruism of many of its founders: America. Based on the selfishness and anti-altruism promoted by Rand, successful people like Thomas Jefferson, Ben Franklin and George Washington were wrong to risk all they had for the ideal of the American Republic. And other founders who were not wealthy, like Thomas Paine, were wrong to risk what little they had to support the American Revolution and its ideals. She must have really hated Paine, since he gave away his first financial windfall, which he earned with the sale of Common Sense, to the cause of the American Revolution. I’m profoundly thankful America’s Founders were not infected with the kind of thinking Jesus and Rand promoted.