[ Editor’s Note: Putin keeps hammering away on this key position, that all armed forces inside Syria illegally should leave. This puts the US and NATO forces on the same level as the jihadis and terrorists.

And he says below that this will include Russia when Syria says, “Thank you very much, but we no longer require your services.” But that would not include the 50-year leases that Russia has on its two bases there.

The interview style differences between Trump and Putin are as different as a child and grownup. Putin can actually read briefings, pose key questions to his verbal briefers, and gain their trust and confidence that he is constantly on top of what is going on.

Trump on the other hand, fakes it by “going on how he feels”, which is exhibited via his Twitter crutch that he uses to pretend to be in control, when that is just a media-hogging tool to keep the focus on himself and put his adversaries on the defensive each morning.

Putin has some reputation danger now in Syria due to the report that Turkey, the US and Russia are coordinating the Erdogan incursion. That makes them co-responsible for any atrocities perpetrated by Turkish forces and militias, as those talks give the indication that some redlines have been agreed to.

I predict that Turkey’s so-called safe zone is not going to look much like one when this initial phase is over. It’s a lose-lose situation for Trump. He can trot out all the nonsense of “bringing the troops home”, but his feet are cast in concrete for his using proxy terror forces against Damascus, just like our Nobel Peace Prize former president … Jim W. Dean ] 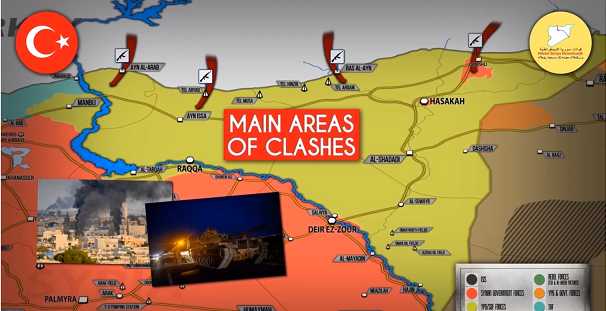 The territorial integrity of Syria must be fully restored and all foreign forces should withdraw, including Russia if Damascus decides it doesn’t need Moscow’s help anymore, according to President Vladimir Putin.
–

“All the forces deployed illegitimately inside any sovereign state – in this case Syria – must leave,” Putin said in a joint interview with RT Arabic, UAE-based Sky News Arabia, and Saudi Arabia’s Al-Arabiya broadcasters.

This is true for everyone. If Syria’s new legitimate government chooses to say that they have no more need for Russia’s military presence, this will be just as true for Russia.

Meanwhile, Moscow’s stance on the settlement in Syria remains unchanged and was already relayed to its partners Iran, Turkey and the US, the president noted. “Syria must be free from other states’ military presence. And the territorial integrity of the Syrian Arab Republic must be completely restored.”

Earlier this month, US President Donald Trump announced the withdrawal of US troops from border areas in northeastern Syria, saying it was time to “get out of ridiculous endless wars.”

Unlike the Russian military, which arrived in the country at an invitation of the government in Damascus, US forces have been in Syria illegally since 2016. The Syrian government has repeatedly blasted the American military presence as a violation of its sovereignty.

Putin was also asked about Moscow’s attitude towards NATO’s eastward expansion and buildup near Russian borders.

“We are not happy about it… and voiced our concerns,” he replied.

Claims that Russia “has nothing to fear” and that NATO “does not have belligerent intentions” shouldn’t be taken for granted as long as “the North Atlantic Treaty remains in place, in particular, Article Five… which guarantees military support to other members.”

During the interview, the Russian leader decried attacks on oil tankers in the Persian Gulf, no matter who was behind them. He also urged Iran’s neighbors to “respect” the interests of Tehran as a country that has “existed on its territory for thousands of years,” and praised the increasing level of Russia’s cooperation with Saudi Arabia and the UAE within the OPEC+ format and on a bilateral level.