[ Editor’s Note: Trump will be on the spot today, to put up or shut up on his bold “red line” threats he made to Erdogan about doing anything to the Kurds that was not necessary. I think executing civilian non-combatants at roadblocks solely due to their SDF identification would qualify.

The SDF is a coalition that even includes Arab groups – all well known to the advancing Turkish army and its proxies.

The Kurdish leadership will bear a lot of responsibility for what happens. It appears to have made no plans to get civilians out of the border area, choosing instead to let them remain in place to use their deaths and tragedies for propaganda purposes. We will see how well that flies in the next few days.

I watched a video yesterday of a lot of journalists on the floor, in what appeared to be a school that already had shelling damage. No one seemed to be in a big hurry to go outside looking for frontline news.

Rocket fire does not care who you are; and the Turks were using general shelling munitions, something whose main purpose is to blast any remaining civilians out of their houses and onto the roads, where they can become targets for the Turkish Air Force.

We will be watching how much coverage this summary execution news gets. You can see how undisciplined the Turkish militias are, shooting clearly civilian vehicles; and then the cowards who think it’s cool pumping rounds into an already dead victim to see themselves on video.

Erdogan will own all of this, but that will not bother him. This is the guy that funded ISIS by buying its oil, looted Aleppo, and supplied the jihadis in Idlib for years now… Jim W. Dean ]

In an official statement, the political wing of the Syrian Democratic Forces (SDF) revealed that Harvin was ambushed and captured by Turkish-backed militants on the M4 highway in northeast Syria. Harvin was immediately executed by the militants, along with her driver.

“This is a clear evidence that the Turkish state is continuing its criminal policy towards unarmed civilians. Professor Hevrin Khalaf, was the Secretary General of the Future Syria Party, a party with a political orientation towards Syria in general, is far from military agendas,” the SDC’s statement reads.

The M4 highway, which links al-Hasakah, Raqqa and Aleppo, was blocked by the Turkish-backed National Syrian Army (NSA) in the early hours of the morning.

Following the SDC’s announcement, opposition activists released videos showing Turkish-backed militants capturing and executing civilians on the highway. One of the videos shows an armored SUV that was reportedly carrying Hevrin.

The video will not play on VT. Go here to watch it on Southfront. 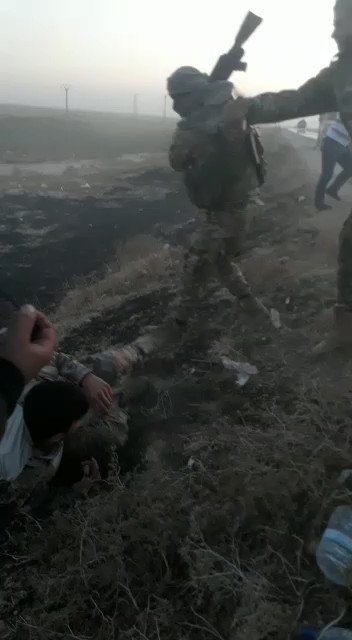 Here are the murderer gangs of leader of Future of Syria Party MARTYR Hevrin Khalaf.

Formed in 2018, the Future Syria Party is one of the biggest Arab political movements in northeast Syria. The party is a key ally of the Kurdish-dominated SDF, which controls the region.

Ankara is yet to comment on the murder of Hevrin, who had criticized and condemned the Turkish-led Operation Peace Spring in northeast Syria.