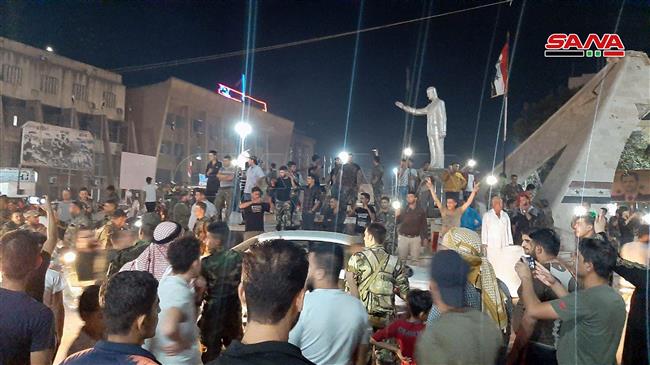 [ Editor’s Note: The speed with which this deployment was done indicates that it started several days ago. Our Syrian sources tell us that Damascus and the Kurds have been meeting at the Russian air base.

The plan generally seems to follow what VT proposed yesterday as the most feasible way to block the Turks and solve some of the key political issues between the Kurds and Damascus.

That involved the Kurds agreeing to give up Arab territories they had taken over with US help, where the SAA would redeploy there and Turkey would lose its cover of wanting to clear out terrorists in those areas.

This withdrawal would allow the Kurds to concentrate their people, and have tighter defensive lines and better control over refugee work over the traditional areas where they have lived when all of this started.

The US has given no justification for the attack on the Syrian column today – again another good reason why the US should get out, as it has been a spoiler for too long. Watch now to see if the Turks don’t take the hint.

Syria has air power it can use, whereas Russia would prefer not to use its own against Turkish positions; but that might change if Turkish planes bomb Russian positions helping the Syrian advance. That said, the Kurds have killed Russians before with nothing done, as the economic tie Moscow has with the Kurds trumps a few dead soldiers… Jim W. Dean ]

Syrian army troops have entered the towns of Tabqah, Ain Issa and Tel Tamer in northeastern Syria after Damascus reached an agreement with Kurds in the region to deploy troops in the area, state media report.

The deployment to Tabqah near Raqqah on Monday restores the state’s foothold in an area that is home to a major hydroelectric dam. The state television, in broadcasts from Ain Issa, showed residents welcoming the entry of the army troops.

Tel Tamer is 35 km southeast of Ras al-Ain which is currently under the control of Turkish troops. It is on a strategically important highway, the M4, that runs east to west. Turkish forces said they had seized the highway on Sunday.

Syrian Kurds on Sunday struck a deal with the government in Damascus on the deployment of Syrian army forces near the northern border after US troops pulled out of the region ahead of a Turkish incursion.

The so-called Syrian Observatory for Human Rights said US warplanes had targeted a column of Syrian troops in the city of Raqqah in an apparent attempt to hinder their deployment to the north.

The US military also tried to hinder the dispatch of Syrian and Russian forces near Manbij, the London-based war monitoring group said. Kurdish authorities said the deal “paves the way to liberate the rest of the Syrian cities occupied by the Turkish army such as Afrin” in northwest.

Ankara says the operation is meant to purge YPG militants, the backbone of the US-backed SDF militant group, which Turkey views as terrorists linked to local militants of the Kurdistan Workers’ Party (PKK).

Residents of the northern city of Qamishli on Sunday celebrated the announcement that the Syrian troop deployment. People were seen on motorcycles and standing on vehicles, dancing and waving Syrian flags in the streets of Qamishli, AFP news agency reported.

Crowds of people also gathered in the streets of Hasakeh to celebrate the planned deployment of government troops. They waved national flags and blared horns to celebrate the army build-up.

Rami Abdel Rahman, head of the so-called Syrian Observatory for Human Rights monitoring group, said Kurdish authorities had “made compromises to Syria in order to stop the advance of the Turkish forces in the north.”

SDF chief Ferhat Abdi Sahin, also known as Mazlum Abdi, acknowledged that “there would be painful compromises” with the Syrian government in a bid to save the lives of people.

“In light of the invasion by Turkey and the existential threat its attack poses for our people, we may have to reconsider our alliances,” he said in an opinion piece published in the US Foreign Policy magazine on Sunday.

Badran Jia Kurd, a senior Kurdish official, said the Kurds felt they had no choice but to turn to Damascus in the face of the “betrayal” of Washington, noting, “This has obliged us to look for alternative options.”

Since it was launched on Wednesday, the Turkish military incursion has killed dozens of people and displaced tens of thousands of Syrians. On Sunday, President Tayyip Erdogan said Turkey’s incursion will stretch from Kobani in the west to Hasakeh in the east, going some 30 km (19 miles) into Syrian territory.

“We focused first on the 120-km area between Ras al-Ain and Tel Abyad. Thus we will divide the 480-km terrorist corridor down the middle,” Erdogan said.

“Then we will take control of Hasakeh on the one side and Ain al-Arab (Kobani) on the other and complete the operation,” he said, referring to towns either side of the current focus of operations.