[ Editor’s Note: Because Trump conned North Korea into talks, where we all thought there would be a step-by-step easing of US sanctions in return for North Korea dismantling its nuclear weapons program, we now find ourselves at a dead end.

Even that step was a risky deal for NK, because then Trump could reimpose sanctions again by pulling some reason out of his behind, which he has no embarrassment in doing. Changing his mind and backing out of deals is a major Trump presidential legacy.

But after a couple of grandstanding media shows, Trump revealed he wanted NK to completely dismantle everything FIRST. That demand was dead on arrival, so NK began its testing again; and here were are in the middle of nowhere for making progress.

I don’t think Trump was ever serious about the talks, that he just did them to get the easy headlines, as he thinks that is the primary job of a president. And then when nothing gets done, he blames others, something we have seen him do all of his career, in business and his criminal activities.

Does Trump care? No, he doesn’t. Welcome to Donald’s world… Jim W. Dean ] 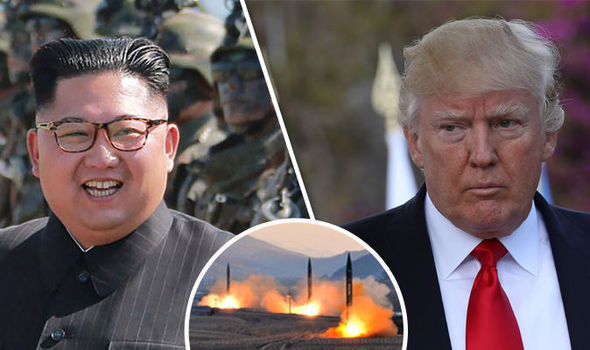 On 2 October 2019, North Korea carried out yet another (11th since the start of the year) missile launch, which has caused a much bigger uproar than the test firing of short-range missiles or of a “super-large” multiple rocket launcher (MLRS) that we had reported on earlier this summer.

First of all, (in the author’s opinion, due to the current lack of coordination among Western allies stemming from South Korea’s withdrawal from the General Security of Military Information Agreement (GSOMIA) it was not immediately clear what had actually been launched.

Japan’s Minister for Defense Tarō Kōno stated that the missile reached a maximum altitude of 900 km and split in two, with one part landing within the Japanese Exclusive Economic Zone, 350 km from the coast of Shimane Prefecture. And it did not cause any damage to fishing vessels in the area at the time.

South Korea’s Joint Chiefs of Staff reported about a launch of a number of unidentified missiles in the direction of the East Sea from a neighborhood in the city of Wonsan in Kangwŏn Province. Information regarding the time of the launch and the missile’s time of flight varied greatly.

In the end, ROK’s military personnel agreed to conduct a study to determine the exact characteristics of the missile and Pyongyang’s intentions with the aid of closer cooperation between intelligence agencies of South Korea and the United States.

Moreover, ROK’s Minister of National Defense Jeong Kyeong-doo stated that South Korea had asked Japan to share the information it had gathered about the missile test, since the intelligence-sharing agreement between Seoul and Tokyo remained in place for now.  In fact, the GSOMIA is due to expire on 24 November and the exchange of information between the two countries should continue up until that date.

In the end, the Korean Central News Agency (KCNA) clarified the situation: North Korea’s Academy of National Defense Science conducted a successful missile test of Pukkuksong-3 (a new type of ballistic weapon) from a submarine.

The KCNA said: “The test-firing scientifically and technically confirmed the key tactical and technical indexes of the newly-designed ballistic missile,” which was launched “in vertical mode.” The agency added that the missile test “had no adverse impact on the security of neighboring countries,” but it was “of great significance as it ushered in a new phase in containing the outside forces’ threat to the DPRK and further bolstering its military muscle for self-defense.”

According to available data, the ballistic missile flew 450 km and reached a maximum height of 910 km. The DPRK has launched its intercontinental ballistic missiles (ICBMs) in a similar manner, which means that such a weapon when following its typical trajectory would fly 2,000 to 2,500 km.

At present, experts are debating whether the missile was launched from a sea-based platform or from a submarine. Let us recall that as far back as 20 September 2019, Japan’s NHK channel, which got its hands on satellite images of Sinpo shipyard on DPRK’s eastern coast, reported that North Korea was actively preparing for a launch of a new submarine that could carry ballistic missiles on board.

The last time the DPRK test-fired a submarine-launched ballistic missile (SLBM) was in August 2016. Pukkuksong-1 flew about 500 km. In February 2017, Pukkuksong-2 was successfully tested. According to statements issued by the DPRK, such a ballistic missile was capable of carrying a nuclear warhead. The estimated maximum distance the previous versions of the missiles could fly was approximately 1,300 km.

Pukkuksong-3 made its first appearance on 23 August 2017 on posters with images of Kim Jong-un visiting DPRK’s Chemical Material Institute of the Academy of Defense Sciences, and it is logical to assume that up until now missile guidance specialists had been finishing their work on the missile.

In addition, the test-firing coincided with a whole range of other events. To begin with, on 2 October the United States conducted test-launches of Minuteman-III ICBM from the Reagan Test Site on Kwajalein Atoll (in the Pacific Ocean) and of its interceptors from Vandenberg Air Force Base in California.

However, they were probably carried out in response to Russia’s launch of Topol-M ICBM on 30 September ahead of large-scale Strategic Nuclear Force Exercises of the Russian Federation called Thunder (‘Grom’).

Still, the DPRK’s test could have been conducted to coincide with South Korea’s military parade on 1 October, to mark Armed Forces Day, where South Korea showcased F-35 stealth fighter jets (the ROK is planning on purchasing 40 of them by 2021).

North Korea has actively criticized the Republic of Korea for this, as this aircraft is certainly not meant for defense purposes. And in the opinion of Pyongyang, the purchase is a violation of the 2018 inter-Korean military agreement aimed at preventing military confrontation between the two sides.

In addition, the test firing occurred ahead of negotiations (conducted from 4 to 5 October) between the DPRK and the United States working groups, which did not end well. Hence, most South Korean experts viewed the missile launch as an attempt by the DPRK to raise the stakes before the important meeting, during which significant progress could have been made on the issue of denuclearization.

So what was the U.S. reaction? Donald Trump suggested adopting a wait-and-see approach. The United States Department of State called on Pyongyang “to refrain from provocations, abide by their obligations under U.N. Security Council Resolutions, and remain engaged in substantive and sustained negotiations to do their part to ensure peace and stability on the Korean Peninsula and achieve denuclearization.”

During a telephone conversation on Thursday, U.S. Secretary of Defense Mark Esper and Japan’s Minister for Defense Tarō Kōno agreed that DPRK’s latest missile launch was a provocation that did not aid diplomatic efforts.

Stephane Dujarric de la Rivière, the Spokesperson for the United Nations Secretary-General, said the test firing of the ballistic missile was a violation of U.N. Security Council Resolutions. He added that the U.N. Secretary-General hoped that both parties would “work to sustain these talks and to make progress towards denuclearization and peace on the Korean Peninsula” (as envisioned in the DPRK-U.S. Joint Statement from 12 June 2018).

South Korea’s National Security Council expressed their grave concerns about the test firing at its emergency session, i.e. a video conference held on Wednesday morning immediately after the reports about the launch had come out.  Colonel Lee Peters, a spokesman for US military forces in South Korea, briefly commented that they were continuing to monitor the situation and were in close consultations with the allies in the region.

ROK’s media outlets reported that the launch of the ballistic missile was yet another provocative move by Pyongyang. So apparently, North Korea’s test-firing of short range missiles had not been a violation of the military agreement from 19 September 2018. But the SLBM launch altered the state of the dialogue, as tests of ballistic missiles violate U.N. Security Council Resolutions.

Voice of America added that Pyongyang failed to inform the International Maritime Organization (IMO) about the tests ahead of time (the latter issued an email to this effect). The DPRK joined the IMO in 1986, thereby agreeing to notify the organization about any missile launches in the interests of safety of civilian vessels.

Let us draw some conclusions.

North Korea’s SLBM program (along with its ICBMs) is viewed as the biggest threat to the United States and its allies because it is harder to detect such missiles ahead of time.  Their range of 2,000+ km allows them to reach targets in the Republic of Korea and Japan, even if launched from land.

It is no exaggeration to say that submarines equipped with such ballistic missiles substantially increase DPRK’s military capabilities. Firstly, since its military personnel could target places in the entire region, and also do so by missiles following trajectories that make it more difficult for anti-ballistic missile systems to counter them.

Secondly, DPRK’s submarines are becoming a geopolitical threat to the United States not only on the island of Guam but also in Hawaii. Thirdly, it is much easier to modify a ballistic missile so that it can be launched from land, rather than vice versa.

As for the reasons behind the exercise, the missile was launched either as a test, or in response to the events on 1 October or ahead of the negotiations with the United States. What is important is that the test firing demonstrated a certain degree of pessimism felt by the DPRK towards the future of these negotiations, and its willingness to show that it could be a tough opponent if the talks broke down.

And using a medium-range missile that can be launched from a submarine is a more convincing gesture than testing a short-range missile. If Pyongyang has indeed raised the stakes to such levels, there is a possibility that they have overplayed their hand.

And if needed, these developments may be interpreted as a violation of the moratorium and the dialogue could be severed using similar phrases employed by Pyongyang (i.e. the DPRK government talks of peace and demands a new approach, but then ends up testing ballistic missiles). And although for now the United States has adopted the wait-and-see approach, the tensions on the Korean Peninsula rose a notch after DPRK’s move.