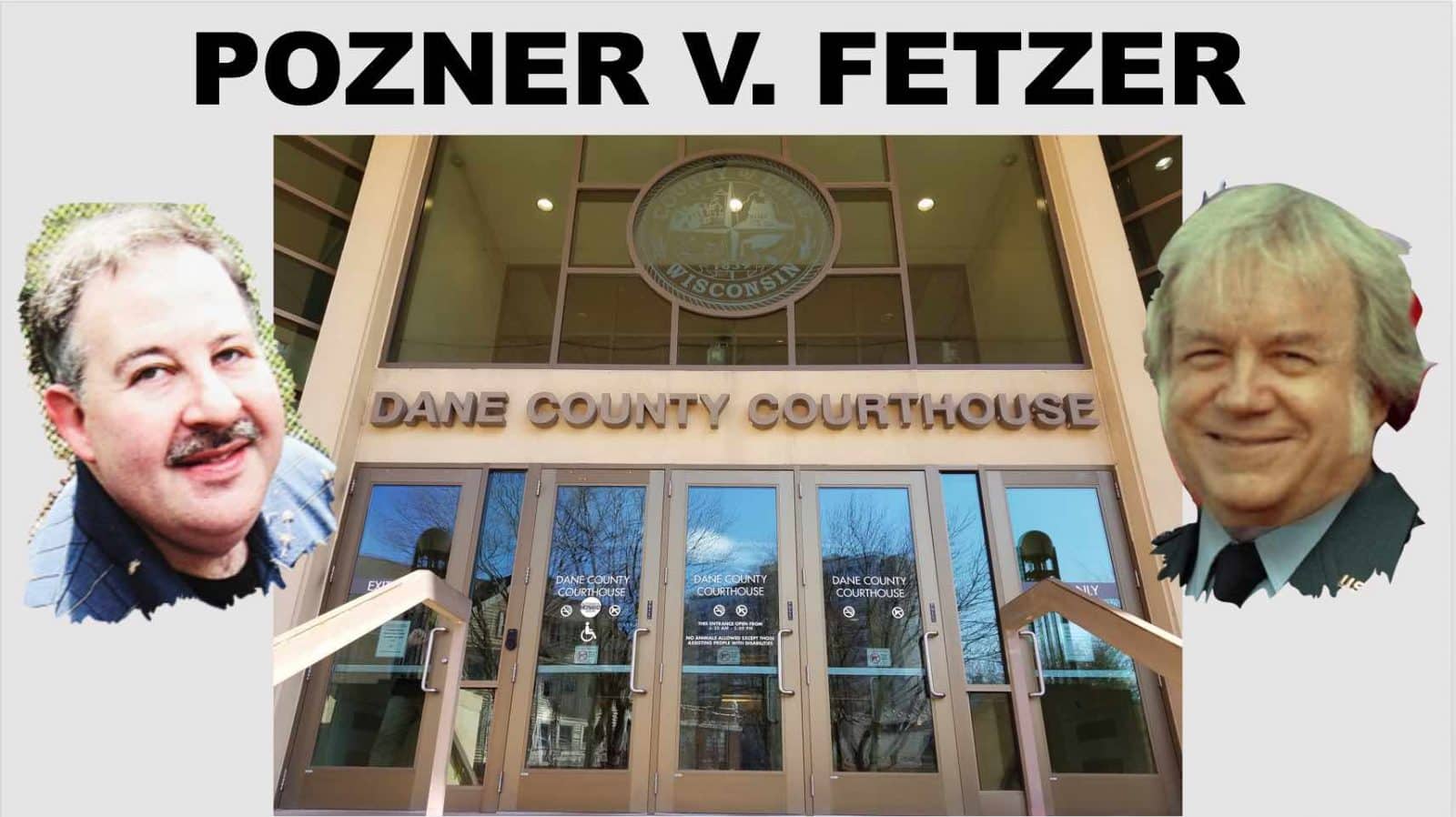 Jim Fetzer’s defense against Lenny Pozner’s defamation suit got interesting today, day two of the penalty phase of the trial. (Disclaimer: I have been friends with Jim since 2006, and though I don’t always agree with him, I respect his courage and sincerity. It was an honor to have lunch with him on this, the critical day of the penalty phase of his trial.)

Pozner won the first phase last June when the court determined that four of Fetzer’s statements alleging a fake death certificate for Noah Pozner were defamatory; then on September 13 Fetzer was found in contempt of court for sharing images of Pozner’s deposition. Fetzer argues that he shared the images, which the court had deemed confidential, as part of his legal defense research. Fetzer claims the images show that the Lenny Pozner in the deposition is not the same person depicted in at least some previous publicly circulated images of Lenny Pozner.

The penalty phase of the trial began Monday with opening arguments and a lengthy videotaped deposition of a forensic psychologist, who asserts that Pozner suffers from PTSD as a result of Fetzer’s four defamatory statements. The forensic psychologist, who was presumably hired by Pozner’s legal team, predictably supported Pozner’s narrative: After suffering the loss of his son Noah at Sandy Hook, Pozner says, he experienced PTSD for more than a year, only to have his recovery cut short, and his symptoms exacerbated, by his discovery that online Sandy Hook skeptics were claiming that the school shooting was a hoax in which nobody died. Since then, Pozner says, he has been waging an online battle against Sandy Hook skeptics (he calls them “hoaxers”) which has kept him mired in PTSD. Much or most of the suffering he has experienced, Pozner suggests, is the fault of Jim Fetzer, whom Pozner and his lawyers are casting as the kingpin and prime inspiration of the Sandy Hook skeptics’ movement.

Fetzer’s legal team questioned the “Fetzer caused my PTSD” claim. While acknowledging that Pozner would have suffered PTSD from the loss of his son in December 2012, they suggested that it was not entirely Fetzer’s fault that Pozner has been re-traumatizing himself by spending much of his time since 2014 combing the internet for material that he says traumatizes him and trying to get it removed. Fetzer’s team’s cross-examination of the psychologist pointed out that normally PTSD sufferers avoid stimuli that reawaken the trauma.

The afternoon session featured back-to-back testimony from Lenny Pozner and Jim Fetzer, both called to the stand and questioned by the plaintiff’s (Pozner’s) lawyers. In front of a huge, adorable Noah Pozner picture projected on the screen, Lenny Pozner recounted dropping off his son Noah at Sandy Hook Elementary School on December 14, 2012. He described seeing his son’s body at the funeral a few days later. He said that in 2014 he encountered the online claims of Sandy Hook skeptics and tried to engage with them in a cordial and transparent way, but soon began to feel harassed and increasingly upset at their claims that his son Noah had never existed. He said he has persistently tried to get such claims removed from the internet as a way of defending his son.

Below are reconstructions from my notes on Pozner’s testimony. The notes were cut short by a bailiff ordering me to shut down my laptop since I was not one of the two mainstream journalists who had been approved for electronic devices.

Noah was a twin to my youngest daughter. The last time I saw Noah would have been on the morning of December 14. I dropped my three kids off at the car line.

(At the funeral) his forehead was the only part that was not covered (due to injuries).

I became aware of Mr. Fetzer in mid-2014. (Asked if he had read Jim Fetzer’s edited book Nobody Died at Sandy Hook): No, I haven’t read the book, just the parts about me.

I was concerned someeone would do something…something bad.

(Asked why he thought Fetzer’s four defamatory statements had damaged his reputation): It causes people to believe I lied about my son’s death, that my son didn’t die….

I’m very cautious about what I reveal…I never know how people might react…people might accuse me of being this villain that Mr. Fetzer portrayed me to be.

(Asked whether he held Jim Fetzer responsible for the criminal acts of Lucy Richards, who left obscene, threatening messages on Pozner’s answering machine):

Lucy Richards was sentenced to prison for making death threats against me. (But why hold Fetzer responsible?)  It was the way she said what she said, and the way she talked about Noah, and about me…she accused me of faking my son’s death, hiding my son, that he’s not really dead.  Part of her sentence is she’s not supposed to read (Fetzer’s) website.

Jim Fetzer, called to the stand by the plaintiff’s lawyers as a hostile witness, was questioned about his responsibility for the alleged four defamatory statements, all of which involved claims that the copy of Noah Pozner’s death certificate circulated by Lenny Pozner in 2014 was inauthentic—claims Fetzer still argues were accurate. Fetzer said that he (and in some cases collaborators including co-authors, editors, and publishers) were indeed responsible for publishing those statements, which were not defamatory, but truthful. Dane County Circuit Judge Frank Remington immediately ordered the jury out of the room and admonished Fetzer that the court had already ruled that those statements were defamatory and that no further impugning the findings of the court would be tolerated. When the jury filed back into the courtroom, Judge Remington ordered them to ignore Fetzer’s statement.

Toward late afternoon the defense decided not to call two witnesses, Tony Mead and Kelley Watt, who had traveled from Florida to testify. Both sides offered closing arguments.

Though I missed the closing arguments (had to pick up my wife after a dental appointment) a friend and colleague who wishes to remain anonymous summarized them for me. What follows is based on what my source, who was present in the courtroom as a spectator, recounted afterward.

Pozner’s attorneys made broad emotional appeals, saying Pozner has experienced pain and suffering due to losing his son and then having the wounds re-opened by his battles with online Sandy Hook skeptics whose ideas, they claim, are derived from Fetzer’s book and web postings.

Fetzer’s attorneys argued more narrowly on two key issues. They asked why the psychologist expert witness who diagnosed Pozner with Fetzer-induced PTSD did not estimate any monetary damages from that PTSD. Nor, in fact, did Pozner or his legal team. No claims were made about the dollar value of any losses in earning ability Pozner may or may not have suffered. There was no claim whatsoever of any loss of income or medical bills.

Fetzer’s lawyers reminded the jury to set aside their personal feelings and emotions: They shouldn’t decide on the basis of whether they like or dislike Fetzer or agree or disagree with him. Damages are not supposed to be emotional or punitive, Fetzer’s attorneys said, but are only related to actual dollar-value loss (which had not been demonstrated).

The jury retired to consider their verdict. A few hours later, well into the evening, they ordered pizza. A few mainstream journalists, including a New York Times reporter, remained in the courtroom to await the verdict.

Whatever and whenever the verdict, they have just been scooped by VT. This is the first report of what went on in the courtroom, and when all the dust has settled it may remain the most fair and balanced.

As soon as the verdict is in I will post an update below.

SPECIAL NOTE: VT does NOT endorse Sandy Hook deniers.  VT believes in the First Amendment and academic freedom.  It is an open forum for all points of view thus VT offers others a platform to tell their stories, points of view, and opinions.

To ensure a well informed educated online citizen, we ask all readers to double and triple fact check all information herein. VT empathizes and stands with the victims of Sandy Hook and their families.