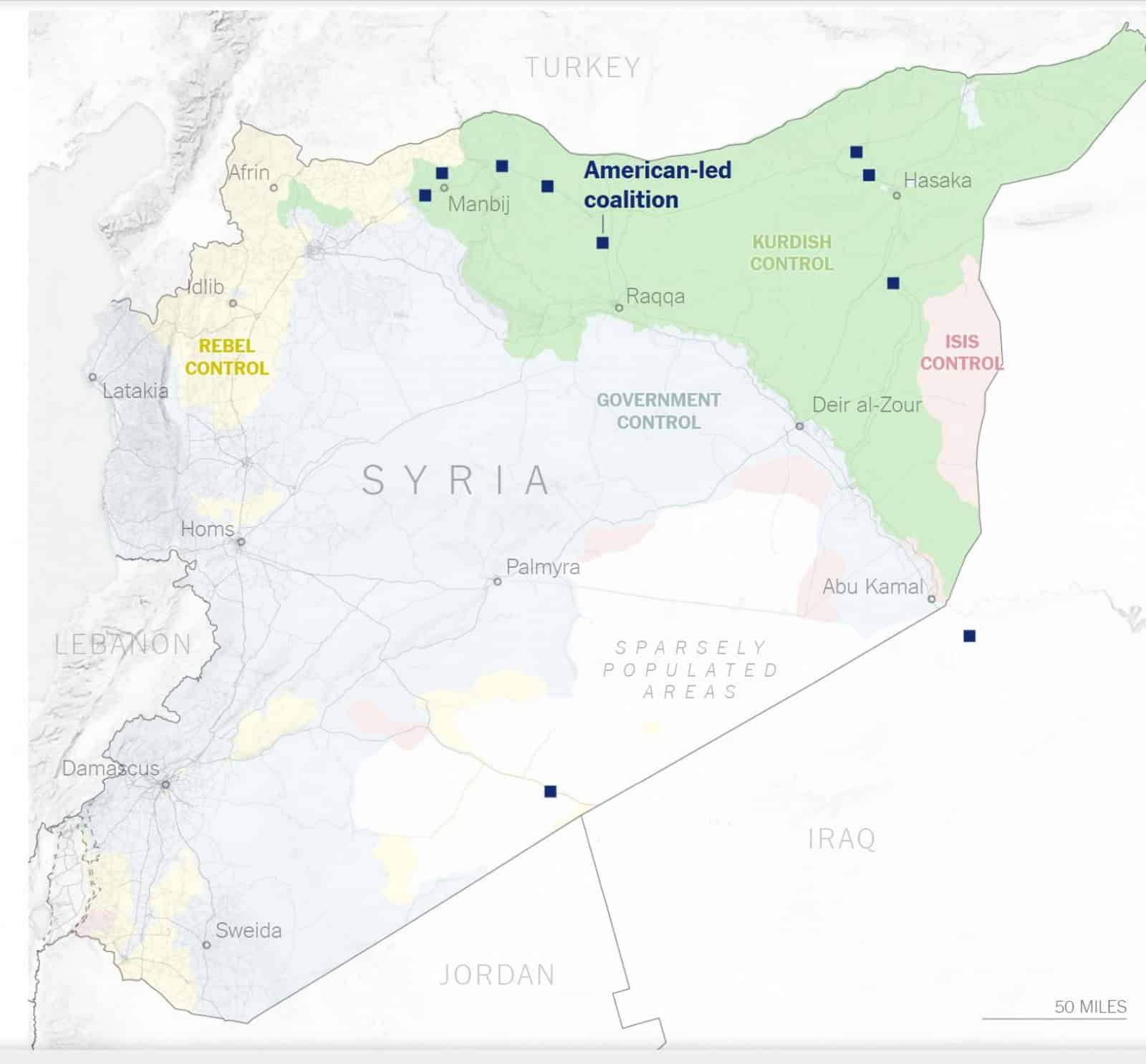 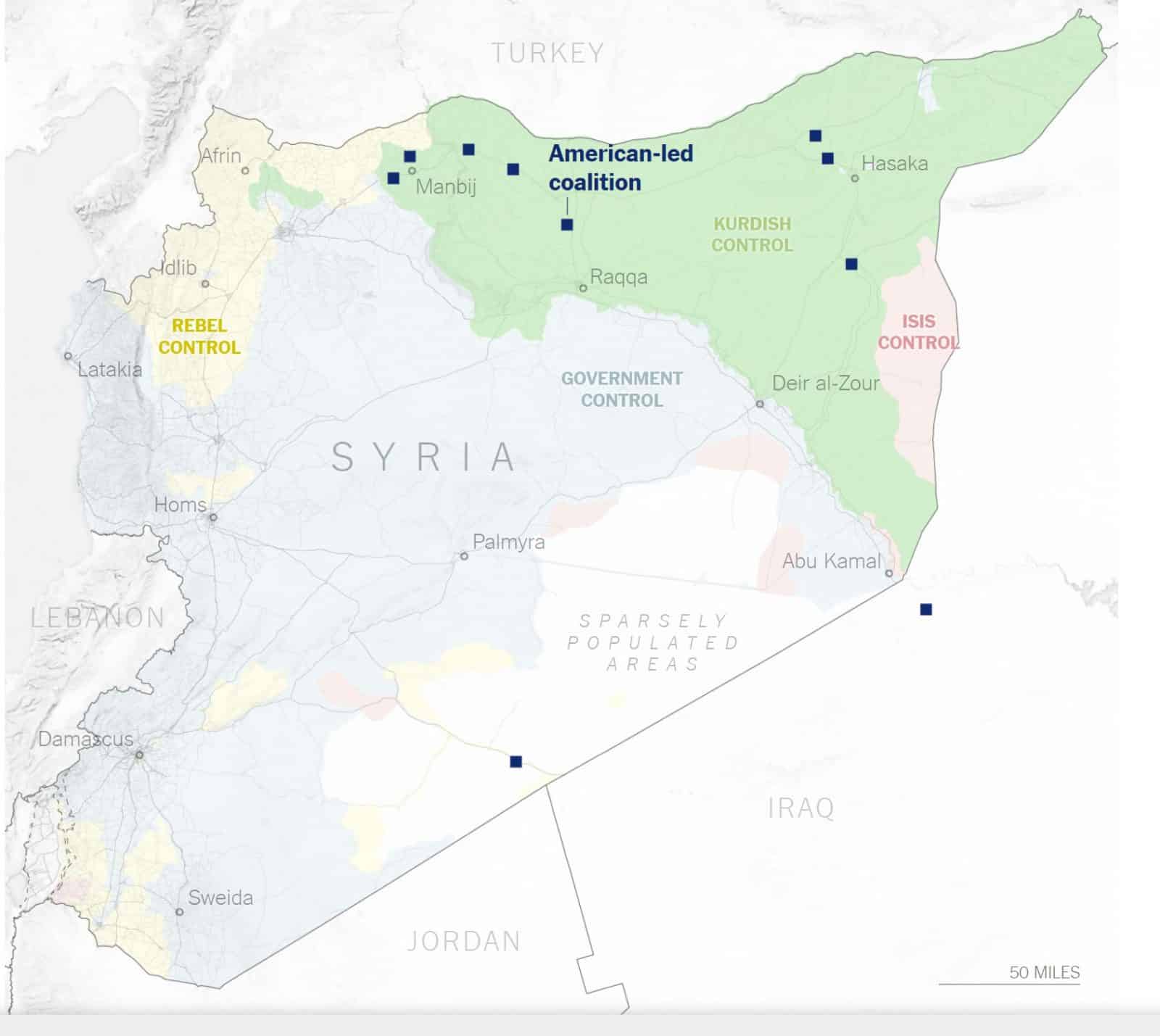 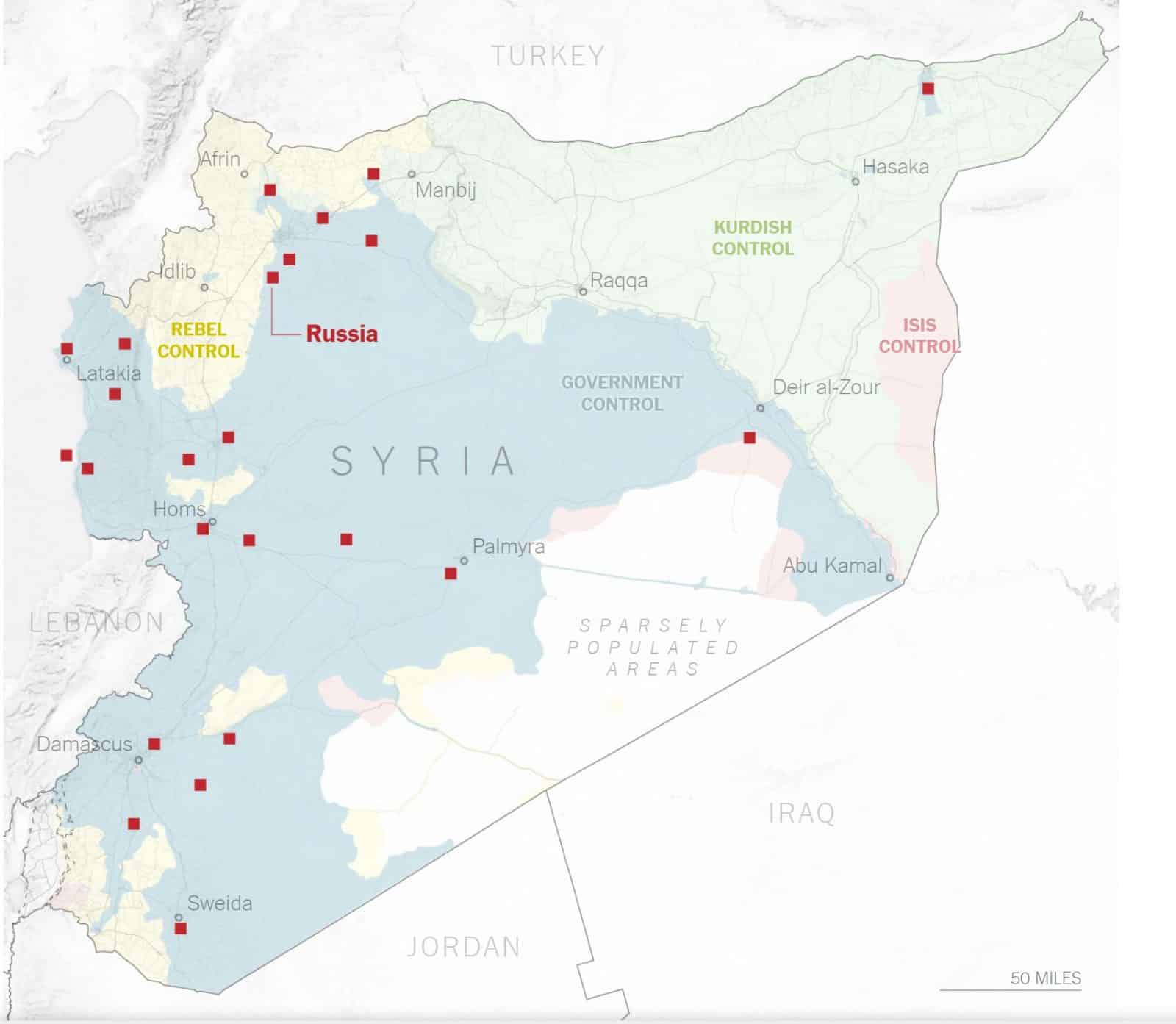 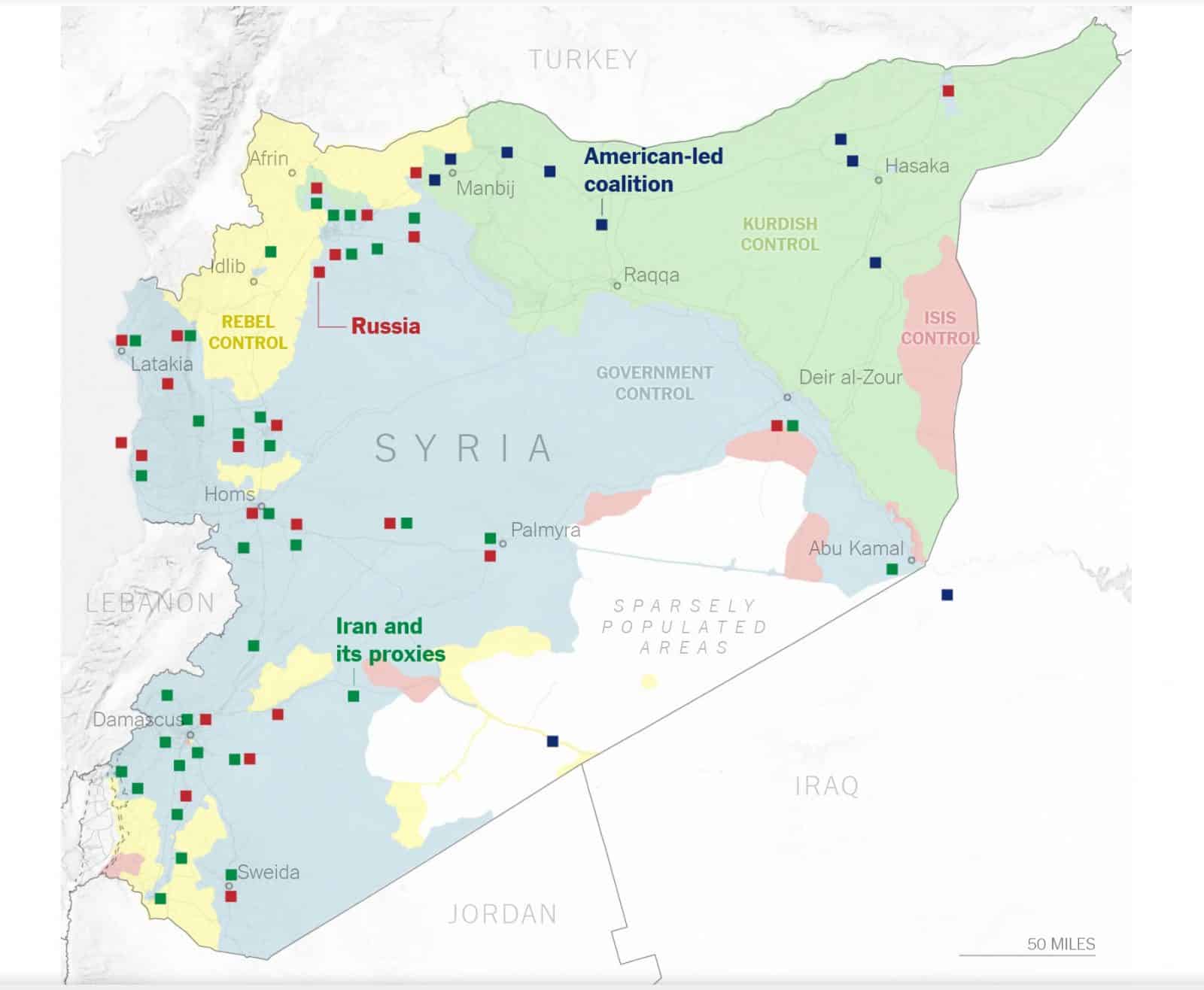 The maps above outline American, Russian, supposed Iranian and other bases in or near Syria.

As of this moment, Vice President Pence is heading for Turkey to meet with Erdogan, a day after Trump and congress imposed new sanctions on Turkey.

Tomorrow, Erdogan goes to Moscow to meet with Putin. 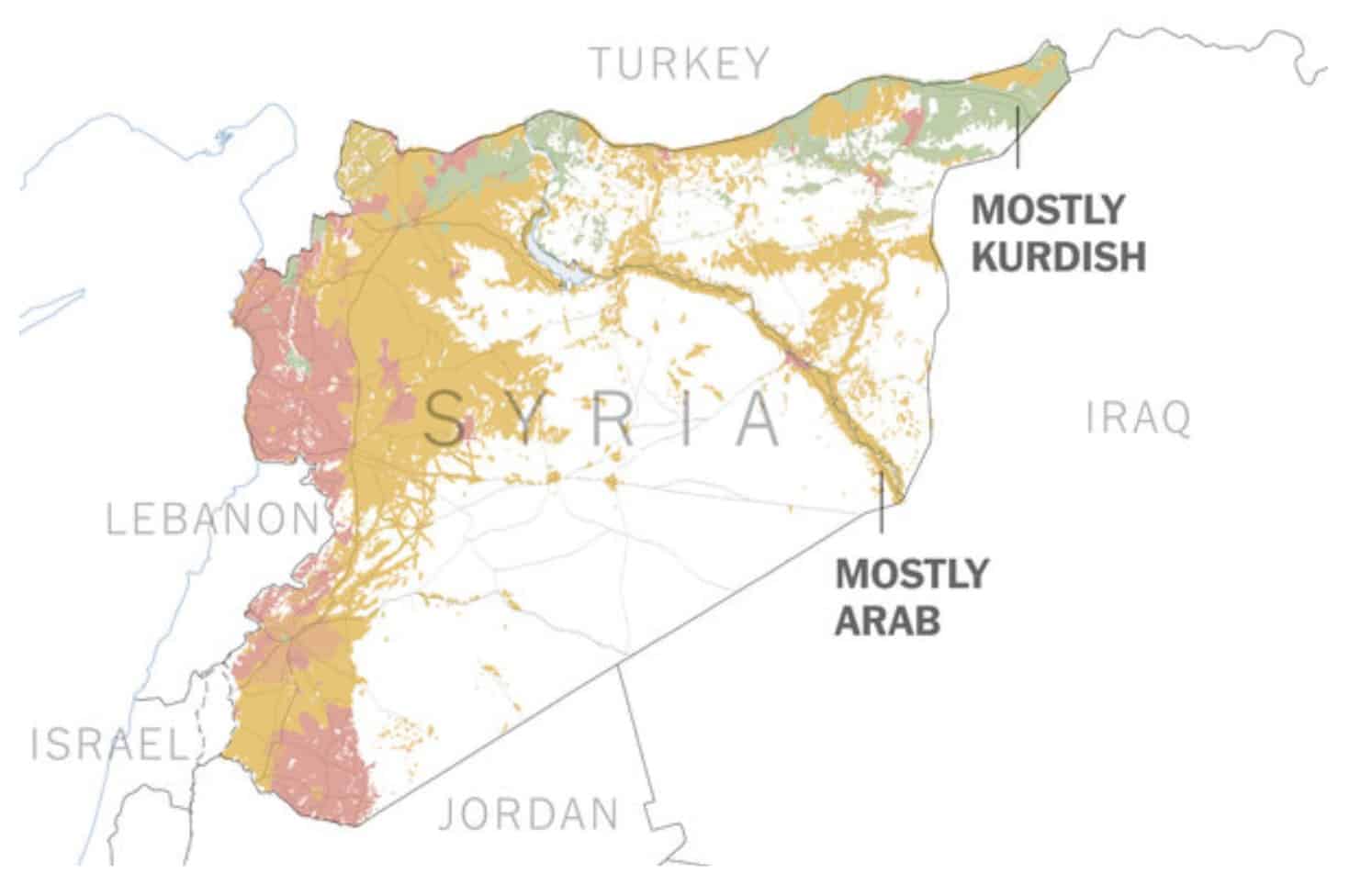 The US really entrenched itself across Syria, building airbases, pipelines, water treatment plants, ad hoc fortresses and, quite frankly, training camps for terrorists and bomb makers as well, using their logisitic/air capability to train and deploy jihadists from inside Syria to anywhere in the world, all done without a single member of the world press seeing anything.

The American bases use Hesco barriers, closely akin to old Roman fortifications such those that secured Hadrian’s Wall, between Britain and the dangerous Picts.  This bit of ‘window dressing’ is from the Daily Beast:

“The retreat of U.S. forces in Syria away from the Turkish invasion is having a downstream effect benefitting the so-called Islamic State. The American surveillance aircraft that had been watching ISIS are now watching their own troops.

Protecting the remaining U.S. forces in Syria is now the priority for the U.S. drones and manned aircraft overhead, according to a knowledgeable U.S. official who was not permitted to speak to reporters.

It’s a mission of necessity now that the remaining hundreds of American service members in Syria have come under attack from the army of their NATO ally and the Syrian Kurds whom the U.S. betrayed are now welcoming in Bashar al-Assad’s Russian-sponsored forces. Their presence has propelled the U.S. in northeastern Syria toward an endgame, since the U.S. betrayal of the Kurds removed the local partner the U.S. needed to wage war against ISIS members—who are now breaking free of their prisons.

The remaining hundreds of U.S. troops, for now, have pulled back to the southern at-Tanf base near the Iraqi and Jordanian borders. American reconnaissance and surveillance over Syria is now about protecting bivouacking U.S. forces, the official said, rather than watching what happens to the newly-freed ISIS fighters.

Among the reconnaissance assets remaining over Syria are Apache attack helicopters, a measurement of preparation for a withdrawal under fire. “

In Kobani, the US has a large airbase and huge tent complex that spreads for 3 square miles with hundreds of containers filled with intelligence and communications operational units.

The rest of the US bases spread across the country, part of Advanced Operational Base West, up to 1000 men, mostly in and around Raqqa, where America is alleged to train jihadists who had “formerly” been members of ISIS.

“US fighter jets and gunship helicopters were sent to scare off Turkish-backed militants in northern Syria after they came “very close” to US troops at Ain Issa, the Pentagon said. Washington has also sent a complaint to Ankara.

F-15 fighters and AH-64 Apache gunships were used in the “show of force” on Tuesday, an unnamed US official told reporters, after the militants “violated a standing agreement” not to threaten US troops. A formal complaint was lodged with the Turkish military through diplomatic channels, the official added.”

Though US troops have been withdrawing from Syria for the past week, some Special Forces operators were apparently still in the area of Ain Issa, located on the strategic M-4 highway about halfway between the Syrian-Turkish border and the former Islamic State (IS, formerly ISIS) “capital” of Raqqa.

Sitting on Syria’s oil fields, the US has another thousand troops, they say fewer but sources on the ground disagree, intended to shut down the border with Iraq at Bukamal.  That effort failed and the border is now open.

The NYT says American troops will return to Iraq, where they aren’t wanted or back to the American occupation zone north of Jordan, traveling by C17.

America will be leaving 3000 vehicles behind with the Kurds which will end up in Syrian, Russian or Turkish hands, ides of the fall of Saigon 1975.