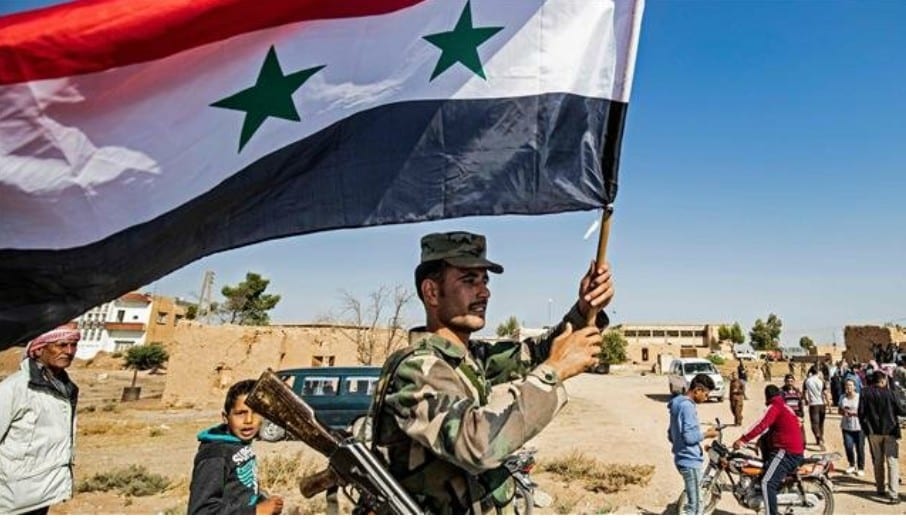 US President Donald Trump says the government of Syrian President Bashar al-Assad and other countries should be responsible for protecting the US-allied Kurds in northern Syria against a Turkish incursion, not the US which is “7,000 miles away” from Syria.

“Anyone who wants to assist Syria in protecting the Kurds is good with me, whether it is Russia, China, or Napoleon Bonaparte. I hope they all do great, we are 7,000 miles away!” he went on to say.

After defeating 100% of the ISIS Caliphate, I largely moved our troops out of Syria. Let Syria and Assad protect the Kurds and fight Turkey for their own land. I said to my Generals, why should we be fighting for Syria….

31K people are talking about this

Trump further raised the question why his country should protect part of Syria when President Assad is “our enemy.”

Some people want the United States to protect the 7,000 mile away Border of Syria, presided over by Bashar al-Assad, our enemy. At the same time, Syria and whoever they chose to help, wants naturally to protect the Kurds….

….I would much rather focus on our Southern Border which abuts and is part of the United States of America. And by the way, numbers are way down and the WALL is being built!

21.9K people are talking about this

Trump’s comments come as has been battered with criticism from Republicans and Democrats alike since the White House announced eight days ago that US forces would leave northern Syria, in a move that many call a “betrayal” to the US-allied Kurds in that region.

Following Trump’s decision to withdraw the US forces from northern Syria, Turkish forces last week moved into the Syrian territory, attacking the Kurdish forces that fought alongside the US against Daesh.

As a result, the Kurds struck a deal to join the Syrian army – President Assad’s forces – in attempting to push back the Turks.

In another tweet on Monday, Trump also released a statement to announce new sanctions against “current and former officials of the Government of Turkey and any persons contributing to Turkey’s destabilizing actions in northeast Syria.”

He said he will be soon issuing an “Executive Order” which authorizes the imposition of these sanctions.

He also vowed to increase steel tariffs back up to 50 percent, and immediately stop negotiations with respect to a $100 billion trade deal with Turkey. 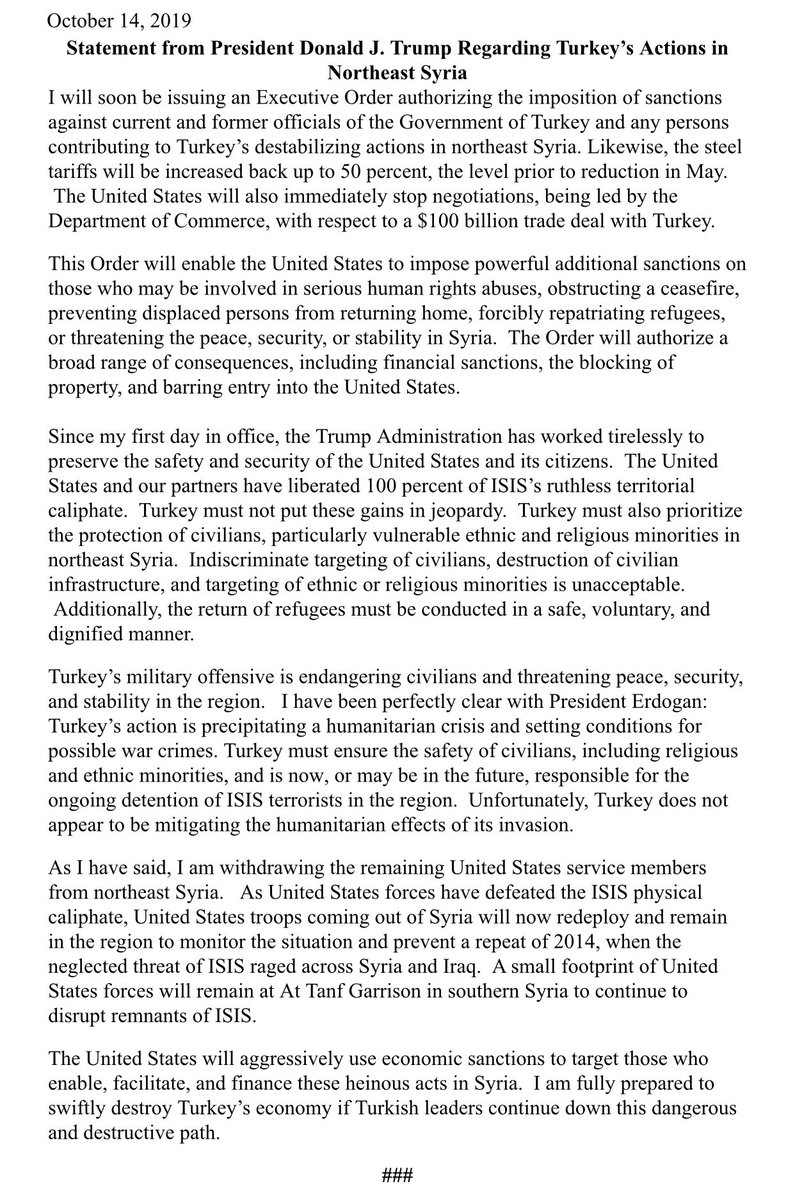 33.6K people are talking about this

The US treasury secretary later announced that it has slapped sanctions on Turkey’s defense, interior and energy ministers upon Trump’s request.

The UN secretary general said on Monday in a statement that the Turkish military offensive in Syria has displaced at least 160,000 civilians.

Antonio Guterres “is gravely concerned over the military developments in northeast Syria,” the statement said.

It said Guterres was urging “all parties to resolve their concerns through peaceful means,” adding that “civilians not taking part in hostilities must be protected at all times.”

He also expressed “serious concern” that the Turkish onslaught could lead to the “unintended release of individuals” associated with Daesh.

Some of the Kurdish forces guarding Daesh prisoners or their families have been pulled away to fight the Turks, raising fears that many Daesh terrorists might be able to escape.

A group of Daesh prisoners escape from a prison in northern Syria following Turkish mortar attacks nearby.

Guterres also demanded “sustained, unimpeded and safe humanitarian access to civilians in need” to allow the United Nations and its humanitarian partners to carry out aid work.

The UNICEF said that nearly 70,000 children have been displaced since hostilities in northeast Syria escalated nearly a week ago.

Turkish President Recep Tayyip Erdogan explained to his French counterpart Emmanuel Macron the aims of Turkey’s operation in northeastern Syria in a phone call, the Turkish presidency said on Monday.

Erdogan said the operation would contribute to regional and global peace and stability, the presidency said.

The talks came after the European Union countries agreed on Monday to limit arms exports to Turkey over its offensive, prompting condemnation from Ankara, even as they stopped short of a bloc-wide embargo against the NATO ally.