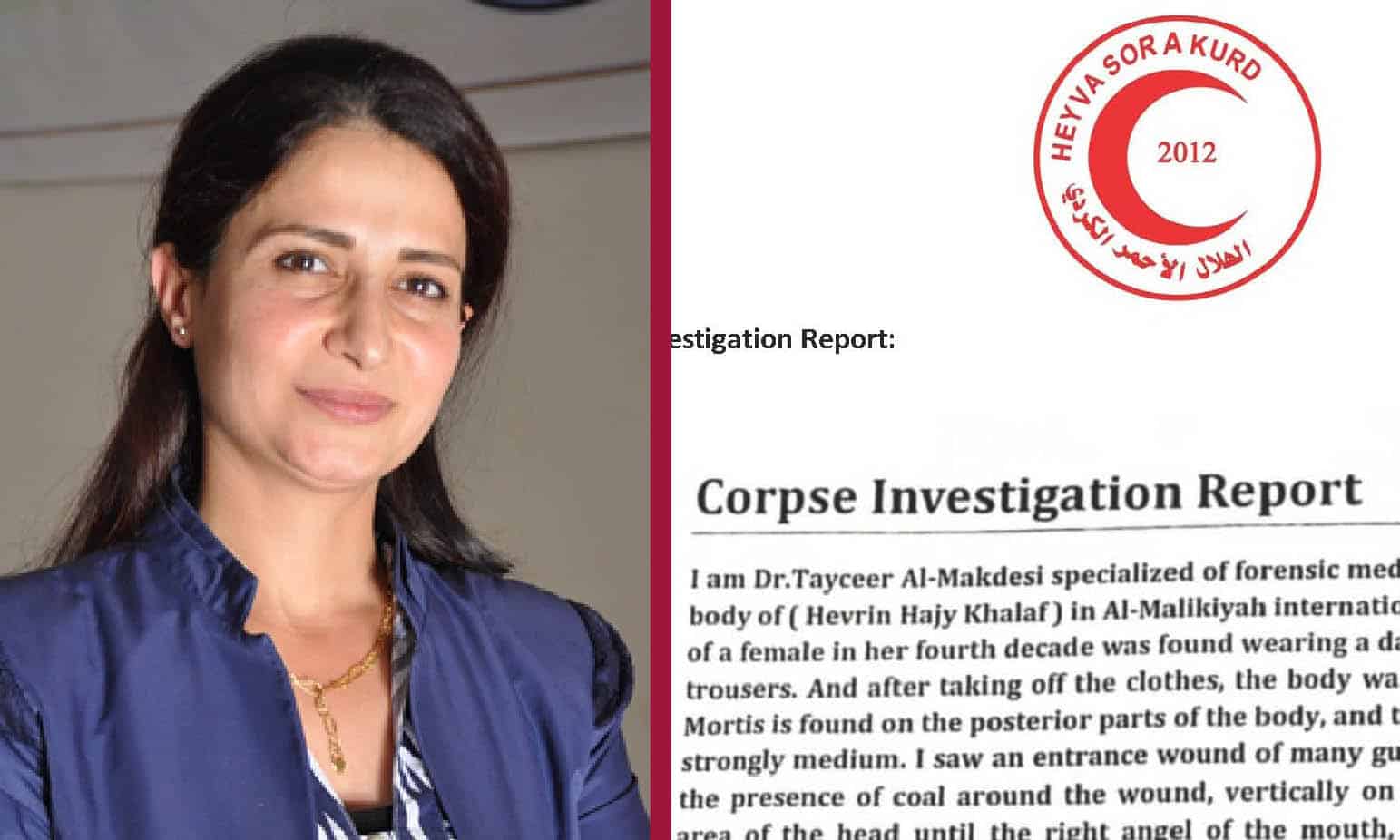 The Tukish.backed jIhadist Ahrar al-Sharqiya
slaughtered with bestial ferocity
the young Kurdish woman that worked
for the pacification of Royava in Syria

Hevrin Haly Khalaf (Xelef in Kurdish) was slaughtered with bestial ferocity by his executioners. The outcome of the autopsy conducted by Dr. Tayceer Al Makdesi, a specialist in Forensic Investigative Medicine, on the body of the 35-year-old human rights activist killed last Saturday in a real ambush on the M4 motorway, which connects Aleppo, Manbji, Hasaka and Qamishli, leaves no doubt: «Cause of death: severe cerebral hoemorrhage following gunshot wounds to the head».

In particular, her head was riddled with many gunshots by several killers of the jihadist faction Ahrar al-Sharqiya, the group close to Al Qaeda funded and armed by Turkey. This is confirmed by the numerous injuries detected during the autopsy conducted by the doctor at the Al Malikyah hospital where the body had been taken before the great funerals held Monday in Derek, in her village near the border with Iraq and not far from Qamishli .

The appraisal therefore confirms that the woman died from a barrage of bullets, some shot from close range as confirmed by the abrasions near the wounds, others from a greater distance, to the head but also to the back, and denies that it was the stoning, as claimed by the social media and brutally taken up by Italian national newspapers, to cause death.

Not only: in the autopsy report there is no reference to signs of the alleged sexual violence that the fake-news professionals shouted causing famous italian newspapers to revive the suspect without the slightest response.

The multiple bruises, the fractures and the areas of depression on the face confirm that it was also affected, may be with some stones or with the butt of the rifle, but this would have happened as a sign of contempt perhaps when she had already died for the numerous blows of ammunition with caliber compatible with semi-automatic smooth bore rifles.

«I saw an entrance wound of many gunshots 12×1,5 cm and the presence of coal around the wound, vertically on right upper temporale area of the head until the right angel of the mouth, with fractures in the temporal and malar bones and mandibular, and this area is depressed, and the angel of the mouth was wounded and left eye depressed and there is a traumatic bruise 5 cm diameter on the right superior occipital area an there is depressed fractur under it cm diameter – Dr Tayceer Al Makdesi has written in the report released by Kurdish Red Crescent and spread by Rojava Information Center – And there is an entrance wound of many gunshots 4 cm diameter on the superior occipital area of the head and the exit of brain matter from it».

In the lower occipital area of the head there are the exit wounds of the shots and the occipital bone is fractured. Furthermore « a circular gunshots wound 7 mm diameter on the back on the right side of the vertebral column at the level of the third vertebra without shot products around it, and there are on the right of the last wounded three similar entrance wounds far 5 cm from it». 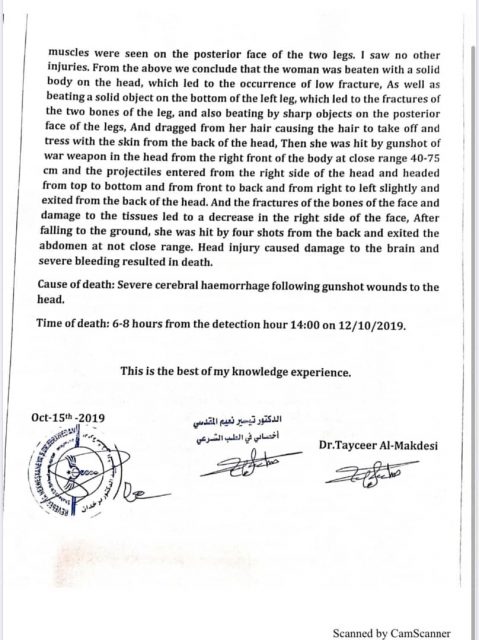 «From the above we conclude that the woman was beaten with a solid body on the head, which led to the occurence of low fracture» you can read on page 2 of the report. There is also a traumatic wound on the right leg and both lower limbs report some bone fractures.

Hevrin was dragged by the hair until she tore off part of it along with the scalp. But it was the shots that were fatal. «She was hit by gunshot of war weapon in the head from the right front of the body at close range 40-75 cm After falling to the ground she was hit by four shots from the back and exited the abdomen at not close range. Head injury caused damage to the brain and severe bleeding resulted in death».

On the morning of Saturday 12 October, the woman was returning from Hasaka where she had attended a meeting with other activists of her new party, of which she was also the general secretary, the “Future Syrian Party”, a group close to Curdi who proposed dialogue with Christians and Arabs of Sunni and Shiite confession for the pacification of Rojava and the protection of women’s rights.

Two objectives in open contrast with the politics of jihadists that proliferate due to the ethnic and religious rivalries by applying radical Islam in which women are considered inferior to men.

During the assault two Health Department employees, Azad Osman and Muhammed Ibrahim, were captured by the same group. Their destination is unknown but, as reported by the Rojava Information Center, a video shows the two health workers plus Ms. Khalaf’s bodyguards living in an Ahrar-al-Sharqiya prison.

The death of the young activist Hevrin struck the whole world arousing bewilderment both among the authorities and among the common people and further highlighting the ferocity of the jihadists that the Turkey of the Islamic dictator Recep Tayyp Erdogan uses as his mercenaries in the war in Syria.

A thread of hope for the tormented country, which is trying to defend itself from the aggression of the Turkish army of the last week with a strategic alliance between the Kurds of the SDF militias that control the autonomous region of Rojava to the east of the Euphrates and the Government of Syria supported by Russia, comes from the words of a last interview by Khalaf reported by the Red Crescent.

«The war in Syria has destroyed the places of childhood of millions of Syrians. In Ain Issa camp for displaced Syrians, we suggested that we give the displaced people every tent, a small tree, they plant in front of their tent. Take care of it. To be remembrance of them, after they left the camp towards their cities and homes. It will be a beautiful green memory, in a land that has grieved them and made them homeless». This was Hevrin the handsome, smiling, joyful and peaceful face of the Kurds and Rojava that the criminal Erdogan wants to destroy today.