[ Editor’s Note: It was nice to see someone do an update on the old Skripal case, even though the bad news is British authorities still have the case bottled up, an indication that many feel is they’re praying the public will lose interest.

So far there is no British public demand for an investigation of the investigation, something that screams out as being needed, as the government has demonstrated no earnest intention of even revealing what they do know, much less what they don’t know.

As James O’Neill covers below, even the frozen coroner’s inquiry as to how Dawn Sturgess died from what was claimed to be Russian-supplied Novichok, with the now usual no evidence of such, is completely ignored.

And as to why the Skripals have been kept under wraps, no official has attempted to give any reason whatsoever. Reasonable people might surmise that a major cover up is in play by those really responsible, and they have locked down letting any information out that might lead to their doorstep.

As Gordon does so love to say, its a really nasty world out there… Jim W. Dean ] 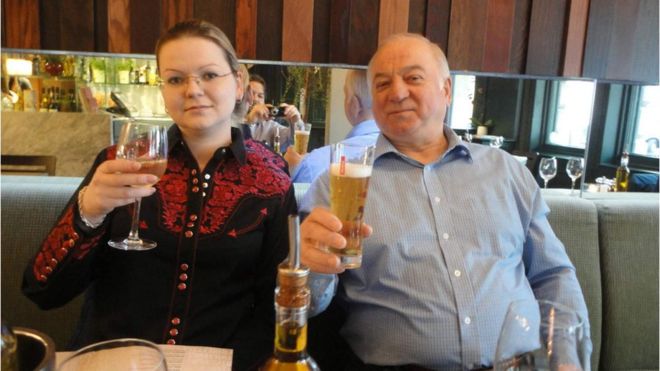 “The willing suspension of disbelief or the moment which constitutes poetic faith.” This has been defined as willingness to suspend one’s critical faculties and believe something surreal. Samuel Taylor Coleridge Biographic Literaric 1817.

The above quotation, now more than 200 years old, remains a perfect encapsulation of the ongoing farce (or tragedy) that is the case of Sergei and Yulia Skripal.

Mr Skripal was a Russian intelligence agent who betrayed his country. After serving part of his prison term he was released and moved to England where he lived in the small English city of Salisbury. His daughter Yulia, a Russian citizen and resident of Moscow, visited her father in Salisbury in March 2018.

Whilst she was there, father and daughter became seriously ill while in the centre of town. They were found on a park bench and taken to hospital. They both recovered, and apart from a brief statement by Yulia some weeks later, neither has been heard from since.

At the time of the incident, the then United Kingdom Prime Minister Therese May, made a series of unequivocal statements about the incident in which she blamed Russia as being the Government responsible for the Skripal’s illness. She further claimed that the agent used to disable the Skripals was a Russian developed agent she labeled “Novichok.”

The Russian sounding name and its reputed origins were evidence, May claimed, that the Russian government was responsible for what happened to the Skripals. The United Kingdom government imposed sanctions on Russia. In this they were joined by a number of other countries, including Australia.

As more information became available, the United Kingdom government’s version became less and less plausible. In fact, many of the allegations made by the United Kingdom government were downright absurd. It is sufficient to note here that the alleged agent used to protect the Skripals was a highly toxic substance where only minute quantities are required to cause an almost instant death.

The Skripals were said to be infected at Sergei’s home. There has never been a satisfactory explanation of how the pair were infected, yet managed to survive several hours, during which time they travelled, fed ducks in the park, ate a meal, and walked through the city centre. The official version was beyond absurd.

Facts however, did not seem to matter with a gullible media rushing to report the government’s absurdities, and a number of countries expelling Russian diplomats. The ordinary alleged Western principles of establishing guilt beyond a reasonable doubt after a proper legal process were simply abandoned in the anti-Russian hysteria that was generated.

Quite why the Russian government would wish to assassinate a former spy whom they had released and allowed to depart Russia some years previously was never explained. Even less plausible was any motive as to why Russia would seek to kill Yulia while visiting her father. She was, as far as one can tell, a blameless Russian citizen living in Moscow and planning her forthcoming marriage.

Logic, or the lack thereof, has never been regarded as an essential element in western propaganda.

That the real reason for the propaganda barrage against Russia may have been to disrupt the then forthcoming World Cup football finals in that country looks increasingly likely. The tournament was in fact a huge success, including for the tens of thousands of British fans who traveled to Russia for the event.

Shortly after the Skripals fell ill, the story was given extra legs by two British citizens falling ill from allegedly discovering a tainted (but unopened) bottle of perfume. That woman victim, Dawn Sturgess, later died. This gave rise to fresh anti-Russian hysteria in the British media and kept the story alive for a few more weeks.

Since then, there has been a serious lack of interest by the western media. That two Russians, one a British resident, the other a Russian resident, should disappear off the face of the planet was apparently not of interest.

The western press were equally silent on what was a blatant breach of international law, of the rights of the Russian government with regard to one of its citizens, or even the whereabouts or fate of two blameless (on the media’s own narrative) human beings.

It is known that the British government issued at least one “D” Notice, a device to prevent the media from reporting facts relating to a specific incident. No explanation has been given for that D Notice, although it is know that the identity of the named person, which was suppressed, was a friend of Sergei’s and an active British spy.

This association, and the details of this man’s activities, suggested that there was a broader agenda at play than an attempt to destroy the success of the World Cup finals. Again, the singularly incurious British media seem content to allow this blatant censorship of what is self evidently a material issue itself speaks volumes.

Under British law, where there is a suspicious death, a Coroner’s Court hearing must be held. The death of Dawn Sturgess clearly fell within that definition. The first such hearing was held on 19 July 2018 and immediately adjourned.

And the initial adjournment is not uncommon especially when Police inquiries are ongoing, as was the case here.

Earlier this month (October 2019) however, the Coroners Court issued a public statement in which is announced that the inquest into Dawn Sturgess’ death had been adjourned indefinitely.

This is an extraordinary development. It means in effect that the whole of the allegations made over the preceding 18 months, about the cause of death, the persons allegedly responsible, and all the political and propaganda barrage that went with it has now effectively being abandoned.

The Coroner’s Court cannot establish to the requisite standard how Ms Sturgess died, much less the identity of any individual or government that might be responsible.

As might be expected, the announcement by the British coroner has been met with a studied silence why the western media. The linking of Ms Sturgess’ death to the alleged activities of two Russian citizens seen in Salisbury on the day the Skripal’s became ill, and the lurid allegations about their alleged activities, have similarly collapsed.

The whole sorry saga has been disclosed as the complete nonsense that critics of the official original British version, and that of their unquestioning allies such as Australia, always said that it would.

The other feature that has been allowed to disappear down the memory hole is the whereabouts of the Skripals. They have been neither seen nor heard from in more than 15 months. The British media and their equivalents elsewhere remain singularly incurious about this feature.

It is proof yet again of the timeliness of Coleridge’s axiom about (in this case the media’s) singular lack of curiosity and willingness to suspend disbelief. Protestations about the “rule of law” are revealed yet again for the self-serving words that they are.