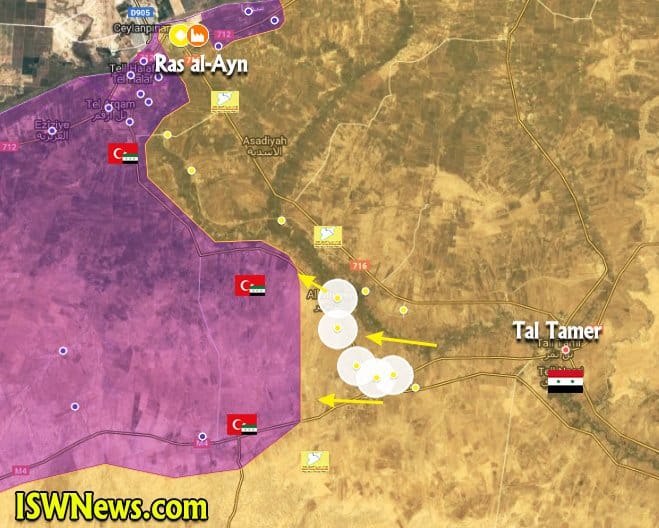 [ Editor’s Note: These combined Syrian units are attacking west to push the Turkish militias away from their M-4 highway blocking position, as the road needs to be cleared to move in more Syrian forces quickly for flanking attacks on the Turk positions north.

In the second report, I had missed yesterday that while the SDF had been flanked on both sides of Ras al-Ayn up on the border, they had not been driven out. The SDF is claiming 49 SNA kills today, 40 of them ambushed while they were looting houses, a favorite militia pastime, as they are criminals anyway.

That’s what you get for the $300 to $400 per month Erdogan has been paying them. When they shoot somebody, the first thing they do is go for their pocket money. If the SDF can stay close to the militias in town, the Turkish Air Force will not be able to bomb them.

And if these combined Syrian units can break one of the SNA columns, we might then see if the SAA will use its artillery on them retreating over open country… Jim W. Dean ]

Sources close to the Kurdish-led group said that the towns of al-Ahras, al-Rihaniyah and Manajir as well as the nearby grain silos were recaptured from the Turkish-backed National Syrian Army (NSA). The Syrian Arab News Army (SANA) confirmed that the SAA deployed troops inside the newly-recaptured villages.

At least 49 militants of the Turkish-backed National Syrian Army (NSA) were killed by the Syrian Democratic Forces (SDF) in the border town of Ras al-Ayn on October 16, according to opposition activists.

The militants were reportedly looting houses inside Ras al-Ayn, in northern al-Hasakah, when they were ambushed by fighters of the Kurdish-led SDF.

According to the activists, 40 of the killed  militants were members of the Sultan Murad Division while the rest were fighting in the ranks of the Hamza Division.

The NSA launched its attack on Ras al-Ayn eight days ago in the framework of Operation Peace Spring. However, the Turkish-backed coalition is yet to make any significant advance within the town.

Ras al-Ayn is one of the main targets of the Turkish Operation Peace Spring. The first phase of the operation is aimed at establishing a 120 km long, 30 km deep “safe-zone” between Ras al-Ayn and the town of Tell Abyad to the west.

To the west we also have report of combined SAA and SDF counter attacks further west on the M-4 Hwy near Ayn Issa …JD:

“Meanwhile, the so-called Syrian Observatory for Human Rights (SOHR) reported that Syrian army forces have deployed alongside Kurdish forces on the front line in northern Syria.

The Britain-based monitor reported on Wednesday that government troops and Kurdish militants were “fighting together” against Turkish-sponsored militants northeast of Ayn Issa.

The Observatory added that “violent clashes” are underway near the M4 highway, which runs from the western coastal city of Latakia to Saraqib city in Syria’s northwestern province of Idlib.”