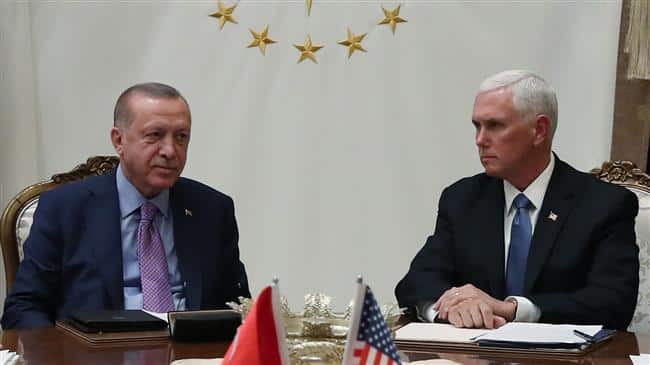 [ Editor’s Note: No modesty at all, Trump is claiming “millions of lives will be saved…due to his tough love. Left out of the picture is that – if the US had muscled the YPG Kurds, which it could have, to have moved away from the border – this could have been fixed a long time ago.

But the US did not want to give up its proxy Kurdish toy, using it to destabilize Turkey and Syria at the same time, a “two-fer”. Gosh, would Trump do that…with the NeoCons in tow? Sure they would. They did it.

Now Congress has egg on its face for their ganging up, as they wanted to keep their Kurdish toy on a string, too. They did nothing to resolve the issue and were actually undermining what was in the works.

Syria is a big winner, with the push now to put it back in charge of its borders, and probably some joint patrolling with others to make sure jihadis are not flowing back and forth which is bad for everybody’s security… Jim W. Dean ]

Turkey has agreed to end the military offensive in northern Syria after Kurdish fighters withdraw from a safe zone, US Vice President Mike Pence has said.

Ankara’s incursion “will be halted entirely on completion” of the withdrawal, Pence told reporters following more than five hours of negotiations between a US delegation and Turkish President Recep Tayyip Erdogan in Ankara on Thursday.

He said that Turkey will suspend its military operation for 120 hours to allow Kurdish YPG militants to pull out from the designated safe zone along the Turkish and Syrian border.

“Today the United States and Turkey have agreed to a ceasefire in Syria, in order to allow from YPG forces to withdraw from the safe zone for 120 hours,” Pence said.

“Great news out of Turkey,” Trump tweeted. “Millions of lives will be saved!”

“This deal could NEVER have been made 3 days ago. There needed to be some “tough” love in order to get it done. Great for everybody. Proud of all!” he added.

“This is a great day for civilization. I am proud of the United States for sticking by me in following a necessary, but somewhat unconventional, path. People have been trying to make this “Deal” for many years. Millions of lives will be saved. Congratulations to ALL!” he continued.

This is a great day for civilization. I am proud of the United States for sticking by me in following a necessary, but somewhat unconventional, path. People have been trying to make this “Deal” for many years. Millions of lives will be saved. Congratulations to ALL!

Turkey last week began pounding the positions of Kurdish fighters with jets and artillery and sent in troops to purge them from the area east of Euphrates.

The offensive came three days after Trump announced he would pull US troops from the region, effectively exposing its allied Kurdish militants to their archenemy, Turkey.

Trump’s move to withdraw troops from Syria was widely condemned by both Republican and Democratic Party lawmakers in Congress.

On Thursday, Syrian President Bashar al-Assad said his government will respond through all legitimate means available to the Turkish offensive.

During a meeting with visiting Iraqi National Security Advisor Falih al-Fayyadh in Damascus, Assad said foreign schemes in the Middle East region have been foiled throughout history, and the Turkish criminal aggression, launched by Erdogan’s administration, on Syria falls within such plots.