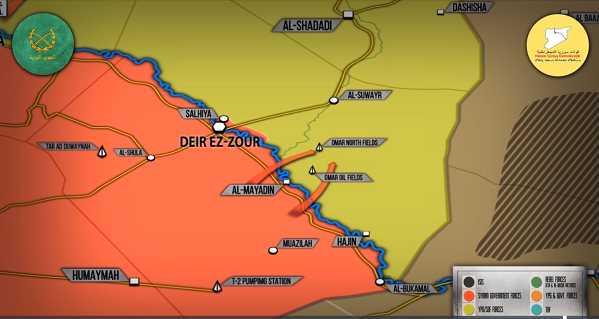 On October 16, units of the Syrian Army entered the city of Raqqah for the first time since 2014. The Kurdish-led Syrian Democratic Forces (SDF) has controlled the city since 2017, when they with help from the United States seized it from ISIS. The Syrian Army reportedly established several observation posts in the area and continued deployment within the SDF-held area.

According to pro-government sources, government troops are also preparing to enter the Omar oil fields. A day earlier, on October 15, Syrian troops and Russian Military Police units started patrolling the contact line between Turkish-backed forces and the SDF near Manbij.

On October 16, US-led coalition forces withdrew from the Kharab Ashk military base where dozens of US and French troops had been deployed. US-led forces burned the base in order to destroy equipment that they were not able to evacuate.

The Turkish Army and Turkish-backed militants are developing their offensive on SDF positions. They captured thirteen villages west of Tell Abyad and made another attempt to secure Ras al-Ayn. According to pro-SDF sources, 49 Turkish-backed militants were killed in an SDF counter-attack in the town. SDF units employed US-supplied military equipment. Pro-Turkish militants captured a Humvee armored vehicle near the town.

There are also reports that the SDF and the Syrian Army jointly recaptured the villages of al-Ahras, al-Rihaniyah and Manajir from Turkish-led forces south of Ras al-Ayn.

Nonetheless, this was a tactical development involving Turkish proxies only. It is not likely that government forces and the SDF will carry out large-scale joint operations attacking positions of the Turkish Army. The main reason is that such an attack may lead to a large-scale escalation in the region and even a limited open conflict between Syria and Turkey.