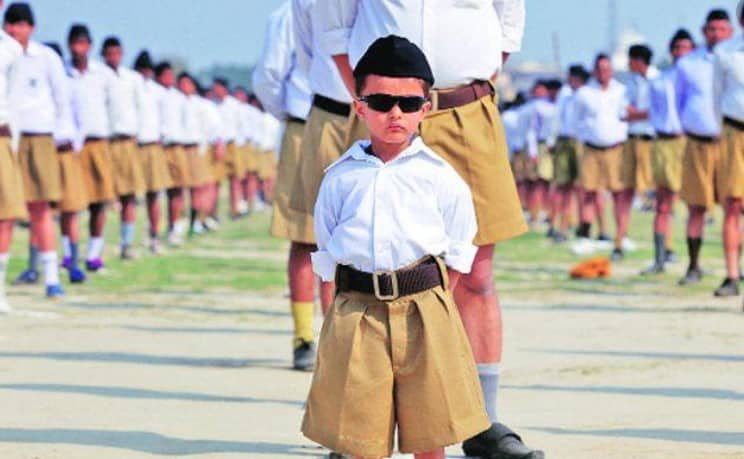 Unlike major religions, Hindu religion cannot be defined in a single sense. It has evolved around regions, tribes and castes in diverse forms of worship from the Southern tip of India to Hindukush, Indonesia and even the pacific islands. Hindu scholars find Hindu roots in all forms of ancient religions. Even today it continues to absorb and evolve. A case in point is the ‘Hussaini Hindus of Sindh Pakistan’; who follow some Islamic traditions.

According to Prof Bani Prasad Sil: –

“Hindu political thought has a spirit, a milieu, an atmosphere of its own as different from their western counter parts as Hindu personality, temperament and outlook are different from what one finds in Western Europe. Hindu thought does not fall under any of the accepted categories of western speculation. It stands by itself”.

Unless we understand the many streams of Hinduism, it will be difficult to read Indian especially RSS intentions for futures.

The earliest prehistoric religion in India that may have left traces in Hinduism dates to a period of 30,000 BC or older. Hindu Vedes, Simitris and written texts suggest this era to be glorious and highly advanced. To understand the Saffron wave, comprehension of the Pre-vedic Religion and history is important.

Though scholars disagree on timelines, the composition of the Vedic literature began in the 2000 BC. The oldest of these Vedic texts is the Rigveda, composed between 1500-1200 BC.

Initially, the Brahmanical tradition had questioned the meaning and efficacy of Vedic rituals, then internalised and variously reinterpreted the Vedic rituals as ethical concepts.

Iron Age (1500–200 BC) and Second Urbanisation (500–200 BC).  Increasing urbanisation of India between 800 and 400 BCE, contributed to the rise of new ideas which challenged the orthodox Brahmanism. In Sramana culture which was Indo-European, Kashtriyas were placed higher than Brahmins. Gangetic plains, which gave rise to Jainism and Buddhism, incorporated a culture which was different form the Brahmanical orthodoxy.

Pre-classical Hinduism ( 200 BC-300 BC). From about 500 BC through about 300 CE, the Vedic-Brahmanic synthesis continued. Classical Hindu and Sramanic (particularly Buddhist) ideas spread within Indian subcontinent, as well outside India such as in Central Asia, and the parts of Southeast Asia

(coasts of Indonesia and peninsular Thailand). Brahmans incorporated Buddhist influences. The major Sanskrit epics, Ramayana and Mahabharata, were compiled. The Bhagavad Gita was composed in this period. The foundational texts of several schools of Hindu philosophy were formally written. Arthashastra deals with the political mind and Mahabharata with the militant mind.

“Golden Age” (Gupta Empire, Ashoka and Ghandara) ( 320–650 BC). During the Gupta period, the first stone and cave Hindu temples dedicated to Hindu deities were built, some of which have survived into the modern era. Numerous monasteries and universities were also built during the Gupta dynasty era, which supported Vedic and non-Vedic studies. It was a big Hindu-Buddhist Kingdom spreading from Hindukush to Pataliputra but excluding South India. During Ashoka’s reign Hinduism and Buddhism spread to all India except Southern tip and Sri Lanka. Taxila was capital.

Note that these with Hindu-Buddist Empires

First Mosque at Banbore (Karachi) was constructed within 100 AH. THE HUSSAINI Brahmins is a community that has an intertwined link with Hinduism and Islam. It is said that their ancestor, Rahab Sidh Dutt had sacrificed his seven sons for Imam Hussain at Karbala in 61 AH. The community came to be known as Hussaini Brahmins. They are now spread across Sindh in Pakistan, Maharashtra, Rajasthan, Delhi and other parts of India, Pakistan and Arabia. They gave Muslims safety in Sindh after the tragedy of Karbala. This dynasty ruled in Afghanistan for 120 years, from 830 AD to 950 AD. They are Pakistan’s assets.

I will not go into details of Muslim rule over India as it is already well known.

Early modern period (1526 AD–1858 AD). The British Raj, started a Hindu Renaissance in the 19th century, which profoundly changed the understanding of Hinduism in both India and the west. Western researchers created the false notion of “Hinduism” as a unified body of religious praxis and the popular picture of ‘mystical India’. Yoga, Ayurvedic health and Tantric sexuality were particularly attractive.

Hindutva and Rashtriya Swayamsevak Sangh (1920 to date). In the 20th century, Hinduism also gained prominence as a political force and a source for Hindu national identity in India. Both evolved and grew together.

Vinayak Damodar Savarkar was a pragmatic practitioner of Hindu Philosophy. As  response to the Pan Islamism and Muslim League, Savarkar joined the Hindu Mahasabha and popularized the term Hindutva (Hinduness), previously coined by Chandranath Basu, to create a collective “Hindu” identity as an essence of Bharat.

The three essentials of Hindutva in Savarkar’s definition were the common nation (rashtra), common race (jati), and common culture or civilisation (sanskriti). Savarkar used the words “Hindu” and “Sindhu” interchangeably. These laid foundation of Hindutva, as geographic, cultural and ethnic concepts. His elaboration of Hindutva included all Indian religions, i.e. Hinduism, Buddhism, Jainism and Sikhism.

Savarkar believed that the Indian subcontinent, which included the area south of the Himalayas and the Hindu Kush, or “Akhand Bharat” is the homeland of the Hindus. He considered as Hindus those who consider India to be their motherland, fatherland and holy land, hence describing it purely in cultural terms.

Hindutva is not a static and monolithic concept. Like the Hindu religion it keeps evolving and adapting to times. According to Dr. Arvind Sharma, its context, text and subtext changed over the past century. To understand Hindutva, it is important to understand the prevailing environments that made its morphing reactionary. Colonialism added a sense of “ethnicity” to the original “Hinduness” meaning of Hindutva.

Its early formulation incorporated the racism and nationalism concepts prevalent in Europe during the first half of the 20th-century, and  was in part rationalised as a result of “shared blood and race”.

In the post-independence period, the concept suffered from ambiguity and its understanding aligned on “two different axes” – one of religion versus culture, another of nation versus state. In general, the Hindutva thought among many Indians has tried to align itself with the culture and nation axes.

Savarkar praised the growth of Italy and Germany during the Fascist and Nazi rule; he believed that Nazism and Fascism were “the most congenial tonics, their health demanded.” He often compared Germany’s German majority and Jewish minority as analogous to India’s Hindu majority and Muslim minority. In 1938, he wrote, “if we Hindus in India grow stronger in time, these Moslem friends of the League type will have to play the part of German Jews”.

The movement grew with the formulation and development of the Hindutva ideology and the establishment of Rashtriya Swayamsevak Sangh (RSS) in 1925; and the entry, and later success, of RSS offshoots Jana Sangha and Bharatiya Janata Party (BJP) in electoral politics.

RSS was founded in 1925 by Dr. Keshav Baliram Hedgewar at Nagpur. As a follower of Savarkar, he realised that revolutionary activities alone were not enough to overthrow the British.

The RSS is the progenitor and leader of a large body of organisations called the Sangh Parivar which have presence in all facets of the Indian society. RSS is the world’s largest voluntary organisation. Sang Parivar comprises: –

After his release from the colonial prison, Savarkar joined and became the president of Akhil Bharatiya Hindu Mahasabha in 1937. In 1944 Syama Prasad Mukherjee, served as its president and joined the Jawaharlal Nehru Cabinet after independence. Later, he resigned from the party and founded a new political party in collaboration with the RSS. He understood Hinduism as a nationality rather than a community but, realising that this is not the common understanding of the term Hindu, he chose Bharatiya instead of Hindu to name the new party, which came to be called the Bharatiya Jana Sangh in 1951. In 1980 Jana Sangh converted to BJP.

After the 1998 general election, the BJP-led coalition known as the National Democratic Alliance (NDA) under Prime Minister Atal Bihari Vajpayee formed a government that lasted for a year. Following fresh elections, the NDA government, again headed by Vajpayee, lasted for a full term in office.

In the 2004 general election, the NDA suffered an unexpected defeat, and for the next ten years the BJP was the principal opposition party. Long time Gujarat Chief Minister Narendra Damodar Das Modi (an RSS member) led it to victory in the 2014 general election. In 2018, BJP won a landslide victory.

The Changing Sub Text of BJP

For a rising party like BJP, the 2004 defeat was unexpected. Meanwhile the popularity of Chief Minister Modi in Gujarat was growing. RSS and the BJP had been party to the Gujarat violence that erupted after the Godhra train burning. Christian groups accused the RSS and its close affiliates of participation in the 2008 religious violence in Odisha.

True to traditions of Hinduism and Hindutva, The Sang Parivars recruit for 2014 election was Modi. He is a sworn RSS member and believes in ethnic, racial and religious cleansing. His RSS and other affiliates are noted for their violence against Muslims, Christians and Dalits.

BJP is no more a party that Vajpayee headed. The new philosophy of BJP finds roots in the India of antiquity.

“We beheld in the sky what appeared to us to be a mass of scarlet cloud resembling the fierce flames of a blazing fire. From that mass many blazing missiles flashed, and tremendous roars, like the noise of a thousand drums beaten at once. And from it fell many weapons winged with gold and thousands of thunderbolts, with loud explosions, and many hundreds of fiery wheel.”

Narendra Damodardas Modi the Prime Minster believes that such an India kingdom existed in antiquity and that he is the reincarnation of Arjuna in Baghavad Gita, flying a massive Vimana with thousands of airborne chariots carrying out inter stellar journeys. He believes that these flying objects rained hell with nuclear devices Mohenjo Daro and Harappa. He is convinced that he is the chosen one by gods to lead the charge. The land he must hail with fire is Pakistan to re-carve an Akhand Bharat. He and his Parivar are determined to follow Rigveda, Mahabharata, Baghavad Gita and Ramayana.

Over the years, the representation of Jat and other Hindus in the defence services has increased leading to rebirth of the Kashtriya tradition and the emergence of a militant Hindu core. Already their vigilantes dominate streets and the establishment. They nuclearized India; call for unification of Kashmir and ultimate annexation of Pakistan.

The incidents with strong religious tones are as follows.