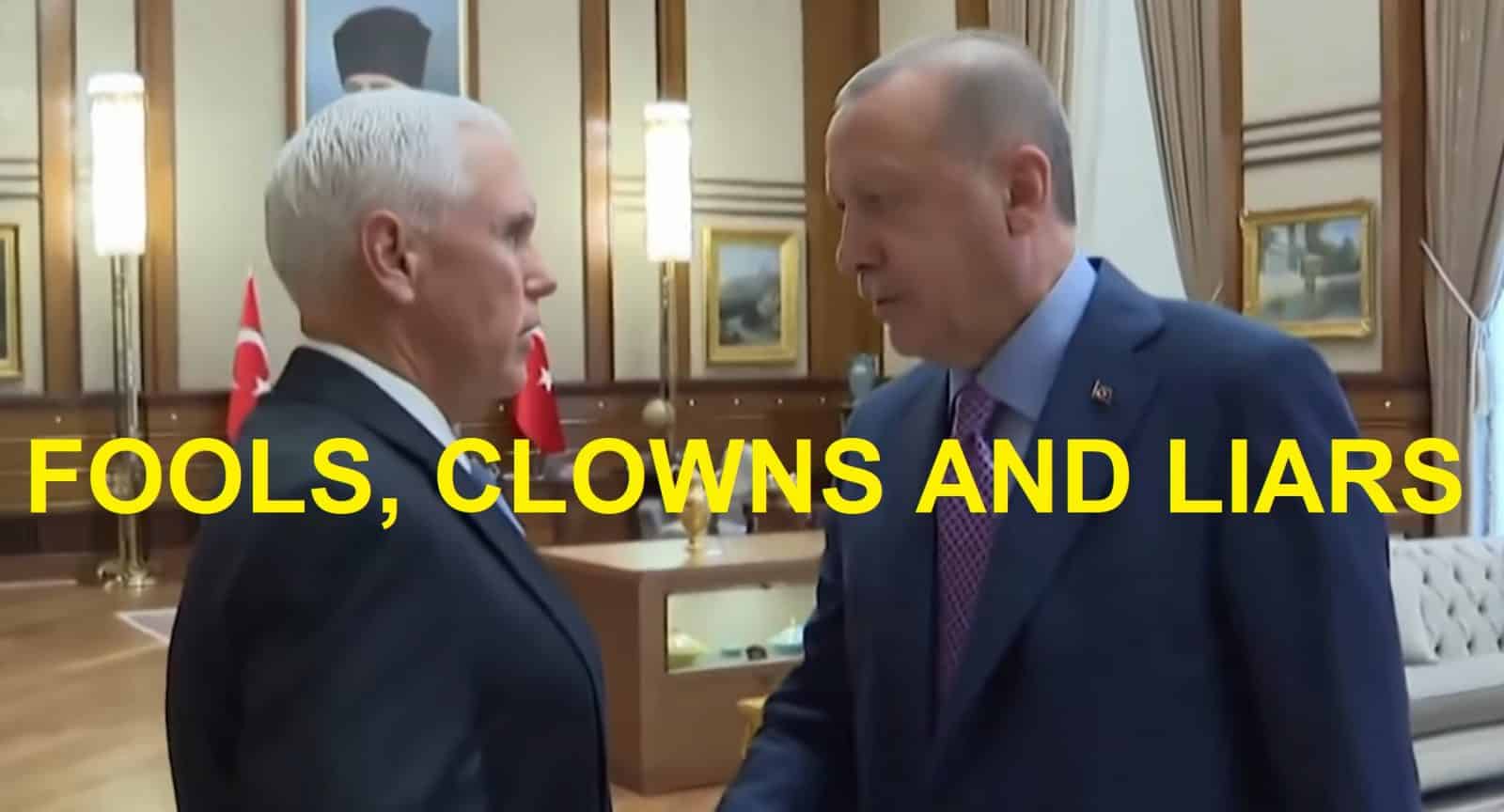 A few days ago, Russia, Syria and the Kurdish Defense Forces came to an agreement to cooperate against Turkey. At a later date, Syria’s Kurds are to seek the best political deal they can get from Damascus.

The situation is this, Turkey is not doing so well on the battlefield, their fake army of mercenaries and criminals are being slaughtered by extremely well-armed and well-trained Kurds (thanks USA!), while American troops fled Northern Syria leaving behind radios, dirty laundry, house pets and their dignity and honor.

Two weeks into the fight, after telling the US that Pence can go to hell, Erdogan and Pence agree to allow the Kurds (and Syrian Arab Army) to withdraw so Turkey can move out its wounded, bury its dead, and tow away 3 dozen burned out hulks that used to be German-built Leopard tanks destroyed by latest version American TOW missiles, which the Kurds have by the thousands.

Where is Turkey’s air force? Well, with Syria moving forward, BUK2 and Pantsir S1 units are deploying with the Syrian Arab Army with some forward deployment of longer range S300 systems.

This, of course, leaves Damascus vulnerable to Israeli attack were it not for an agreement between Russia and Israel which is being tested as we speak.

Where the farce is can be explained easily. The US ran away and now has no “standing”, as the US has no troops in the field. Syria has control of US areas, and Russians have moved forward to the line of contact in several areas containing Turkish advance where other forces are not yet deployed.

In the last 72 hours, Syria now controls 20% more territory than before, the kind of “big win” only seen with Hitler’s blitzkrieg. Syria has its oil back, much of it, its water supplies and its agricultural centers, all lost to American and Kurdish control.

Syria may not be stronger today, but a Syrian army backed by Kurds with a load is stronger still.

Cover for Syrian Army movements against Turkey are Iranian forces.

This is where things get difficult. Iran is close to Turkey, a major economic partner.

Russia is close to Turkey, a major economic partner.

Then we have the agreement itself, between the US, who has nobody left on the ground, and Turkey, who isn’t doing so well, a nation whose currency is worthless and whose economy, even without Donald Trump, is in freefall.

Pence has agreed to award much of Northern Syria to Turkey, setting up a safe zone guaranteed by US troops that no longer exist and in consultation with no one actively fighting on the field.

Erdogan says he is willing to let the Kurds withdraw, while Kurds are doing quite the opposite, moving forward to confront Turkey, aided by the Syrian Army which has an air force and extremely powerful mobile air defenses as well.

OK, in a day, two days, Erdogan will meet with Putin and all this will be straightened out, or everyone hopes. Yet, Russia’s fake “zio-press,” and we mean RT and Sputnik, are spinning this as a great victory by Turkey against Russian-backed Syria?

What we do know is that Putin and Lavrov will never allow a Turkish “safe zone” guaranteed by non-existent US forces inside Syria. It will NEVER happen. The Erdogan-Pence Treaty of 2019 will go down in history with the invention of brown toilet paper.