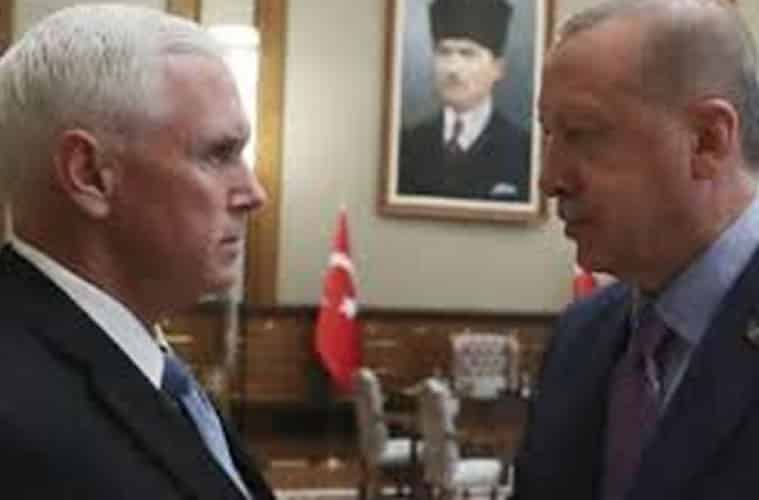 The Kurdish military Sdf accept truce
with Turkey’s withdrawal only.
The Us peace-mission pretends
a big safe-zone stolen from Rojava

Good news comes from Syria but it’s just another lie. The extremist Islamic dictator Recep Tayyip Erdogan wanted to make sense of the journey of the American vice president Mike Pence and agreed to a 120-hour truce.

First of all it must be said that he did it out of fear. The resistance of the Kurdish SDF militias in the easiest of goals, the city of Rais Al Ain, not far from the Turkish border, was stronger than expected.

And according to Kurdish sources the Ankara army would have used white phosphorus ammunitions, which burn the skin with lethal burns on anyone who comes into contact with dust, to terrorize enemies and above all the population that is crying at least fifty deaths.

But Erdogan’s cease-fire so far in Syria has only been a strategic solution to give advantage to his allied bastards: the al-Qaeda jihadists who are now reinforced by surviving ISIS commanders as mentioned in various Gospa News reports.

Not only. The aviation of Russia and Syria took control of the airspace over Rojava, the Syrian North East region, thus preventing Turkish jets from covering the advance of the armed forces.

The first truce signed by Ankara with Russia and Iran dates back to 17 September 2018 for the province of Idlib. It was never respected. Because the jihadists of various groups, friends and financed by Turkey, have continued to attack and bomb and the Ankara government that, according to the agreements, was supposed to bring out terrorist Islamic extremists from Syria never did.

We arrive today when the US president Donald Trump collects a total rejection from the Chamber of Congress for having withdrawn the Marines from the border between Turkey and Syria, thus opening the door for the Turkish invasion of the Peace Spring operation.

The Pence mission in Ankara makes people who understand a minimum of geopolitics laugh. It seems a diplomatic attempt for cleaning his soul forward many Christians murdered.

“The United States will work alongside Turkey, and with nations around the world to ensure that peace and stability are the order of the day in this safe area on the border between Syria and Turkey,” stressed Pence, who also illustrated some details: Turkey – he explained – will obtain a security zone agreed with the US about 32 kilometers beyond its Syrian border.

The Turkish Foreign Minister Mevlut Cavusoglu then clarified that the agreement with the USA constitutes a “pause” of the military operation “Source of peace”, which will turn into a definitive end of the offensive only if the Kurds withdraw entirely, as agreed.

“It is not a ceasefire – said Cavusoglu in statements broadcast live on al-Jazeera satellite TV – Turkey will be able to stop the operation only when all the terrorist elements have left the area along the border between Syria and Turkey”.

In practice, the Kurds should allow the 32 km for 460 km long, equal to 13,800 kmq of Syrian territory larger than the entire Lebanon, due to a unilateral diplomatic decision. They should give what they are risking their lives for.

And the government of Damascus should accept all this. It is clear that this is the umpteenth provocation to tell the world that the US and Turkey are the good ones and that the Kurds, now allies of Syria and Russia, are the villains. A lie that only a moron can believe…

Infact, the Bashar Al Assad’s spokeswoman has already told Sputnik International that Syria is neither willing to grant the territory of Rojava to the Autonomous Administration of the Kurds nor to Turkey.

Infact, Mazlu Abdi, SDF commander, replies that Kurdish accept the cease-fire «but not that Turkey remains in the region. They don’t accept an occupation or demographic change» according to Rojava Information Center news (10 pm GMT + 1).

Specifying well in a public statement that the truce, to protect civilians and avoid new displaced persons, refers only to the combat zones.

Pence takes the lead and tells the world media that “The withdrawal of Kurdish Ypg militias from the border with Turkey has begun”. But no Kurdish source, beginning with the Rojava Information Center (RIC), confirms the news.

Indeed at 8.27 pm today (GMT +1) the Ric confirms that fighting continues between the Turkish army and SDF soldiers in Sere Kanye, a place where the Ankara armed forces also bombed Red Crescent ambulances while they were helping the wounded.

Erdogan’s dirty double game is always the same: he reaches international agreements as for Idlib with Russia, and today with the US for Rojava, then he waits for his jihadist terrorist friends to launch rockets and grenades on soldiers and civilians, he waits that the Syrian army react to defend itself and therefore feels authorized to resume military operations.

Dozens and dozens of times have happened to Idlib. I think it will happen again in Rojava with the approval of Pence, who despite being a Protestant politician does not seem to have even spent a word on the Christian children killed by the Erdogan bombs in Qashimli.

Pure hypocrisy to erase Trump’s shame that he even managed to declare that the Kurds are worse than ISIS. For the USA and CIA, after all, it is true: Al Baghdadi and its Islamic State are their creatures quite controllable. The Kurds no. They are a people that for decades has been looking for a land where they can live peacefully and was used by Washington for its shady business in Syria looking for Middle East dominance and oil stealing.