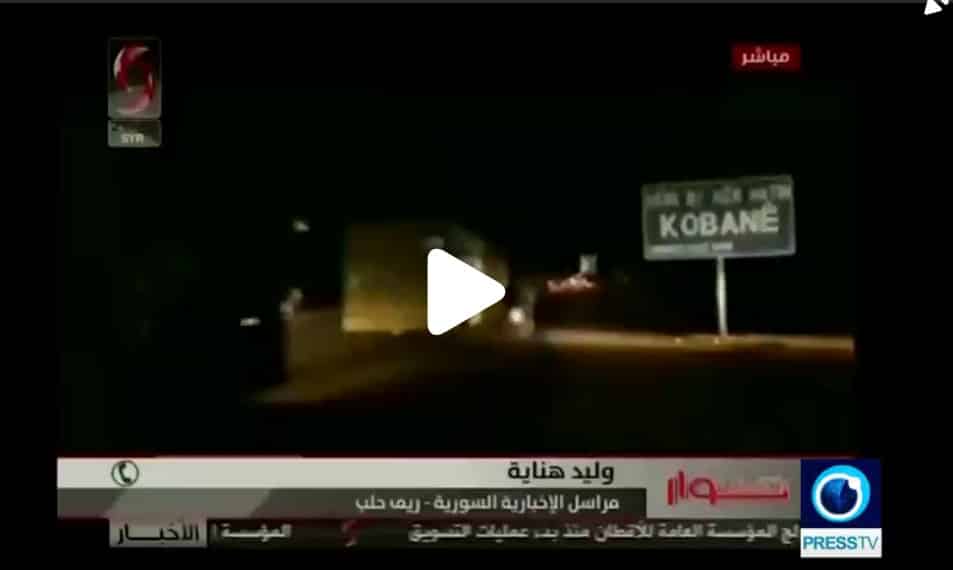 Units of Syrian government troops have entered a strategic Kurdish-populated city in the country’s northern province of Aleppo, amid an ongoing military offensive by Turkish soldiers and allied militants against Kurdish forces in the northern part of the war-battered Arab country.

The CIA/MI6 funded fake Syrian Observatory for Human Rights reported on Wednesday that Syrian troops entered Kobani, officially Ayn al-Arab, after militants from the Kurdish-dominated and so-called Syrian Democratic Forces (SDF) cut a deal with the Damascus government for army troops to deploy at the border and confront the Turkish military campaign against the Kurds.

Earlier in the day, Lebanon’s Arabic-language al-Mayadeen television news network reported that Syrian army forces had been deployed in villages in Syria’s northern province of Raqqah.

An unnamed field source also told Russia’s Sputnik news agency that Syrian government forces entered the city of Raqqah, the former de facto capital of Daesh Takfiri terrorist group in Syria, for the first time in five years and installed some checkpoints there.

On Monday, Syrian government forces arrived in the towns of Tabqa, on the outskirts of Raqqah, and Ayn Isa, which served as the headquarters of the Kurdish-led autonomous administration in northeast Syria and is located 32 kilometers (20 miles) from the Turkish border.

The shift by Kurdish forces under Turkish fire came after President Donald Trump’s abrupt decision in recent days to withdraw US troops from northeastern Syria, leaving Kurdish forces that had allied with the US-led military coalition purportedly fighting the Daesh terror group vulnerable to Turkish offensive.

Later in the day, Syria’s official news agency SANA reported that government forces had entered a number of villages on the outskirts of Tell Tamr town in the northeastern province of al-Hasakah.

Meanwhile, the so-called Syrian Observatory for Human Rights (SOHR) reported that Syrian army forces have deployed alongside Kurdish forces on the front line in northern Syria.

The Britain-based monitor reported on Wednesday that government troops and Kurdish militants were “fighting together” against Turkish-sponsored militants northeast of Ayn Issa.

The Observatory added that “violent clashes” are underway near the M4 highway, which runs from the western coastal city of Latakia to Saraqib city in Syria’s northwestern province of Idlib.

“We should end the fighting immediately”

Separately, the United Nations Special Envoy for Syria, Geir Pedersen, said on Wednesday that he had repeated the appeal for fighting to end “immediately” in northeastern Syria.

“We obviously concentrated on the situation in the northeast and I repeated the Secretary General’s (António Guterres’) strong appeal that we should end the fighting immediately, that there needs to be a cessation of hostilities, and that we are extremely alarmed by the humanitarian consequences of the crisis and that, we today, have seen already too many people killed and of course more than 160,000 people being displaced,” Pedersen told reporters following talks with Syrian Foreign Minister Walid al-Muallem in Damascus.

He added, “There is only a political solution also to the crisis in the northeast and we are appealing to all parties to participate in this. We also discussed the launching of the constitutional committee and we had a rather detailed discussion on how we are going to move forward with the launch of the committee by the end of this month.”

“I will continue to have discussions with the co-chairs of the government list and the co-chair of the opposition. I must say that so far, the discussions I had here in Damascus and with the opposition in Riyadh have been very good when it comes to launching the constitutional committee. Of course, this hopefully can then be a door opener, as I have said many times, to a broader political process,” the senior UN official pointed out.

PressTV-Erdogan: No talks with Syria Kurds until safe zone established

President Recep Tayyip Erdogan says Turkey’s military operation in Syria’s north will only end when the Kurds leave the region and a “safe zone” is established there.

Furthermore, the United Nations Security Council has cautioned against the risk of “dispersion” of Takfiri in Syria, but stopped short of demanding an end to Turkey’s offensive against Kurdish forces there.

“Members of the Security Council expressed deep concerns over the risks of dispersion of terrorists from UN-designated groups, including Daesh,” the Council said in a statement.

The members of the UN body also declared themselves “very concerned (about) a further deterioration of the humanitarian situation” in northeastern Syria.

In a separate joint statement, the European members of the Council – namely Belgium, Britain, France, Germany and Poland – stressed the necessity of securing camps, where Takfiri terrorists are being held.

“The secure detention of terrorist fighters is imperative in order to prevent them from joining the ranks of terrorist groups,” they said.

US Ambassador to the United Nations Kelly Craft reiterated Washington’s demand for a halt to Ankara’s military campaign in northern Syria.

“Turkey’s military offensive into northeast Syria is undermining the campaign to defeat ISIS (Daesh), endangering innocent civilians, and threatening peace, security, and stability in the region,” she said.

Craft added, “The United States calls on Turkey to halt its offensive and to declare a ceasefire immediately.”

On October 9, Turkish military forces and Ankara-backed militants launched a long-threatened cross-border invasion of northeast Syria in a declared attempt to push Kurdish militants from the People’s Protection Units (YPG) away from border areas.

Ankara views the US-backed YPG as a terrorist organization tied to the homegrown Kurdistan Workers’ Party (PKK), which has been seeking an autonomous Kurdish region in Turkey since 1984. The YPG constitutes the backbone of the SDF.