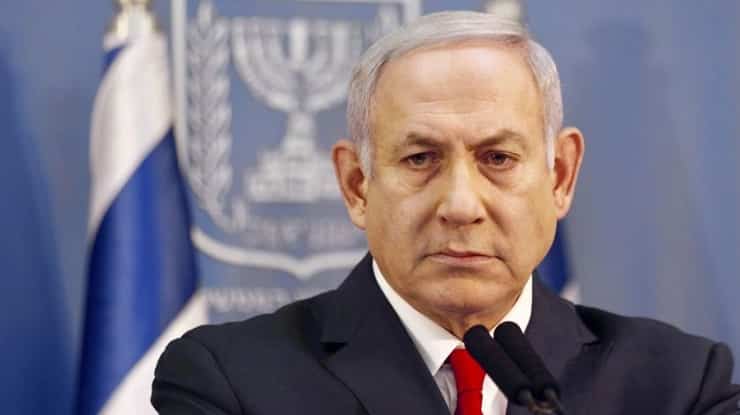 “Just societies cannot be run by big money or armed forces with their too narrow agendas. Limitless desire for wealth and blind ambition must be watched and contained as potential public dangers.” – Plato

[ Editor’s Note: The Syrian War has focused attention on that conflict and allowed another battle raging inside another Mideast country, Israel. It is a political one, but with stakes just as high as between Turkey and the new Syrian-Kurdish coalition that is reestablishing Damascus’ control over northern Syria.

Netanyahu is not only fighting for his political life but also to stay out of jail, as he does like the good life, as evidenced by the high-end boxes of cigars and cases of champagne that admirers pile on him to get some favors in return, like getting a military helicopter to fly around on business deals while in Israel.

Fruit of the tree Jews actually don’t like that kind of thing going on in high government. But in the past, even if convicted, like former Prime Minister Olmert was, they get short sentences with early releases.

If they have stolen enough that they did not get caught on, they can live well when they get out. Bibi’s net worth is in the millions; I have seen no effort to publicize how he did that on a public servant salary.

So far, in the post election battle to form a government, no one has given any quarter. It’s a three-ring circus, with more actors than there is room for wanting center stage. Someone has to lose, and many are really tired of Bibi the Bombastic… JD ]

Party lines and positions seem to be cast in concrete, with no one having the hammer and chisel to break them apart so a new arrangement can be formed. Part of the problem is the animosity between some of the various parties having long painful histories.

The Israeli Left is out of the picture, having died a slow death, to the point of only holding a few seats. Many of its members actually worked on election day, helping to drive Israeli Arabs to the polls to help them get 18-seats, the highest representation they have ever had.

The clock is ticking down on Netanyahu’s mandate to form a government next week, but all his attempts to negotiate one have run up against the promises that party leaders had made going into the election about who they would not have in their coalition.

The Joint Arab Party has remained above the fray, choosing to use its 18 Knesset seats in the new Parliament to be the first Arab opposition party in Israeli history, but it will miss out having any governmental ministries. As the official opposition, it is afforded special privileges like interacting with foreign leaders and getting security briefings. It is now in the bleachers watching the other parties try to wheel and deal themselves into power.

Parallel to the drama of forming a government is the Bibi courtroom drama, which has been woven into the daily fabric of negotiations. President Reuven Rivlin, after consulting all the parties on whom they preferred as a Prime Minister, gave the first mandate to Netanyahu.

Bibi has not been able to knit the magic number of 61 MPs together, and I learned today that he has not negotiated with anyone in the last twelve days, despite his October 24th mandate deadline. The law allows Rivlin to grant the holder of the first mandate an additional two weeks if he wants, but he has indicated no interest in considering doing that.

Likud sources have indicated that Bibi has been stalling his negotiations, hoping that Attorney General Mandelblit will drop the most serious bribery charge. The other two charges involve conspiracy to do something that was not actually carried out, which he has indicated may rise to the level for an official indictment.

With the indictment stone no longer around his neck, Bibi feels he would be in a stronger position to pull a government together. He had attempted to get an extension from Rivlin earlier to have more time for the Attorney General’s decision, but was refused.

Benny Gantz of the Blue and White has been hoping for that extension, so if AG Mandelblit would formerly indict Bibi on the case 4000 bribery charge, it would force the Likud party to depose him as party leader. Gantz would then not have to consider a rotating Prime Minister system with Bibi going through a corruption trial.

In early negotiations with Likud, Gantz had posed a rotating prime ministership with the condition that if Bibi were indicted, he would step down.

Bibi refused that, because he needed the first PM rotation to protect him from being indicted. His whole political strategy had been focused on saving his behind from a humiliating bribery conviction, with the country and everything else coming second.

The Likud party has had its own embarrassments during this process, most recently holding a party conference to elect their leader, where participants indicated a range of only about 100 to 300 attending, out of 3000 voting members. Mr. Netanyahu did not even show up, not wanting to have any pictures taken with such a low turnout.

The 300-member count was probably chosen for the attendance count, as that was required to have a quorum to vote. The event organizers were quite upset, as they had to hire a lot of expensive security for Bibi, as the state does not pay for his protection at political events.

Party political lines have so far been uncompromising. Mr Lieberman could have been a kingmaker for making Bibi Prime Minister, but his demand was that Bibi agree to end the long history of exempting the ultra-orthodox from the military draft and ending grocery stores closing on Saturday. But the military exemption has always been a prerequisite for the Orthodox to join any coalition.

On the Blue and White side, Gantz felt that by wining the most seats, even by one vote, that gave him a peoples’ mandate to form a liberal government, and the Lukid party should acknowledge that by excluding some of the ultra-Orthodox demands.

Gantz was not able to counter that with the threat of bringing the Arab Joint List into his coalition, as the Likud’s position was that it would never sit in a government with Arabs. Welcome to out-in-the-open Arab hating and discrimination in Israel, right in front of the World Press, and yet it is treated as a non-event.

Even Lieberman, representing the Russian Israelis, has been reiterating his demand for a broad, liberal government. On a tour of Herodium with his party’s Knesset members he said, “We would truly be happy to hear from the prime minister that he’s dismantling the bloc he created with the ultra-Orthodox and the messianists, and then there’d be something to talk about… Prime Minister Benjamin Netanyahu is trying to drag the state to a third election.”

On his Facebook page was this statement, “Five days ago, the head of Yisrael Beytenu’s negotiating team, MK Oded Forer, contacted Likud to open negotiations for establishing a unity government. Until now, no response has been received. The conclusion is that the Likud is not interested in the establishment of a unity government, but only the PM’s position and the ministerial positions.”

President Rivlin has pushed for a broad coalition government anchored with both Likud and the Blue and Whites. As the elder statesman, he has reached out to the patriotism of both sides that they must set their differences aside for the sake of the country.

They should not be putting the country through a 3rd election, as it is suffering fatigue. The country drifts through these stormy political party showdowns, while its legislative business is at a standstill. The upside is that Bibi has not been calling for attacks on Hamas in Gaza, Hezbollah in Lebanon, or bombing Iranian nuclear facilities.

As this political slugfest continues, the Deal of the Century sits dead in the water. The Palestinians have paid little attention to the government formation battles, as they see no change in their treatment, no hope of anything, no matter who wins.

But Bibi was able to take time out of his busy schedule to make a supportive statement for the Kurds in Northern Syria, denouncing the Kurdish incursion. That has turned into its own insane asylum, with the news today that the US and Turkey have decided what is going to happen to Northern Syria.

They announced a ceasefire without consulting either the Syrian government or the Kurdish parties who have put themselves under the command of the Syrian Arab Army to fight off the Turks, standing side-by-side, when the US has withdrawn its forces.

Observers might look at all this happening and say, “You just can’t make this stuff up, nobody would believe it!”