[ Editor’s Note: One would think that Turkey could arrange to stop airstrikes inside a Syrian border town on the first day of the ceasefire, but alas it could not. Is anyone surprised?

The US continues to operate independently by announcing it is going to start moving ISIS PoWs in a way where Syria and the SDF, which is now part of the Syrian Army, do not have to be consulted. And how does this tie into Trump’s claim to “let them sort it out, it’s their problem?”

I was not holding my breath, as we have a long history of Mr. Aderol saying one thing one day and then walking it back the next. Either he can’t remember what he said from day to day, or it is all part of his reality tv show hustle of rewriting the script, so viewers have to stay constantly focused to know the twists and turns of the story line.

We already see from this article that various parties were briefed differently about the deal, which could mean some parts of it were written and some parts were a work in progress to provide “flexibility”.

We are witnessing the usual scam, where they grab the headlines for being a reasonable participant, but then they “interpret the agreement” to accomplish what they wanted, in Turkey’s case… to remain in control of the Syrian side of the border.

When Erdogan puts his 3 million Syrian refugees in there, in a manner where we have seen no interest in involving the Syrian government in the process, he can pad that group with a six figure number of jihadis to continue creating mayhem in that part of the country, while using the Syrian refugees as human shields.

This is an evil man, and certainly not the only one on the scene there…Jim W. Dean ] 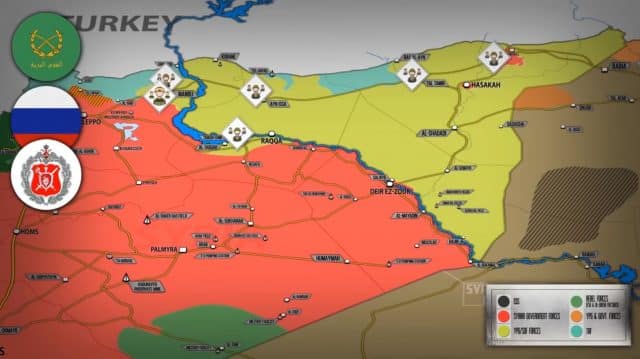 Turkish airstrikes kill at least five civilians while sporadic clashes continue with Kurdish forces despite a ceasefire agreed between Ankara and Washington in northeast Syria.

Machine gun fire and shelling could be heard while smoke arose from one part of the town, Reuters reported on Friday. Probable casualties and damage resulting from the clashes in the town have yet to be confirmed.

The civilians were killed following Turkish airstrikes on Bab al-Kheir which lies east of Ras al-Ayn, according to Rami Abdel Rahman, head of the so-called Syrian Observatory for Human Rights.

The reports come only 13 hours after Turkey agreed to “pause” the assault for five days allowing Kurdish fighters to withdraw from a determined “safe zone” north of Syria.

The Turkish capital hosted more than five hours of negotiations between a US delegation and Turkey’s President Recep Tayyip Erdogan earlier in the day. US Vice President Mike Pence told reporters on Thursday that Ankara’s incursion “will be halted entirely on completion” of the withdrawal of the fighters.

Certain details regarding the withdrawal, however, appear to be disputed between the parties to the agreement.

Pence has said that the deal obliges Turkey to not engage in military operations in the Syrian border town of Ayn al-Arab, also known as Kobani. Turkish Foreign Minister Mevlut Cavusoglu has, however, said Ankara has made no commitments about the town.

Also speaking on Thursday, Mazlum Abdi, commander of the Syrian Democratic Forces which leads Kurdish-led forces in the region, told a Kurdish TV station that the group would accept the deal but that it was limited to the border areas running between Ras al-Ayn and the town of Tal Abyad.

Turkey launched its invasion of Syria on October 9 with the alleged aim of creating a “safe zone” south of its border with Syria.

Ankara says Kurdish forces operating in the area are terrorists linked to the homegrown Kurdistan Workers’ Party (PKK) militant group, which has been seeking an autonomous Kurdish region in Turkey since 1984.

“No matter what false slogans could be made up for the Turkish offensive, it is a flagrant invasion and aggression,” he said.

The Syrian president vowed to “respond to the assault and confront it anywhere within the Syrian territory through all legitimate means available.” Earlier this week, Syria deployed troops to northern Syria after Kurdish-led forces turned to Damascus to counter the Turkish invasion.

Following the deal on Thursday, Moscow issued a statement urging Ankara to provide information regarding the deal negotiated with the US.

Erdogan is due to hold talks with Russian President Vladimir Putin on Syria next week in Russia. Russian troops have also been deployed alongside the Syrian forces that have been sent to counter the Turkish invasion.

On Tuesday, the Russian Defense Ministry announced that its military police were patrolling areas between Turkish and Syrian forces near Syria’s northern city of Manbij, which is a flash point currently under Syrian control. The patrols seeks to avoid confrontations between the two opposing forces.