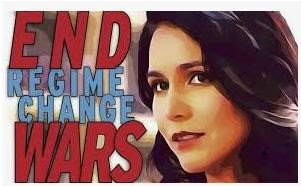 Just ahead of the Democratic presidential debate, Hillary Clinton unflinchingly declared that one of the candidates is a “favorite of the Russians.”

She moved on to say that the Russians “also going to do third-party again. And I’m not making any predictions, but I think they’ve got their eye on somebody who is currently in the Democratic primary and are grooming her to be the third-party candidate. She’s the favorite of the Russians, they have a bunch of sites and bots and other ways of supporting her so far…”

Clinton, of course, did not mention Tulsi Gabbard by name, but everyone knew who she was referring to. Elizabeth Warren, Amy Kloubuchar, and Kamala Harria have never been accused of allying with Russia. It is only Gabbard who has had to endure stupid accusations like this. The Associated Press reported:

“Clinton’s spokesman Nick Merrill told CNN in response to a question about whether the former secretary of state was referring to Gabbard: ‘If the nesting doll fits.’ This is not some outlandish claim. This is reality,’ Merrill told CNN. ‘If the Russian propaganda machine, both their state media and their bot and troll operations, is backing a candidate aligned with their interests, that is just a reality, it is not speculation.’”

The Daily Beast got into the game by saying that Gabbard’s campaign was being “underwritten by some of the nation’s leading Russophiles.” Victoria A. Brownworth, “a Pulitzer Prize-nominated journalist,” said: “I have covered politics for 30yrs. Never has there been a Democratic presidential candidate endorsed by brutal dictators and alt-right neo-Nazis and KKK.#IamTulsi Gabbard is endorsed by ~Bashar al-Assad~David Duke~Richard Spencer~Steve Bannon~Tucker Carlson.”

Gabbard rightly responded to Clinton in a way that Clinton was not expected. Gabbard said:

“Great! Thank you Hillary Clinton. You, the queen of warmongers, embodiment of corruption, and personification of the rot that has sickened the Democratic Party for so long, have finally come out from behind the curtain.

“From the day I announced my candidacy, there has been a concerted campaign to destroy my reputation. We wondered who was behind it and why. Now we know — it was always you, through your proxies and powerful allies in the corporate media and war machine”

Gabbard, of course, does not approve the war in Syria and indeed perpetual wars, so the entire Democratic Party is attacking her, calling her outrageous names. Gabbard again said in response to the accusation that she is working with the Russian and Syrian governments:

What Gabbard is indirectly saying here is that if a foreign policy is in the interest of the American people, then the warmongers, and the political whores and prostitutes will have nothing to do with it. This is one reason why Gabbard unequivocally told Donald Trump a few weeks ago: “We are not your prostitutes.”