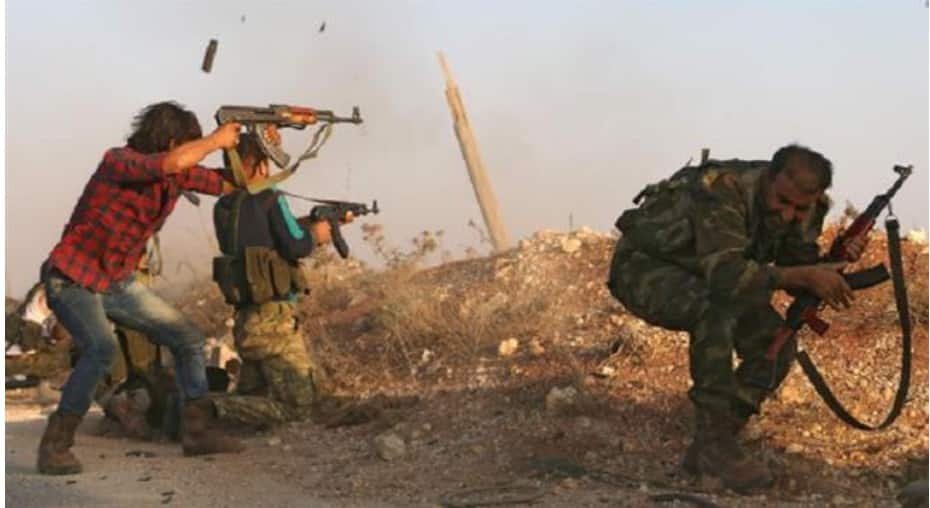 The United States supported and funded most of the militant factions grouped in the so-called Free Syrian Army (FSA), which is now aiding Turkey in an offensive against US-backed Kurds in Syria, a new document reveals.

Syria’s official news agency SANA, citing a newly-released document by the pro-government Turkish think tank SETA, said in a report on Sunday that the White House not only gave the green light to Ankara to launch its so-called Operation Peace Spring against the Arab country, but also placed its “mercenaries and terrorist… at the disposal of Turkey.”

According to the SETA document, which is a research paper, 21 militant factions of the Ankara-backed FSA had been supported by Washington either directly through the Pentagon or through the CIA and the operating room affiliated to it in Turkey.

“Out of the 28 factions [in the FSA], 21 were previously supported by the United States, three of them via the Pentagon’s [so-called] program to combat Daesh. Eighteen of these factions were supplied by the CIA via the MOM Operations Room in Turkey, a joint intelligence operation room of the ‘Friends of Syria’ to support the armed opposition. Fourteen factions of the 28 were also recipients of the US-supplied TOW anti-tank guided missiles,” said the SETA document.

Turkish military forces and the FSA militants on October 9 launched a cross-border invasion of northeast Syria in a declared attempt to eliminate Kurdish militants from the so-called People’s Protection Units (YPG) from border areas.

The US-backed YPG acts as the backbone of the so-called Syrian Democratic Forces (SDF).

Ankara views the US-backed YPG as a terrorist organization tied to the homegrown Kurdistan Workers’ Party (PKK) militant group, which has been seeking an autonomous Kurdish region in Turkey since 1984.

The YPG, which itself is the military wing of the Syrian Kurdish Democratic Union Party (PYD), constitutes the backbone of the SDF.

The Syrian government has condemned the offensive as an act of aggression.

Turkey’s President Erdogan says Ankara will implement its own plan in Syria if an upcoming meeting with his Russian counterpart Putin fails to produce expected results.

The SETA document further said what the US called the so-called “moderate opposition” was in fact militant factions armed and trained under the administration of former US president, Barack Obama, and then moved under the umbrella of the current Turkish offensive against Syria.

It said that although Washington later began supporting the YPG militants, it still had links with the so-called “moderate opposition” now fighting the YPG.

“Over the course of time, the United States has changed horses in midstream by supporting the YPG. However, it still has not completely cut its ties to the Syrian opposition,” said the document.

The report comes as Syrian government forces have recovered US- and Israeli- made weapons from Daesh hideouts during anti-terror operations across the country.

It added that some US officials, who are now harshly criticizing the militants, had personally met with their leaders.

As an example, it mentioned the visit of former US secretary of state, Hillary Clinton, to Istanbul in 2012 to rally support for militant groups, pointing out that those outfits would not have existed without Washington’s support and the spending of billions of dollars over many years.

The SANA report also touched on the so-called “White Helmets” group, which was founded with Western funding.

Since its establishment, the group has reportedly received at least 55 million dollars from the British Foreign Office, and 23 million dollars or more from the US Office of Transition Initiatives, among other sources.

The US has vowed to provide a $5-million donation for the so-called aid group “White Helmets”.

Anti-Damascus states, including the US, tried to give the group a humanitarian character, but evidence, facts, photos, and field footage proved it to be a “terrorist platform” that supported terrorist organizations and operated under a humanitarian cover, SANA said.

The Turkish military had launched two cross-border incursions in northern Syria, namely “Euphrates Shield” in August 2016 and “Olive Branch” in January 2018, with the declared aim of eradicating Kurdish militants and Daesh terrorists near Turkey’s borders.