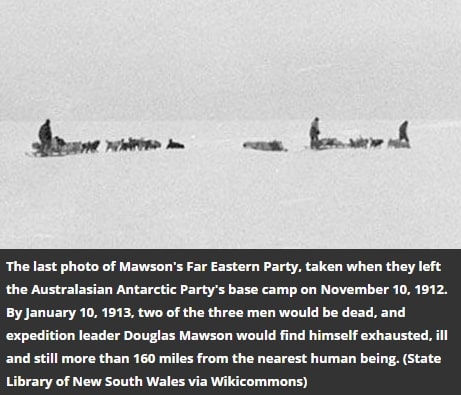 The Most Terrible Polar Exploration Ever: Douglas Mawson’s Antarctic Journey

Even today, with advanced foods, and radios, and insulated clothing, a journey on foot across Antarctica is one of the harshest tests a human being can be asked to endure. A hundred years ago, it was worse. Then, wool clothing absorbed snow and damp. High-energy food came in an unappetizing mix of rendered fats called pemmican. Worst of all, extremes of cold pervaded everything; Apsley Cherry-Garrard, who sailed with Captain Scott’s doomed South Pole expedition of 1910-13, recalled that his teeth, “the nerves of which had been killed, split to pieces” and fell victim to temperatures that plunged as low as -77 degrees Fahrenheit.

Cherry-Garrard survived to write an account of his adventures, a book he titled The Worst Journey in the World. But even his Antarctic trek—made in total darkness in the depths of the Southern winter—was not quite so appalling as the desperate march faced one year later by the Australian explorer Douglas Mawson. Mawson’s journey has gone down in the annals of polar exploration as probably the most terrible ever undertaken in Antarctica.