[ Editor’s Note: This comes as no surprise. The early report of Syria taking control of the Omar oil fields back after its deal with the Kurds was not followed up with any official statement from Damascus or media confirmation on the scene.

VT’s correspondent there, despite contacts with the local tribes in the area, could not confirm, either. We saw that the “oil card” was still in play, especially when Trump made the statement about “we have secured the oil”. It could only have meant one thing.

Here we have the gangster US, dealing with UN members like an Italian mob boss in old New York City days, determining whose gangs would have control over what rackets, prostitution, gambling, drugs or business shakedowns.

Will the powerless UN do anything about this, where all the US has to do is sprinkle the “we are protecting it from ISIS fairy dust” around and take control of anything it wants to “protect”?  Don’t hold your breath.

The US will use the money from these oil wells to pay off the Kurds, telling them to play along with Assad for whatever they can get, but we are still in this thing together, only less visibly so. As Gordon does so love to say, “It’s a nasty world out there”… Jim W. Dean ] 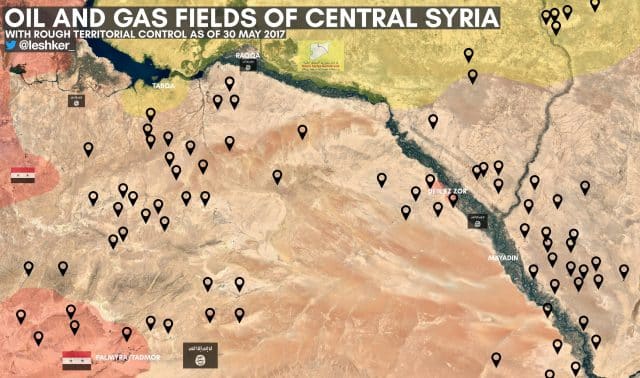 Pentagon chief Mark Esper has confirmed that keeping some US troops in parts of northeastern Syria near oilfields is being discussed, but no decision has been made.

“There has been a discussion about possibly doing it (keeping some troops), there has been no decision with regard to numbers or anything like that,” Esper told reporters in Afghanistan Monday. Esper claimed the purpose was to “deny access, specifically revenue to ISIS [Daesh] and any other groups that may want to seek that revenue to enable their own malign activities.”

His remarks came after the New York Times said President Donald Trump is expected to approve a new plan to keep a few hundred US troops in eastern Syria in order to help his Kurdish allies retain control of oil fields.

The paper cited a senior administration official as saying Sunday that Trump is leaning towards a new Pentagon plan to keep a contingent of nearly 200 Special Operations forces at a few bases in eastern Syria, some near the Iraqi border.

The plan would help Kurdish militants keep control of oil fields in the east and prevent Syrian government forces from reinstating control over territories occupied by foreign troops and their proxies.

The so-called Syrian Democratic Forces, a Kurdish-led group of militias backed by the US, has switched sides to join Syrian government forces after Trump announced the American withdrawal.

The new plan appears to be an attempt by the US to pry the Kurds away from the central government in Damascus and retain control over Syria’s oil fields. Trump seemed to hint at this outcome in a tweet on Sunday, saying, “We have secured the Oil.”

Three other administration and Pentagon officials confirmed to the New York Times over the weekend that top American policymakers and commanders were discussing the option. Trump would need to approve any plan to leave forces anywhere in Syria in addition to the about 150 troops in al-Tanf garrison in the south-central part of the country near the Iraqi border.

If endorsed, it would mark the second time in less than a year that Trump has reversed his own order to withdraw nearly all American troops from Syria.

Late last year, Washington stopped a Turkish invasion after Trump announced a plan to withdraw 2,000 American troops from Syria immediately. He later relented and agreed to a “gradual” pullout.

Earlier this month, Trump gave the green light to Turkey to launch a military invasion in northern Syria. Ankara says it wants to eliminate YPG militants which it regards as terrorists affiliated with the homegrown PKK militant group.

The discussion over leaving a contingent of American troops in eastern Syria was unfolding as the bulk of the almost 1,000 American forces now in the Arab country continued to withdraw on Sunday.

News agencies said Monday US troops have crossed into Iraq from Syria through the Sahela border crossing in the northern province of Dohuk. Video images showed armored vehicles carrying troops into Iraq, with Iraqi Kurdish sources saying that US troops had crossed into the semi-autonomous Kurdistan Region of Iraq.

Esper said on Saturday that all of the nearly 1,000 troops withdrawing from northern Syria were expected to move to western Iraq. With US troops in Iraq and Turkish forces in Syria, some observers are wondering whether Ankara and Washington are coordinating their moves for a new chess game in the region.

Republican US Senator Lindsey Graham, who has been one of the most vocal critics of Trump’s decision to move US troops out of northeastern Syria, reversed his stance Sunday and said he now believed “historic solutions” were possible.

On Thursday, Turkey agreed in talks with US Vice President Mike Pence to a five-day pause in its incursion to allow time for the Kurdish fighters to withdraw from a “safe zone” Ankara aims to establish in Syria.

The planned “safe zone” would go 32 km (20 miles) into Syria. Turkish President Recep Tayyip Erdogan has said it would run for some 440 km from west to east along the border.