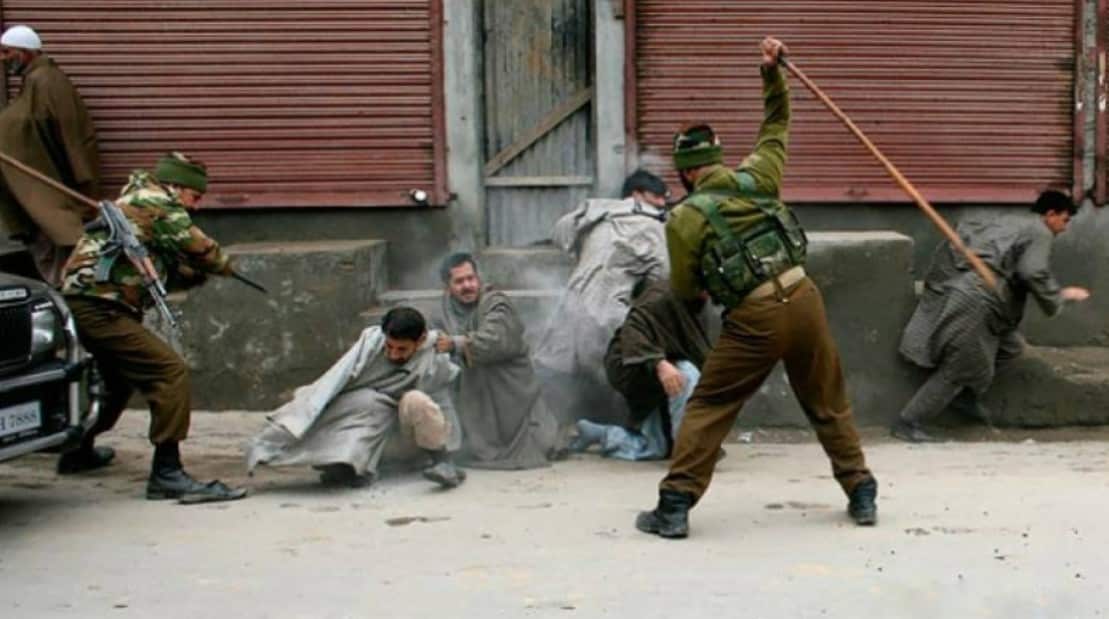 More than 75 days have passed. India has continued its military clampdown and strict communications blackout in the Indian Occupied Kashmir (IOK) by continuing curfew in wake of shortage of foods and even medicines for the patients.

Tensions between India and Pakistan accelerated on August 5, this year, when New Delhi unilaterally annexed the IOK, revoking articles 35A and 370 of the Constitution which gave a special status to the disputed territory. Besides, Indian extremist rulers are also escalating tensions with Pakistan to divert attention from the drastic situation of the Indian Controlled Kashmir, and have intensified shelling inside Pakistani side of Kashmir.

In this regard, addressing an election rally at Ausa in Maharashtra’s Latur district for state polls which held on the October 21, 2019, Indian Congress leader Rahul Gandhi said on October 13, 2019:

“Prime Minister Narendra Modi abrogated Articles 370 and 35A on one hand and farmer-unemployment issues on the other…Prime Minister Modi and…BJP nationalist president…Union Home Minister Amit Shah are deflecting the core issues and asking youths to watch the moon when they are demanding jobs…the media is [also] distracting people’s attention from the real issues like the downfall of the economy…Most of the media houses are owned by big corporate houses and some of their names are well-known such as Ambani, Adani etc.

“The Modi government has waived Rs 5.5 lakh crore [loan] of these people…divisive politics is one of the reasons behind the closure of scores of factories…What Modi and Shah are doing is to divert the attention of the people from the real issues and focus on Corbett Park, Moon, China Pakistan…They are conveniently silent on the issues that are plaguing the country…the real objective of moves like demonetisation in 2016 and rollout of Goods and Services Tax (GST) was to help the rich at the cost of the poor people….The real target of the note ban and GST was to take out money from pockets of poor and give it to the rich”.

Undoubtedly, the extremist Premier Modi and fundamentalist parties BJP, including its fanatic coalition outfits, are supporting brutal tactics in the IOK to divert attention from the multi-faceted internal issues which need analysis.

In this respect, on the one hand, India has rapidly been making progress in modern technologies-especially arms and ammunition with the help of the Western countries, while on the other, it has world’s largest number of poor people.

It is noteworthy that Global Hunger Index (GHI) indicated in its report on October 16, 2019:

“India falls behind Pakistan, Bangladesh, Nepal in global hunger index; ranks 102nd among 107 countries…India is among 45 countries that have serious levels of hunger…India’s child wasting rate  is extremely high at 20.8 per cent…the highest wasting rate of any country…In India, just 9.6 per cent of all children between 6 and 23 months of age are fed a minimum acceptable diet…as of 2015-2016, around 90 per cent of Indian households used an improved drinking water source while 39 per cent of households had no sanitation facilities”.

Regarding India’s economic problems, Al Jazeera pointed out on August 30, 2019:

“Fears of an economic slowdown in India are mounting after figures published…showed that growth slackened to its slowest pace in six years. India’s economy grew only five percent year over year from April to June [2019], according to data released by the country’s Central Statistics Office. Overcoming anemic economic activity is a major hurdle for the government of Prime Minister Narendra Modi as it aims to transform India into a $5 trillion economy by 2024…

“The auto industry, seen as a bellwether for activity, has reportedly laid off 350,000 workers since April…Many of the measures were U-turns on Sitharaman’s July budget announcement, which was criticised by some as unnecessarily punitive to business….The value of new projects announced between 2018 and 2019 hit a 14-year low, according to the Centre for Monitoring Indian Economy. This indicates a lack of business confidence.

“Financial markets have also not recovered fully from a liquidity crisis induced by last year’s collapse of Infrastructure Leasing & Financial Services, a major non-bank lender… India’s tax revenue is currently 16 percent short of budget estimates due, according to the Economic Survey 2018-19…The July budget, which came after the ruling Bharatiya Janata Party secured a huge victory in the May 2019 elections, also disappointed those who expected to see greater clarity on the government’s reform agenda…

“Critics have recently suggested the recent revocation of article 370,  which has brought media reports of unrest to Indian-administered Kashmir, is a tool to detract attention away from an ailing economy.”

It is notable that in 2017, Indian government of PM Modi announced economic reforms, claiming that the country’s economy was in a strong position. Instead of improving the economy, Premier Modi wanted to make India, an economic power to counter China. Modi’s hastily planned economic reforms created many domestic social evils in the country and have resulted into wearisome economic policies for citizens.

BJP former lawmaker and finance minister Yashwant Sinha, while pointing out poorly planned economic reforms stated: “Private investment has shrunk as never before in two decades, industrial production has all but collapsed, agriculture is in distress, construction industry, a big employer of the work force, is in the doldrums and exports have dwindled.”

On March 6, this year, Rahul Gandhi has claimed: “There is now enough evidence to prosecute Indian Prime Minister Narendra Modi in Rafale deal…the trail of corruption in the Rafale fighter jet deal begins and ends with…therefore, an FIR should be lodged against him…crucial Rafale files incriminating him are now reported stolen by the Government, is destruction of evidence.”

It worth-mentioning that during a visit to France in 2015, Modi scrapped the deal, signed under the previous government led by the Congress party, and ordered instead 36 jets—all to be built in France— for an estimated $9.4 billion.

According to a report about India, “Of its more than 1 billion inhabitants, nearly 260.3 million are below the poverty line, of which 193.2 million are in the rural areas and 67.1 million are in urban areas”.

In this connection, under the caption “Incredible and Shining India a Myth”, published on the Kashmir Media Watch and the KMW News on March 29, 2019, Dr. Arif Javid Wrote:

“More than 800 million people in India are considered poor. 68.8% of the Indian population lives on less than $2 a day. India is one of the world’s top countries with regard to malnutrition. More than 200 million people don’t have sufficient access to food… alarming figures for a country commonly referred to as the emerging market…Although child labour for children under the age of 14 in India is prohibited by law, according to official figures, 12.5 million children between the ages of 5 and 14 are working…in reality, there are many more estimating that 65 million children…do not go to school….

“Inequality in India is based not just on class but caste, sexuality and gender as well…A Dalit woman can expect to live almost 14.6 years less than one from a high-caste…this inequality costs India its human potential…The Centre for Monitoring the Indian Economy reported a loss of 1.1 crore jobs in 2018 and estimated that the unemployment rate reached a 15-month high of 7.4% in December 2018…Four hundred thirty farmers committed suicide during last year in agriculture rich Punjab alone. As per Guardian report, in 2015, about 12,602 farmers committed suicide across India”.

Nevertheless, acute poverty has added to psychological problems, noted among these Indians like emotional disturbances and depression. Owing to poverty, there are other social abuses of children like kidnapping and forcing them to beg in streets, including murder.

As regards women and the young ladies, in a gender-biased society of India, apart from other poverty-related sufferings, working women have to face a number of problems such as injustice of unequal salaries and wages for the same job—abductions and rapes.

Recently, there have been many cases of sexual harassment involving even the senior women officials, working in civil and military establishments. Theft, robbery and rape which have become routine matter in India, which have also been conducted against the Western nationals from time to time.

Failure of Modi’s economic plans has especially affected the Indian police officials who have accelerated the practice of corruption.

Since the leader of the ruling party BJP Modi became Prime Minister of India, various developments, like the unprecedented rise of Hindu extremism, persecution of minorities even of lower cast-Hindus, forced conversions of other religious minorities into Hindus, ban on beef and cow slaughter, inclusion of Hindu religious books in curriculum, creation of war-like situation with Pakistan etc., clearly show encouragement by the Hindu fundamentalist outfits such as BJP, RSS VHP, Bajrang Dal and Shiv Sena, including other similar parties, which have promoted religious and ethnic chauvinism in India by propagating ideology of Hindutva (Hindu nationalism).

Particularly, assaults on Christians and Muslims, including their places of worship and property have been accelerated by the fanatic Hindu mobs.

In the Indian general elections of 2019, BJP and National Democratic Alliance (NDA) won huge majority in the Lok Sabha, with the BJP sweeping up 303 seats on its own—21 seats more than it won in the 2014 elections.

Across most of North and Central India, BJP candidates also won with bigger vote shares and wider victory margins than in 2014. Hindu majority was mobilized on ‘hate Muslim’ slogans and ‘anti-Pakistan’ jargons, while the incessant and unjust Indian propaganda against the Muslims and Pakistan was beyond anybody’s cognition, which still keeps on going. Indian Prime Minister Modi’s extremist party BJP had also got a landslide triumph in the Indian elections 2014 on the basis of anti-Muslim and anti-Pakistan slogans.

In these terms, Modi-BJP-led coalition has been emboldened, and they continued clampdown in the occupied Kashmir, including violations of the Line of Control (LoC) by shelling inside the Pakistani side of Kashmir, compelling the Pakistan Army to give a matching response.

Through such an aggressive strategy and anti-Muslim approach, New Delhi wants to divert attention from internal issues without bothering for the fact that such a policy may result in conventional war with Pakistan, which could culminate into nuclear conflict between the two neighbouring countries.