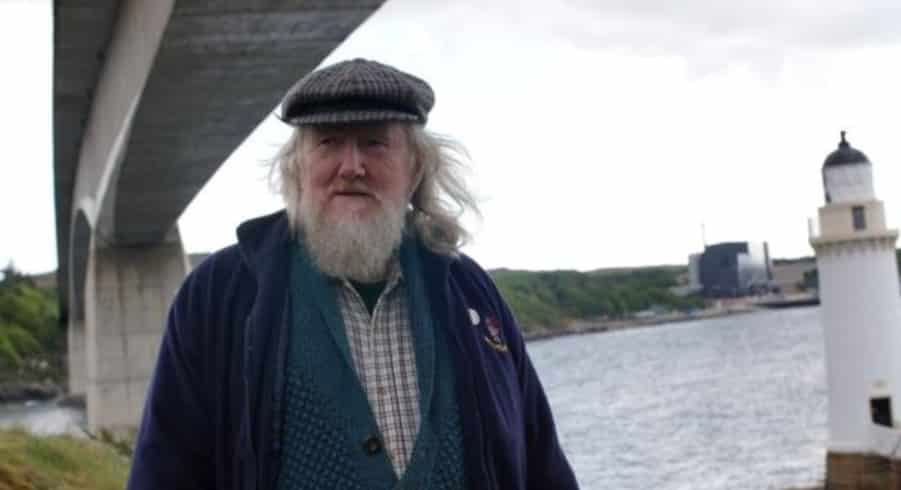 Introduction: Britain decided it could simply end ferry service to Skye, a two minute trip, and replace it with the ugliest and most dangerous bridge imaginable, virtually putting the residents of Skye, numbering in the thousands – make that many tens of thousands on weekends – virtual economic prisoners. Nobody could afford to live there…a privatization game fought by VT’s Robbie the Pict.

Carol and I spent some time with Robbie this summer, and with luck, at some point, Carol might dig up photos.

BBC: Campaigners in the long-running Skye bridge toll protest are still fighting to have 130 people’s criminal convictions repealed more than 15 years after tolls were abolished.

In a BBC documentary, David Hingston, the former Dingwall procurator fiscal who prosecuted the first protesters, has said the toll was an “outrageous” scam.

And if a pivotal piece of evidence produced by the Crown in the court cases was fabricated, Mr Hingston said it would be a “very serious crime” and could invalidate protesters’ convictions.

The Skye bridge between the island and the mainland opened in October 1995.

Despite an outcry from the community about the way the Conservative government of the time had commissioned the bridge as Scotland’s first Private Finance Initiative (PFI), the construction was seen by many as the route to economic prosperity for Skye.

However, it soon became clear that this was to be the most expensive toll bridge in Europe. Car drivers were charged up to £5.70 each way, compared with an 80p charge on the Forth Road bridge.

BBC documentary The Battle of Skye Bridge draws together recollections from campaigners and the authorities, along with never-broadcast archive footage.

The tolls were introduced at midnight on 17 October 1995. A storm was raging, but the uproar from the community was only beginning to stir.

Cameraman Alex Ingram recalled the first cars arriving at the booth with the drivers refusing to pay the toll, then through the rain came a pipe band, walking across the bridge, followed by dozens of cars.

And then, driver after driver refused to pay the toll. Several hours later, after refusing to leave, the protesters were charged and reported to the procurator fiscal.

Andy Anderson, one of the organisers of that protest, said: “What was important to me was on the first night, when I saw how many people turned up, [I thought] now we’ve got a chance, now we can fight them.”

So began a long and creative protest under the banner of Skye and Kyle Against Tolls (Skat) that drew in islanders from all walks of life and attracted international attention.

From driving flocks of sheep across the bridge to paying in pennies, the protesters sought to create drama as well as a disturbance.

Out of hundreds of non-payment cases, 130 people ended up with criminal convictions, and some spent time in prison because they refused to pay fines.

They are still fighting to repeal those convictions.

Robbie The Pict, a former policeman and RAF serviceman, took a leading role in the campaign and was charged for non-payment more than 100 times, leading to 25 convictions.

He established that the toll charges being collected for a US-based company could be illegal.

“The secretary of state allowed a private company to demand tolls, but it has to be done via an accompanying document called an assignation,” he told the documentary.

“Your name has to be on the assignation statement, otherwise it’s unlawful.”

Leaked documents seemed to prove that The Skye Bridge Company’s assignation document provided to the court by the Crown Office was fabricated from contractual agreements between the government and developers.