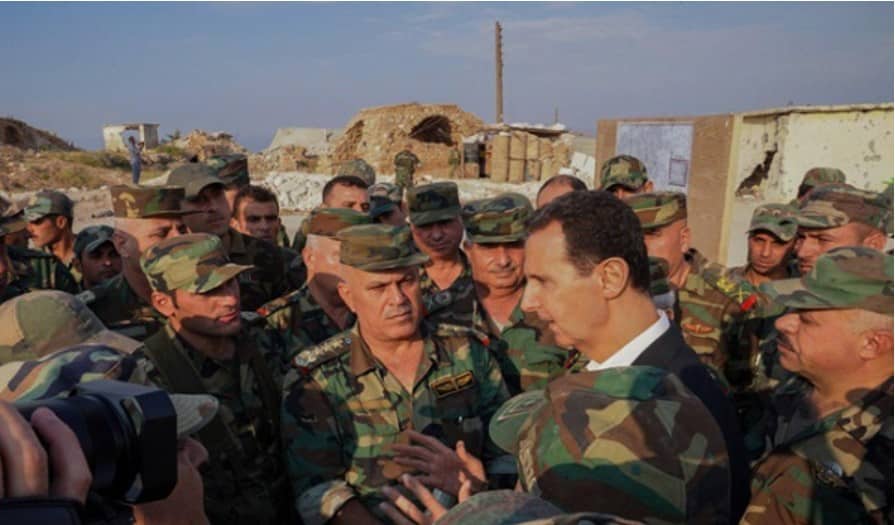 IDLEB, (ST)- President Bashar Al-Assad has stressed that the President of the Turkish regime Recep Tayyib Erdogan is a thief who stole the Syrian factories, wheat and oil and today he is stealing Syrian land.

President Al-Assad made the remarks during his meeting with soldiers and officers of the Syrian Arab Army on the front lines in al-Hbeit town of Edlib countryside.

The president affirmed that all the Syrian areas have the same importance, but what specifies priority is the military situation on the ground.

“We have been saying that the battle for Idleb is essential for ending chaos and terrorism in all the Syrian areas,” President Al-Assad added.

He made it clear that “when we are exposed to an aggression or robbery we must support each other and join efforts. But, some Syrians didn’t do that, particularly during the early years of the war… We asked them not to count on foreign parties…we told them that your bet should be on the army, the people and the homeland but nobody listened, and now they are counting on the Americans.”

President Al-Assad went on to say that as soon as the Turkish aggression started in the north of the country, we made contacts with the different political and military forces on the ground. We told them that we are ready to support any group that would resist.”

“This it is not a political decision, it is in fact a constitutional and national duty and if we don’t do that, we don’t deserve this homeland,” the president emphasized.

White Phosphorous use by Turkey against Syrian Civilians

UK’s “The Times” newspaper revealed on Monday evidence about the Turkish regime’s use of the internationally banned white phosphorus in its aggression on the Syrian territories.

In a report titled “Evidence of Turkish phosphorus attack mounts in Syria”, “The Times” explained the suffering and pain of the victims of the attacks with banned weapons by the Turkish invading forces.

It said that the serious injuries and terrible burns the victims are suffering from the Turkish regime’s attacks seem a result from something that is far worse than explosions, pointing out that this provides clear evidence about the use of the internationally-banned white phosphorous against Syrian civilians by a NATO member.

The newspaper quoted one of the doctors, who contributed to providing medical treatment to the victims, as saying that the burns are deep and their shape and smell are similar to the injuries caused by incendiary chemicals.