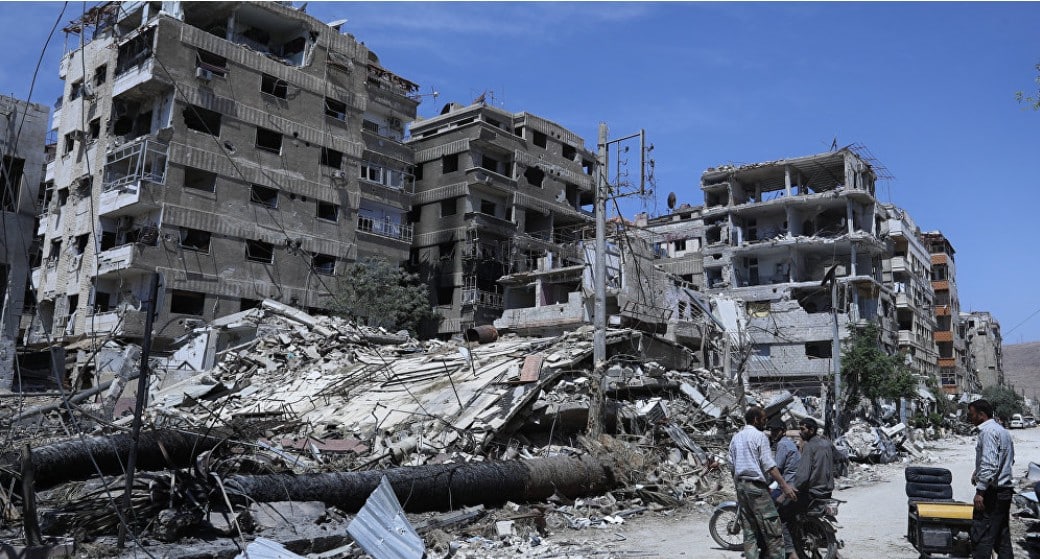 Sputnik/Moscow: WikiLeaks has published the findings of a panel that listened to testimony and reviewed evidence provided by a Organisation for the Prohibition of Chemical Weapons (OPCW) whistleblower, which casts major doubt on the body’s integrity and independence.

The evidence related to the OPCW’s investigation of the alleged 7th April 2018 chemical weapons attack in Syria. Jihadist forces claimed the Syrian Arab Army was responsible, a charge taken up by the US, UK and France – Damascus in turn contended the strike had been staged by local extremist elements.

Seven days after the contested strike, before an independent investigation into the incident could be conducted by any international body – and whether the attack had even taken place or not was concretely established – Washington, London and Paris carried out a series of airstrikes against multiple Syrian government sites. 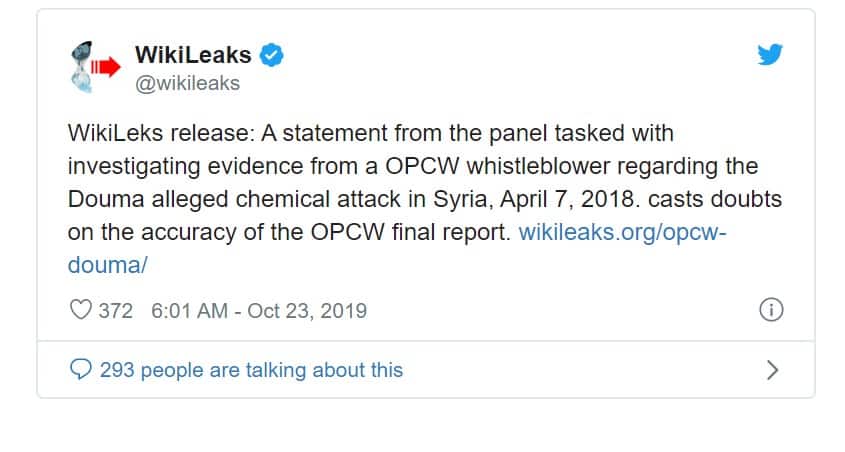 ​On 6th July that year, the OPCW issued an interim report based on the evidence it had so-far gathered – the document stated emphatically “no organophosphorus nerve agents or their degradation products were detected, either in the environmental samples or in plasma samples from the alleged casualties”. However, in March 2019, a final report was published, its conclusions totally contradicting those of its forebear.

“The evaluation and analysis of all the information gathered by the [Fact Finding Mission] —witnesses’ testimonies, environmental and biomedical samples analysis results, toxicological and ballistic analyses from experts, additional digital information from witnesses—provide reasonable grounds that the use of a toxic chemical as a weapon took place. This toxic chemical contained reactive chlorine. The toxic chemical was likely molecular chlorine,” it stated.

While the investigation didn’t specifically assign blame for the attacks, fundamental to the attack’s narrative was the notion cylinders containing the chemical had been dropped from government helicopters.

In May, this key tenet would be critically undermined when a report compiled by the OPCW’s Douma Fact Finding Mission’s engineering team in April 2018 was leaked by the Working Group on Syria, Propaganda and Media (WGSPM). Its conclusions were stark – “observations at the scene of the two locations, together with subsequent analysis, suggest there is a higher probability both cylinders were manually placed at those two locations rather than being delivered from aircraft”. 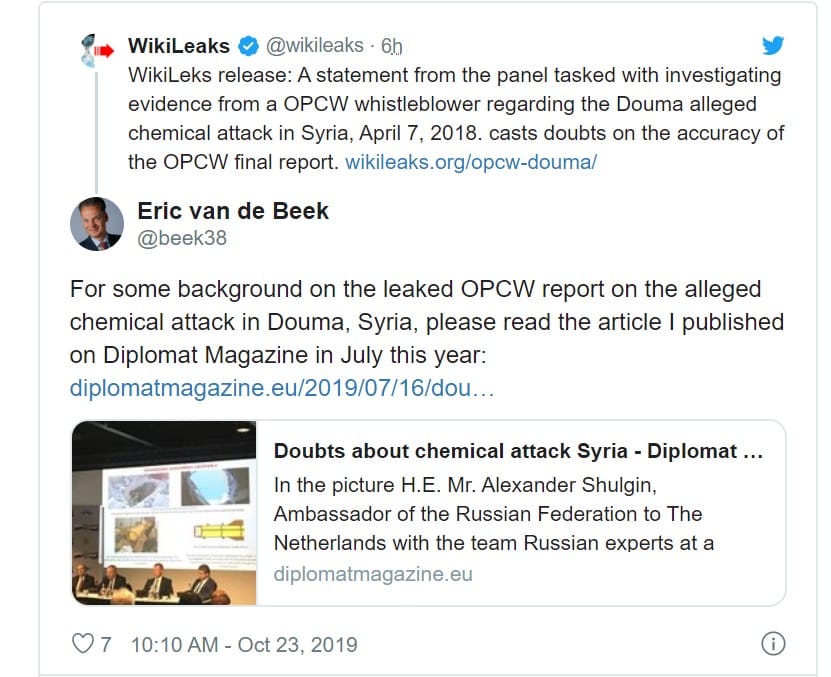 ​The engineering team’s investigation, and resultant report, had hitherto been unmentioned by the OPCW – indeed, its final report on the Douma incident referred only to assessments sought from unidentified “engineering experts” commissioned in October 2018 and obtained in December 2018, suggesting the original engineering appraisal had been ignored, and suppressed, by the OPCW.

While the bombshell document went almost entirely ignored by the mainstream media, The Courage Foundation – an international organisation “that supports those who risk life or liberty to make significant contributions to the historical record” – convened a panel of concerned individuals from the fields of disarmament, international law, journalism, military operations, medicine and intelligence in Brussels 15th October in an attempt to establish why the engineering report had been surreptitiously buried.

The panel met with a member of the OPCW investigation team, who provided an “extensive presentation, including internal emails, text exchanges and suppressed draft reports”. As a result, the panel is unanimous in expressing alarm “over unacceptable practices in the investigation of the alleged chemical attack in Douma”. 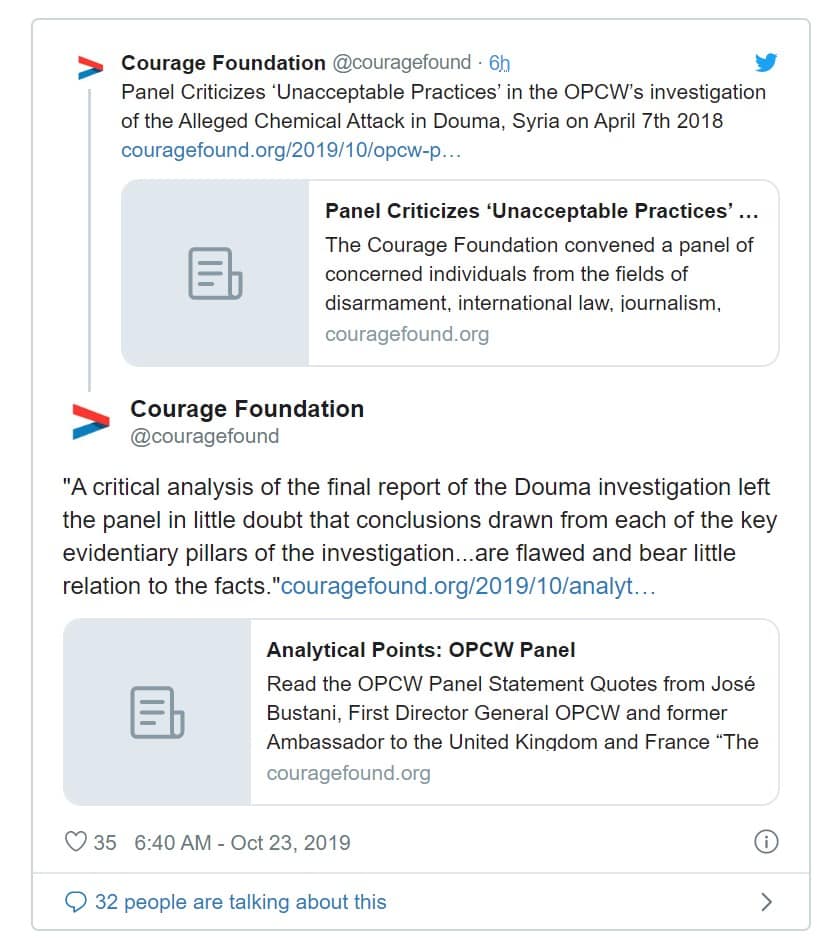 ​“We became convinced key information about chemical analyses, toxicology consultations, ballistics studies, and witness testimonies was suppressed, ostensibly to favour a preordained conclusion. We’ve learned of disquieting efforts to exclude some inspectors from the investigation whilst thwarting their attempts to raise legitimate concerns, highlight irregular practices or even to express their differing observations and assessments —a right explicitly conferred on inspectors in the Chemical Weapons Convention, evidently with the intention of ensuring the independence and authoritativeness of inspection reports,” the panel said in an official statement.

Indeed, critical analysis of the final report of the Douma investigation left the panel in little doubt conclusions drawn from each of the key evidentiary pillars of the investigation –  including chemical analysis, toxicology, ballistics and witness testimonies – “are flawed and bear little relation to the facts”. 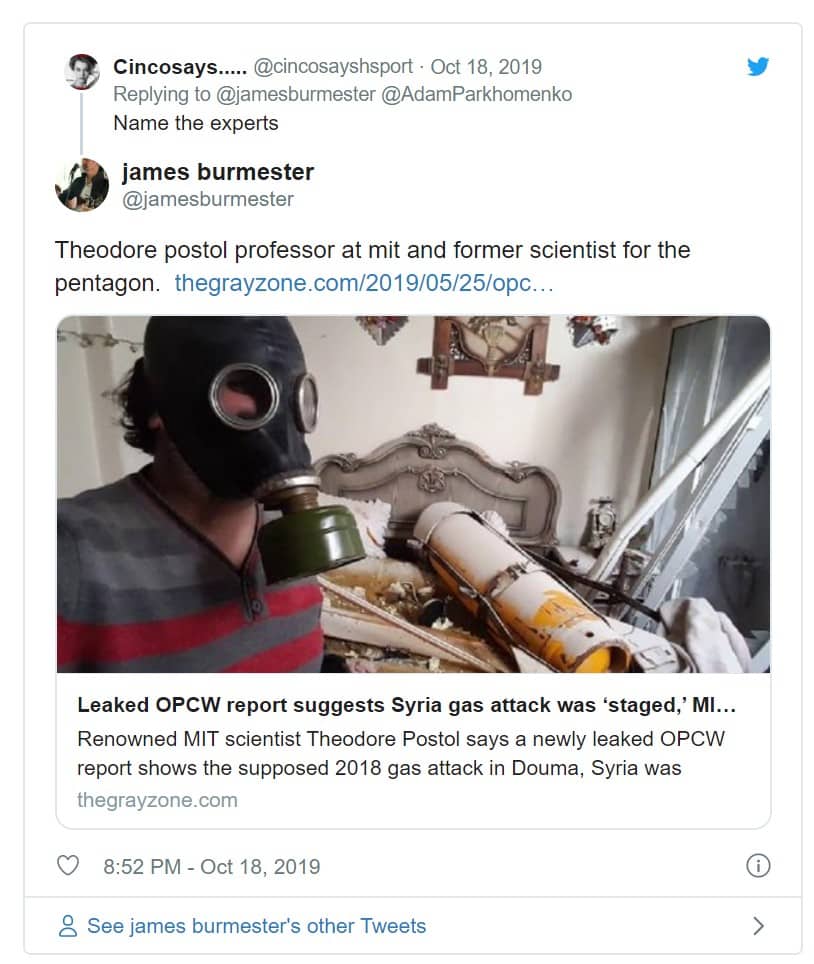 ​For instance, while biomedical analyses supposedly contributed to the report’s conclusions, the same report clearly states “no relevant chemicals were found” in biological samples taken by OPCW investigators – and moreover, “many, if not all” of the so-called chlorinated organic chemicals claimed by the OPCW to be “not naturally present in the environment” are in fact ubiquitous in the background, either naturally or anthropogenically.

“Although the report stresses the ‘levels’ of the chlorinated organic chemicals as a basis for its conclusions, it never mentions what those levels were —high, low, trace, sub-trace? Without providing data on the levels of these chemicals either for background or test samples, it is impossible to know if they were not simply due to background presence. In this regard, the panel is disturbed to learn quantitative results for the levels of ‘smoking gun’ chemicals in specific samples were available to investigators but this decisive information was withheld from the report,” the panel’s analysis states.

Toxicological studies provided in the OPCW’s final report also revealed “inconsistencies, incoherence and possible scientific irregularities”. While consultations with toxicologists are reported to have taken place in September and October 2018, no mention is made of what those same experts opined or concluded. Furthermore, the final toxicological assessment of the authors states clearly “it’s not possible to precisely link the cause of the signs and symptoms to a specific chemical”, but the report nonetheless concludes there were reasonable grounds to believe chlorine gas was the chemical used as a weapon. 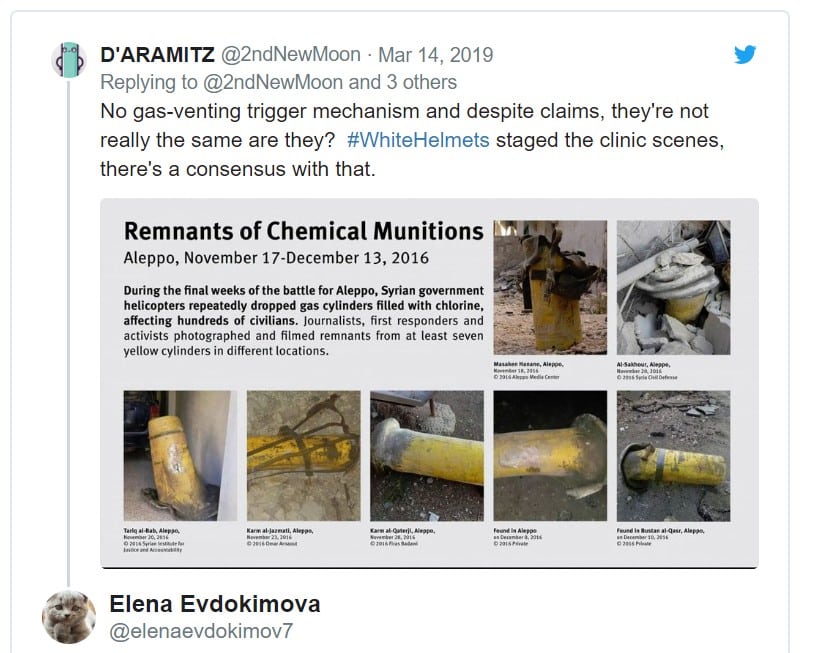 ​Even more worryingly, the panel viewed documented evidence showing other toxicologists had been consulted in June 2018 prior to the release of the OPCW interim report – these experts stated on record the signs and symptoms observed in videos and witness accounts from the incident were not consistent with exposure to molecular chlorine or any reactivechlorine-containing chemical.

“Why no mention of this critical assessment, which contradicts that implied in the final report, was made is unclear and of concern,” the panel caution.

Highlighting the partiality of the OPCW’s findings yet further, the panel found clearly conflicting witness statements had been gathered by OPCW investigators, describing “distinct and opposing” narratives of the incident – but only testimony supportive of claimed chemical weapon use contributed to the report’s conclusions. There was also a significant imbalance between numbers of persons interviewed by the respective FFM teams in Damascus and “Country X” (which WGSPM believe to be Turkey) – with twice as many interviewed in the latter.

Chillingly, the panel also concluded many inspectors in the Douma investigation weren’t involved or consulted in the post-deployment phase or had any contribution to, or knowledge of the content of the final report until it was made public – obstruction the panel feels amounts to a concerted attempt by the organisation to “obfuscate and prevent inspectors from raising legitimate concerns about possible malpractices surrounding the Douma investigation”.

WikiLeaks editor Kristinn Hrafnsson, who sat on the panel, says the evidence provided by the whistleblower “casts doubt on the integrity of the OPCW” and as a result believes it to be “of utmost interest for the public to see everything collected by the Fact Finding Mission on Douma and all scientific reports written in relation to the investigation” – OPCW staff can leak any relevant documents securely to WikiLeaks via its website.

The panel is also calling upon all inspectors who took part in the Douma investigation to come forward and report their differing observations in an appropriate forum of States Parties to the Chemical Weapons Convention. 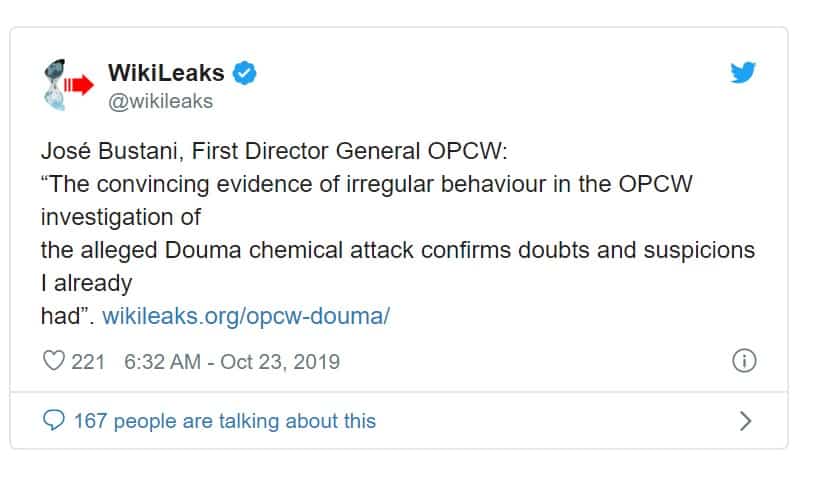 ​Dr Jose Bustani, first OPCW Director-General, was also a member of the panel. He contends the whistleblower’s testimony amounts to “convincing evidence of irregular behaviour” in the OPCW investigation of the alleged Douma chemical attack.

“I could make no sense of what I was reading in the international press. Even official reports of investigations seemed incoherent at best. The picture is certainly clearer now, although very disturbing. I’ve always expected the OPCW to be a true paradigm of multilateralism. My hope is the concerns expressed publicly by the panel, in its joint consensus statement, will catalyse a process by which the Organisation can be resurrected to become the independent and non-discriminatory body it used to be,” he added.