[ Editor’s Note: It is not rocket science to figure out that the so-called National Syrian Army (NSA) militias wanted to derail the ceasefire and deescalation via this attack. So who put them up to this?

The NSA is dependent on Erdogan for support, so there is no way he can claim they did this independently. It has been reported that he has paid their salaries during non-combat periods to have them as a cheap cannon fodder reserve to do fighting the Turkish army prefers not to do, which is any at all.

Notice the NSA did not attack Russian MPs on the border, so it looks to be a ploy to create some friction between Russia and the SAA, if nothing is done about it.

If not, more attacks may be launched on SAA positions, and we will see retaliation attacks which threaten the agreement.

Turkey might be sending a message to Assad that, if he attacks Idlib, Turkey will unleash its cannon-fodder militias against northern Syria. The SAA might not mind it, as they can then dispose of the cannon-fodder… Jim W. Dean ] 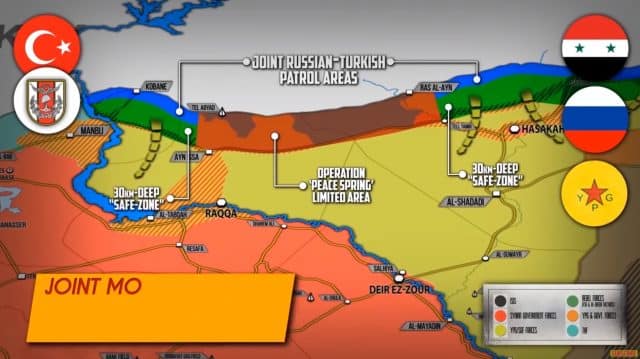 In the afternoon of October 24, the Syrian Arab Army (SAA) repelled an attack by Turkish-backed militants on its newly-established positions in the northern al-Hasakah countryside.

“The SAA repelled an attack by Turkish occupation forces and their mercenaries on the villages of al-Kozleya and Tell al-Laban in Tal Tamr countryside,” a short press release by the Syrian Arab News Agency (SANA) reads.

The failed attack was likely launched by the so-called National Syrian Army (NSA). A few hours ago, the Turkish-backed group began a fresh offensive on the Kurdish Syrian Democratic Forces (SDF) in northern al-Hasakah.

Some pro-government activists claimed that several Syrian service members were killed or injured while repelling the attack. However, this is yet to be confirmed.

The SAA began deploying troops in northern al-Hasakah and other parts of the country’s northeast region a few weeks ago under an agreement with the SDF. The initial agreement is aimed at countering the growing Turkish threat.

The NSA’s attacks in northern al-Hasakah are a violation of the Turkish agreements with Russia and the U.S. If Turkish-backed militants continue to carry out such attacks, the region could witness a serious escalation very soon.