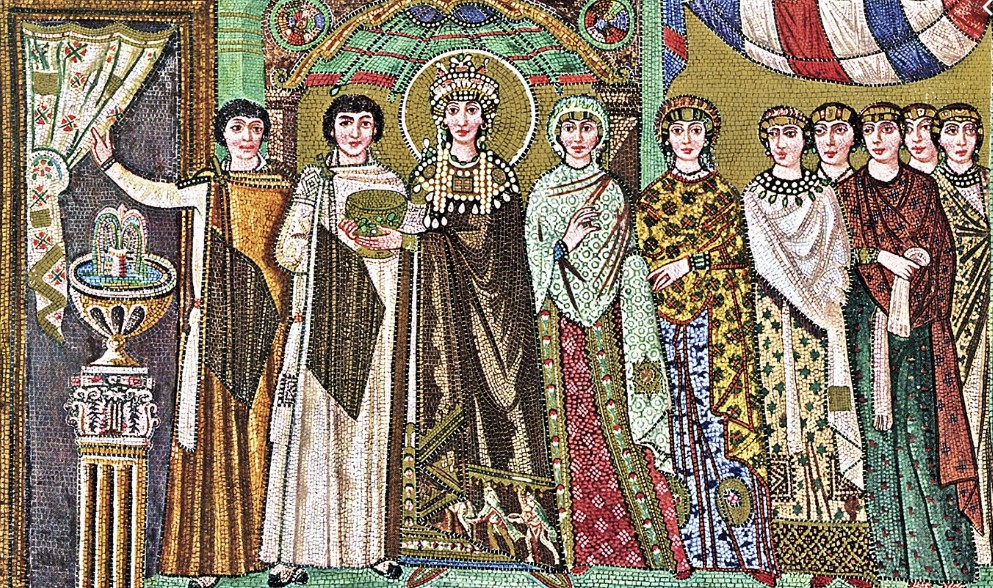 Christianity in its present form came into being after the eleventh century schism between the Eastern Orthodox and Roman Catholic Church. Before that, it used to be an exclusively Byzantine affair and most of Western Europe followed pagan customs. The reason why Catholic historians fabricated the history of ancient Roman civilization was to dissociate Christianity from its Byzantine heritage.

The theory that Christianity spread into Europe, and also in Russia, from the Byzantine Empire is validated by the fact that early Middle Ages – from 5th to 10th century, when the Byzantine Empire reached its zenith and a split occurred between the Eastern Orthodox and the Roman Catholic churches in 1054 – are referred to as Dark Ages, whereas the period between 8th century BC and 6th century AD is rather ironically called Classical Antiquity.

There appears to be clear historical bias because in descending order, as we go back in time, the reliability of information reduces proportionally. Thus, the 11th century recorded history of the Roman Catholic Church is comparatively credible, whereas Before Christ folklore transmitted mainly through oral traditions of fabulists is simply implausible.

Historically, on Christmas Day 800 AD, Pope Leo III crowned Charlemagne the Emperor of the Holy Roman Empire, forming the political and religious foundations of Christendom and establishing in earnest the French monarchy’s longstanding historical association with the Roman Catholic Church.

Thus, ninth century appears to be a watershed moment of increasing proselytization of Europe to Christianity, which obviously had its impact in Britain and Germany later. After that, the influence of the Byzantine Empire, lasting from 4th to 15th centuries, waned and a rival power center emerged in the form of Roman Catholic Church patronized by kings of Franks and Lombards in Italy.

Evidently, Christianization of Eastern Europe and Russia is attributed to the Byzantine Empire and Western Europe to the Holy Roman Empire. Thus, the history of ancient Romans, whose empire purportedly fell in 476 AD to Germanic tribes, is nothing more than folklore and the history of the Roman Catholic Church in earnest began after the coronation of Charlemagne as the Holy Roman Emperor.

The title of Holy Roman Emperor remained with Carolingian family of Charlemagne, the ruler of Franks, up to 840, and then it passed on to Germans when Otto I was declared Holy Roman Emperor by the Pope in 962. Thus, the Frankish Empire constituted the Holy Roman Empire during the early 9th century, and then the title was assumed by the Germanic Empire for the next eight centuries.

The Germanic decentralized phase of the Holy Roman Empire never reached the glory of the Frankish Empire under Charlemagne and his successor Louis the Pious. They adopted Latin as the official language of the Empire to forge a political identity distinct from the Byzantine Greeks.

Carolingians jointly ruled over Franks and Lombards in Italy, thus the Roman Catholic Church was under their suzerainty, which at the time was nothing more than a diocese of the Eastern Orthodox Church. During the period of the Byzantine Papacy from 6th to 8th centuries, the title of the Pope was equivalent to the bishop of Rome.

Although according to oral traditions, the Roman Catholic Church was founded by the apostles of Jesus, St. Peter and Paul, and was recognized by Byzantine Emperor Constantine, it’s not proved by credible history and many secular historians doubt the assertion.

In the medieval era, the theological creed of the Eastern Orthodox Church was vilified as Arian heresy by the Roman Catholic Church to establish a monopoly over Christian faith in Western Europe. Arius was a theologian of the Antioch school in Hatay province of modern Turkey in 270 AD. Most of the Germanic tribes who in the following centuries invaded the Roman Empire had adopted Christianity in its Arian form, which later transformed into German Protestantism.

It is generally claimed that Byzantine Emperor Constantine legalized Christianity and reorganized the Empire from 324 to 337 AD. Moreover, it is also alleged, albeit mistakenly, that under the reign of Heraclius (610–641), three centuries later, the Empire adopted Greek for official use in place of Latin.

Fact of the matter, however, is the Byzantine Empire wasn’t a monolith, as it had myriad dynasties of usurpers from Macedonia, Armenia etc. which spoke several East European dialects, but Latin was never introduced into the Byzantine Empire. In fact, the Byzantine Empire appears to be a continuation of Alexander’s Hellenistic Empire, as both had their arch-foes in the ancient kingdoms of Persia – Achaemenids and Sassanids.

The Justinian dynasty is generally regarded as the Golden Age of the Byzantine Empire that lasted from 518 to 602 AD. During the reign of Justinian I (527–565), the Empire reached its greatest extent after reconquering much of the western Mediterranean coast, North Africa, Italy, and Rome itself, which it held for two more centuries.