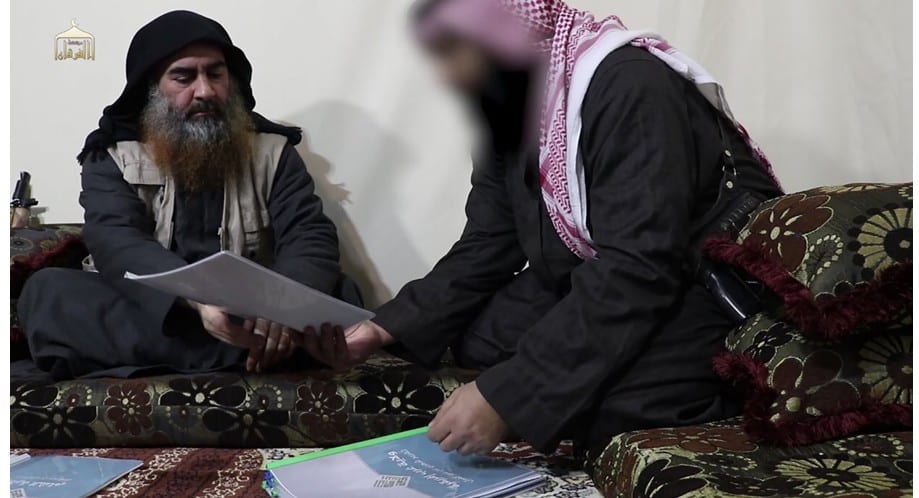 There is a proverb in the Middle East: “If you make very good molasses well, its fly comes from Baghdad.”

We know that the US is working to establish a Unipolar World Order after the collapse of the Soviet Union. According to political science, the State is the toppest organization with the authority to use weapons. If you are going to establish a World State, you will need instruments that will be used worldwide. It have to be a Guilty for using a weapon. If you have a weapon and you absolutely want to use it, you can create the culprit yourself.

After the collapse of the Soviet Union, the culprit needed by the United States was found: Osama bin Laden and the al-Qaeda Terrorist Organization. We know that Laden served as the CIA logistics officer during the Afghanistan War. Likewise, we know that the US has established the Taliban against organizations like Jamaat al-Islam and Hizb al-Islam, which the United States is working with in the struggle for Afghanistan.

When Taliban did not agree the oil pipelines that will later land in the southern seas, The ropes between the US and the Taliban are broken. Osama bin Laden, who combined his power with the Taliban, traveled the entire Islamic world with his Saudi Arabia diplomatic passport and expanded his organization. It would be stupid to think that the CIA and the Saudis were unaware of this organization.

For many years, al-Qaeda has carried out actions where that were provided  to settle of the US in many strategic regions, such as Afghanistan, Iraq, Somalia, Yemen, Sudan and the Middle East. Than it was also made military interventions and established bases in these regions by the US. The US struggle in Afghanistan for al-Qaeda has been going on for years. In fact, the US does not have a goal of achieving peace in Afghanistan.

If peace comes here, the US military will have to return to his country. In this case, the war needs to continue for the US to remain in the region. Only If the US society understands the truth about in this subject and rebels against the death of their children, then the Afghanistan adventure will end.

There has been a similar situation in Iraq. The US invaded Iraq under the pretext of al-Qaeda. However, things did not go well and the al- Qaeda militants were organized by the Russian Military Intelligence GRU against the US and showed strong resistance. The deaths of thousands of American soldiers have rebelled the US community, and the Obama administration has finally decided to withdraw from Iraq.

Is the US completely withdrawn from Iraq? No … We think that Bush, Obama or Trump are running the United States. We always know also that this is not the case and that US governments are determined by lobbies. The most effective lobby in the US administration is known to everyone: the Israeli Lobby and the New Conservatives. There is also an Oil and Weapon Lobby governing the United States. When politics, oil and weapons come together, an even greater power is formed.

Israel also needs oil and water in the region, but the most important concern is Existence and Security. For years, Israel has been working for the instability of its neighbors and the region to preserve its existence and stability. Since it cannot remain incapable its power, it also needs global power and arms such as the United States.

The United States has no historical ties to Mesopotamia, nor will it carry water from the Euphrates and Tigris to the United States. But for the Zionists and the Evangelists, these areas are the Promised Land. Which is why Daesh Terror Organization was established in these lands.

First, the organization seized the largest -Raqqa and Mosul-dams between the Euphrates and the Tigris in the Middle East. Daesh Terrorist Organization has completed its function after transferring all the seized territories to another terrorist organization PKK which is an ally of USA in the region.

Efforts to move the Daesh Terrorist Organization to Afghanistan, Iran and Africa also Algeria and Tunisia (for France that is the only western ally of the United States in the Middle East) have failed. Many reports and information have been published on the transport of some Daesh commanders by US helicopters during the departure of the Daesh Terrorist Organization from the Deyrozor-Bagoz area, the last area of ​​domination.

Likewise, it is noted that US helicopters assist  Daesh to deploy around Bagram, the largest US base in Afghanistan. More important than the reality of such information is the target of Daish actions.

All actions of the Daesh Terrorist Organization were for the interests of the US and Israel. One of the most important areas in which Daesh has existed for a long time was the Neva region to the west of the Golan Heights. This region is one of the most strategically important regions for Israel. Israel did not intervene against the Daesh Terrorist Organization in this region, nor did the terrorist organization take any action against Israel.

Likewise, the Sinai region, where the Daesh Terrorist Organization still exists, is another most strategic region for Israel. The Daesh presence in Sinai has closed the most important palestinian corridor from Gaza to Egypt. This is in line with the interests of both Israel and the Sisi administration in Egypt. It is interesting that an area limited space, such as Sina, cannot be completely cleared of Daesh.

Security concerns of each country can be understood to some extent. For example, a terrorist threat on the border of Turkey constitutes a threat for both Turkey and Europe. On the other hand, for the United States, which is bounded by a natural and difficult-to-overcome buffer zone, such as the ocean on its two sides, and its weak neighbor in the south, such as Mexico, it is difficult to understand that a direct terrorist threat from the region.

It is important that terror threats in the Middle East are intensified in oil and energy regions and power transmission lines. Likewise, Somalia and Yemen are the most strategic regions for transporting Gulf oil to Europe. In Somalia, there is no single terrorist group and action in Somaliland and Pundland, which became the sovereignty area of ​​Saudi Arabia and the United Arab Emirates, but it is no coincidence that the Shabab Terrorist Organization is active in and around Mogadishu.

Perhaps another important point for the US and its Regional Allies is the oil and gas pipelines to be established between the Middle East and Europe. Transporting oil and gas by sea is now a long and costly task. Therefore, a shorter and more economical Energy Transmission Route should be established outside the Persian Gulf – Aden Gulf – Red Sea – Suez route. This is the Middle East – Mediterranean Route.

This is the main reason for the intensified conflicts in Syria and Iraq. The United States is looking to build this new Energy Corridor. Therefore, it neither could not leave Iraq nor leave Syria. Although the the plan that aimed to establish a Kurdish state between the region and Turkey, failed, a Energy Corridor Plan will pass from the south-east of the Euphrates and south Syria to Jordan (and may be to Israel,) are still valid. The United States therefore continues to exist in the Tanif region in southern Syria.

As it is known, the latest development in this regard is that Daesh Terrorist leader Abu Bakr al-Baghdadi was killed in Idlib. According to the US Department of Defense statement, al-Baghdadi who was going to take his family were killed in the village of Bishra in north of Idlib near the border with Turkey. Interestingly, also there is no body of al-Baghdadi, like Osama bin Laden.

The Pentagon claimed to have thrown the body of Laden into the sea and says that al-Baghdadi also detonated the bomb vest. Such allegations may be believed by the US Public and the International Community, but, according to experts, are suspicious and ridiculous. It was said that Laden was living in a villa in Pakistan’s safest Military Intelligence Area for many years.

Now it is said that al-Baghdadi crossed the river Euphrates, exceed its long Essed land, passed the bilateral security perimeter around Idlib and come up to the border with Turkey. He was Invisible against Russian and Iranian intelligence In addition, al-Baghdadi is not from Idlib city, he was from Samarra originally in Iraq. After such hard claims, it can be said that: “al-Baghdadi was killed while trying to flee to Turkey in the Turkish border?”

The more groundless and ridiculous the claim of ”Spreading Democracy”, which is a fundamental element of the United States Security Strategy Document, also death of al-Baghdadi is extremely unfounded and ridiculous.

In the Middle East, the United States has been collaborating with the Zionists who have been conducting attacks and expansion policies for years, the Bedouin Arabs that were still are ruling by the kings now and PKK that is the most bloody terrorist organization in the region. This situation does not fit a big country claiming a New World Order.

Within the United States, there are many experts that struggle with Israel, Oil, Arms Lobbies and the Governments they support. Since these experts and old soldiers cannot make their voices heard in the mainstream media, they struggle in their books, universities and the internet and in their blogs such as veteranstoday.com. The world community under the influence of popular culture is still under the control of widespread knowledge.

Independent Journalist Jonathan Cook wrote in the past few days:

“The Islamic State or Isis did not emerge from anywhere else. It was the creation of twenty-year US intervention entirely in the Middle East. And I don’t even mention the mountains of evidence that the US authorities support their Saudi allies to finance and arm Isis directly – just as their predecessors in Washington help the jihadists to become al-Qaeda with the enthusiasm of expelling the Soviets from the region. It was the US Democrats who helped to develop Isis’ Barbarism.”

Scientists, independent intellectuals and journalists should be united against these groups, governments and countries that use Oil, Weapon and Terror as an Existence Tool. One day, the American community will see the realities behind the scenes and, together with the international community, will realize that these articles are truths, not conspiracies.