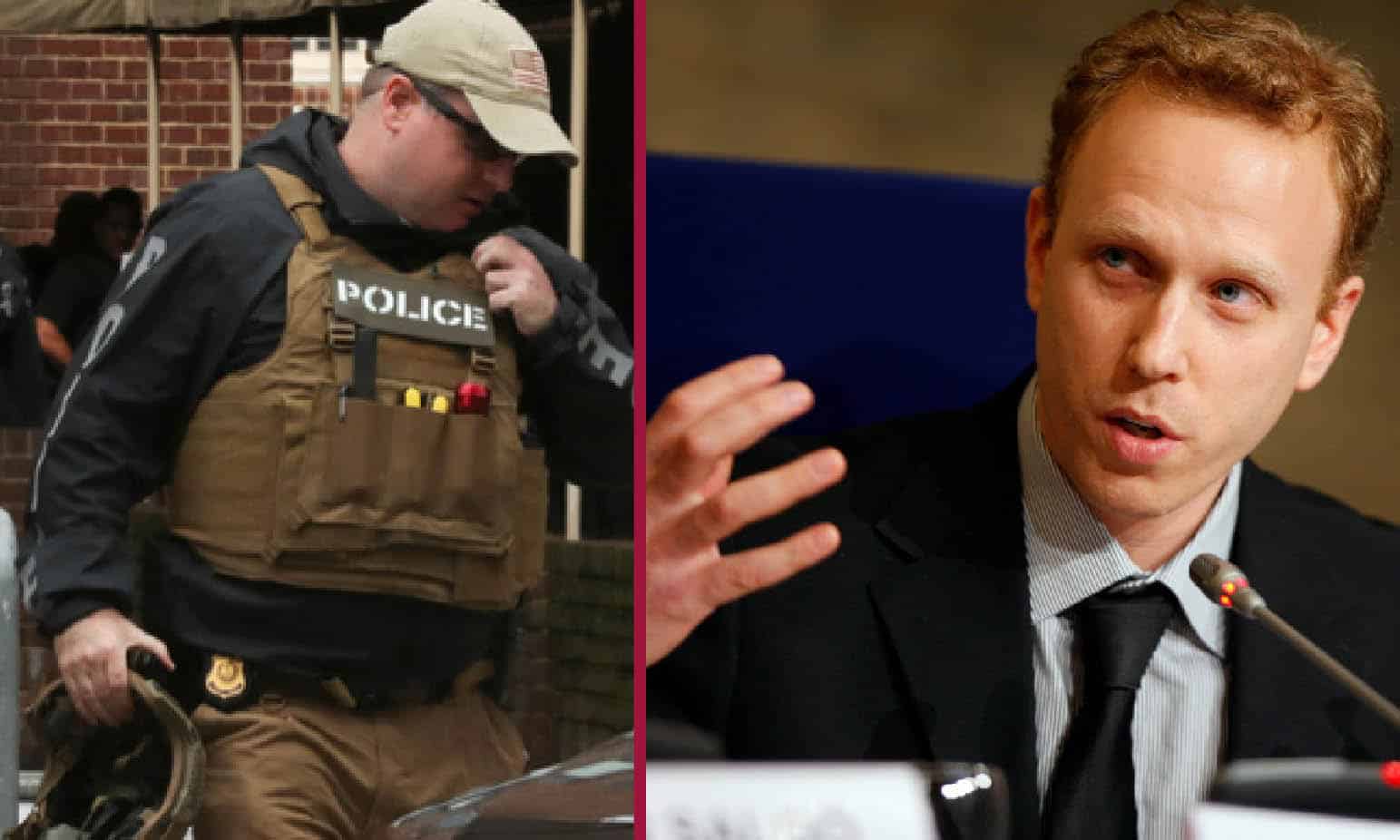 The news was released a few hours ago, at 10.41 PM (GMT +4) now on the American Atlantic coast, by the same reporter on his Twitter account as he was denied the request to call a lawyer in the two days in which was detained in the central prison of the DC.

This happened following a raid that he described as SWAT style, the special intervention units with special US police weapons, on the morning of October 26th, in his home in Washington.

The federal government essentially enlisted the DC police as SWAT, making sure to be subjected to a morning raid and then languishing in prison for days without even the possibility of calling a lawyer, the journalist told, adding that the operation was justified. “With the invented accusation of aggression linked to its coverage of the siege of the Venezuelan embassy by opposition activists supported by the United States.” 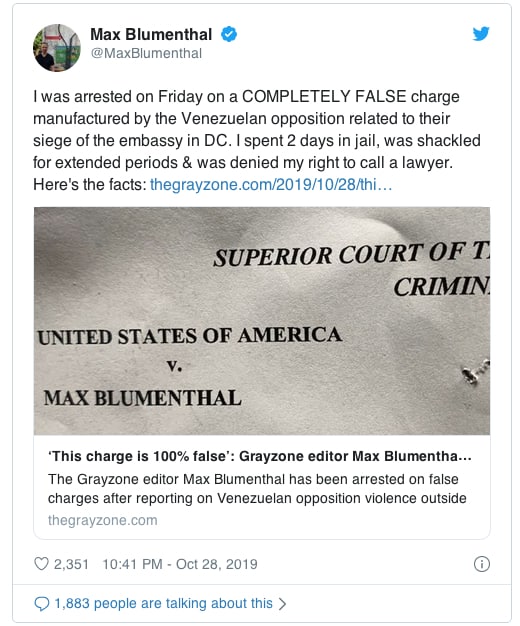 This occurred following the White House’s attempted regime change in Venezuela with the unilateral recognition of self-proclaimed interim president Juan Guaidò as opposed to president-elect Nicolas Maduro. Last spring, following the expulsion from Us of the Bolivarian Socialist Republic diplomats, supporters of Maduro occupied the embassy while those of the opponent Guaidò surrounded the building, blocking the supplies of basic needs to the occupants for days.

The tensions lasted a few weeks until May 16 when the DC police itself broke into the building putting the young pro Maduro on the wall and arresting them to free them with a warning the next day. Blumenthal was one of those who gave greater prominence to the story reported with many details even by Gospa News.

But in the climate now decoction of the coup in Caracas, where Guaidò is less and less popular and is at risk of numerous trials for complicity in the cybernetic and electromagnetic sabotages that left the nation in a tremendous blackout in March, the motivation of that old episode seems really specious.

It seems instead a terrible coincidence that the police blitz took place a few days after GrayZone published a detailed and disconcerting investigation into Pentagon and CIA funding to jihadist groups now Turkey’s allies in the invasion of Rojava, the autonomous Kurdish region of North-Eastern Syria.

read more JIHADIST FACTIONS ARMED BY US WITH TOW MISSILES

The investigation by the journalist Blumenthal published on October 16, or just 11 days before his arrest, and had a great prominence in the media specialized in OSINT webmedia such as Gospa News because it was based on a documented dossier prepared by the Turkish think-tank SETA.

The dossier, that we reported on Veterans Today, was mentioned in Italy by the war correspondent Fausto Biloslavo in his article about Syria on the newspaper Il Giornale, because it contained the detailed revelation of all the extremist Sunni Islamic formations that have received the deadly TOW anti-tank missiles from the US from 2013 onwards.

Recent investigations by Arab media have revealed that those same rockets, usable from a special launch tripod or armored vehicle, ended up in the hands of jihadist terrorists of the formations protected by Turkey in the province of Idlib as the Qaedist of Hayyat Tahrir al-Sham in which the militiamen of Al Nusra converged.

Among the 15 groups that received TOWs is Jaysh al-Ahrar, Freedom Army, founded by Hashim al-Shaykh (“Abu Jaber”) who later became HTS commander, Jaysh al-Nasr, Army of Victory, an ally of Turkey to Afrin alongside the mercenaries of the wildest jihadist faction Ahrar al Sharqiyyah, the one that killed Kurdish human rights activist Hevrin Khalaf, and finally Jaysh al Thani, Army of Islam, accused of having used white phosphorus grenades on civilians in the past Syrians and ended up at the center of a gaffe by former US Secretary of State John Kerry who accused him of being a terrorist formation, as claimed by Russia, although he was on the list of so-called anti-Assad moderate Washington-funded rebels.

The burning issue raised by Blumenthal had been spread by the Turkish Seta center probably in an attempt to highlight the great American responsibilities in the war in Syria to somehow justify the invasion of the Turkish army by Recep Tayyip Erdogan.

It should not be forgotten that the arrest of the investigative journalist took place precisely during the hours when the Pentagon had hatched the military operation against the Isis Al Baghdadi caliph on which there are so many mysteries that lead to doubting the effective completion and success of the raid USA.

A story on which the experienced American journalist, supported by a network of authoritative international sources, could certainly have carried out many investigations.

But Republican President Donald Trump, like his democratic predecessor, Barack Obama, who certainly acted more tactfully and diplomatically, does not like the Americans, the West and the whole world to know the shady intrigues of Washington and the CIA with the protesters Guarimbas Molotov cocktails in Venezuela rather than with jihadists in Syria.

The US, the big exporters of the alleged oil-rich Middle East democracy, are the first to fail to recognize fundamental rights to freedom of opinion, the press and even to call a lawyer when being arrested. Courage Max! We are all with you…

VENEZUELA, ALL REPORTS BY GOSPA NEWS