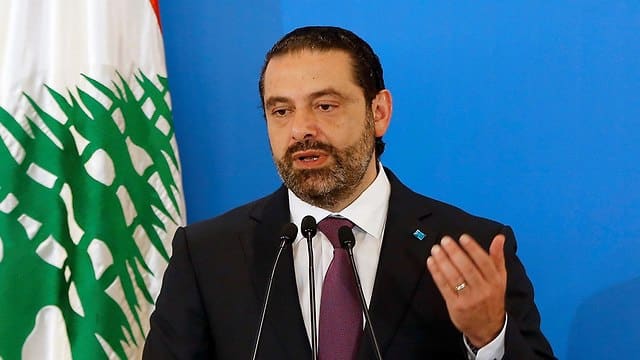 [ Editor’s Note: Hariri has come to the end of his rope, so he has dumped the big political and economic mess onto Lebanon’s fractious political parties, something the demonstrators might regret. This could be a “leaping out of the pot and into the fire” shift in the story, where even more get burned and join the unhappy folks in the streets.

How long did it take the parties to form a government after the last elections? It was something like a year, as they all fought like cats and dogs over the bankrupt carcass of Lebanon.

The demonstrators know there is $11 billion promised to Lebanon from the last protest movement, but it is being held back to make sure the money does not disappear as it has in the past into the pockets of the rich and well-connected.

The bottom line for the Lebanon mess is when the parties have control over the money, they use it to make sure their people are getting the jobs and the contracts that are the lifeblood of keeping a political party alive. Unemployed, impoverished people cannot donate much to a political movement.

A country that is mired in poverty but is also a playground for the rich – as Beirut is an “anything goes” city – creates a high cost of living situation, which is a double whammy even for the middle class.

We read the story this week of the white collar hotel worker who makes $500 per month, a fortune to a Palestinian, but who needs $700 per month to live in Beirut. To say the youth see no upscale future for themselves is an understatement, so they have hit the streets. You can see the hope in their faces below. But neither will indefinite protests help them, as that can drag Lebanon down even more.

What no one has proposed is the radical approach of bringing in an international caretaker government to manage restructuring, as the current political parties have no credibility, domestically or internationally. The donors want 100% assurance the money will not be looted – a valid concern.

The Lebanese would probably shun that approach, but if they go for the “Fairy dust is going to save us option”, they will be unhappy, also. Is there enough wisdom to promote compromise? If not, the situation will get worse… Jim W. Dean ]

Lebanese PM Saad al-Hariri is tendering his own resignation and that of his government, after over a week of protests that paralyzed the country, as the people accuse authorities of corruption and of causing an economic collapse.
–

Hariri, who was in the office since December 2016, announced quits during a televised address to the nation.

“I have reached a dead end today,” he said. The outgoing PM also reminded the country’s political parties that it was their responsibility to protect Lebanon.

The resignation went on against the will of influential Lebanese group, Hezbollah, who earlier insisted that the PM should maintain his post to avoid a power vacuum.

Last week, the head of the government announced a set of economic reforms and anti-corruption measures as thousands walked out across the country, blocking roads and calling for a revolution.

But the move backfired for Hariri, with people saying it wasn’t enough and remaining in streets, while his opponents in the cabinet reportedly blaming the 49-year-old PM of siding with the demonstrators.

Tensions were high in Beirut on Tuesday as Hezbollah supporters clashed with anti-government protesters, trying to dismantle the tents and roadblocks they’d set up around the capital. They were the first such incidents since the start of the rallies, with police interfering to separate the sides.

Local banks have remained closed for ten days now, over fears that they may be stormed by the crowds. Lebanon remains in deep economic crisis; the country has one of the world’s highest levels of government debt. According to IMF forecasts, the fiscal deficit will reach 9.8 percent of GDP this year and 11.5 percent in 2020.

International donors promised around $11 billion in support to Lebanon last year, but they say they will only transfer the money after they see real economic reforms.

Hariri already announced his resignation in November 2017, and it came under very strange circumstances. His statement back then was made from abroad, when he was on a visit to Saudi Arabia. This led to speculation that it was Riyadh that had forced him step down, amid a spike in tensions between the Saudis and Iran, which always had strong ties with Hezbollah.

However, Hariri retracted his decision as soon as he made it back to Lebanon, saying that he would stay in power and try to keep the country out of international conflicts.