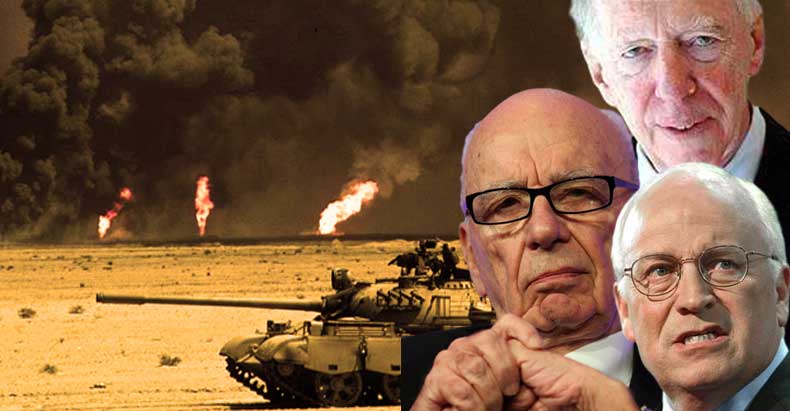 Business as usual for this group. We all know who they are and this comes as no surprise given those involved. This is another example of the real reason the US is involved in the Middle East.

Genie Energy is an American-based oil and gas company with major investors and advisors comprising a who’s who list of war profiteers – Dick Cheney, Rupert Murdoch, Lord Jacob Rothschild, and James Woolsey. The president of their Israeli subsidiary is Efraim “Effi” Eitam, an Israeli military commander who called for expelling the “cancer” of Arabs from Israel.

Together, these warmongers and would-be ethnic cleansers will soon be drilling into a vast oil and gas reserve located in the Syrian territory occupied by Israel since 1967, known as Golan Heights. The move would be in clear violation of international law, specifically the Annex to the Fourth Geneva Convention.
Israeli authorities granted Genie Energy’s subsidiary, Afek Oil and Gas, exclusive petroleum exploration rights in a 153-square-mile region in Golan Heights. In 2015, above-ground geophysical tests discovered the presence of oil and natural gas reserves that could make Israel energy self-sufficient. Afek has already drilled three exploratory wells.
Israel has benefited from its illegal occupation of Syria’s Golan Heights for decades, drawing one-third of its entire water supply from the region and providing a tourist and skiing destination at the Mount Hermon Ski Resort. Despite persistent international pressure, including from the U.S., the occupation continues and will reach a new level with the extraction of fossil fuels.
Rupert Murdoch heralded his involvement in Genie Energy by touting the prosperity and freedom it will bring to the world.
“Covering and distributing news has been my life’s work,” said Mr. Murdoch. “If Genie’s effort to develop shale oil is successful, as I believe it will be, then the news we’ll report in the coming decades will reflect a more prosperous, more democratic, and more secure world.”
Of course, the war-stricken, starving, desperate people of Syria will never see a shred of that prosperity and security. Murdoch’s Fox “news” channel has been instrumental in pushing war in the Middle East and obfuscating the role played by the U.S. in fomenting the Syrian war, and soon he and his cronies will be reaping the profits.