Syria: the lessons of the “diplomatic academy” on the basis of Khmeimim

[ Editor’s note: We are far enough along in the Erdogan incursion into Syria to look at some of the early reporting to see who understood what was going on behind the scenes.

I saved this Dmitry Minin piece to use as a retrospective, as we had plenty of VT material for the day-to-day action. Minin was definitely ahead of the curve.

He nailed early, as we did, that Erdogan protected a weakness in not being willing to open up a broad front in Syria with his huge Turkish army resources to make it impossible for the SDF to defend.

Erdogan only used several regular army brigades; and for lead troops, he boot-strapped a mixed bunch of militant thugs from Afrin and Idlib into the Syrian National Army front to lead the advance.

Erdogan was obviously concerned about political problems from Turkish soldiers coming home in body bags. Such are not the concerns of a strong leader, but one viewing himself in a precarious position.

He was not expecting the SAA to respond so quickly, nor did the rest of us, as the Kurds’ deal with Damascus was put together in what appears to have been one meeting.

Erdogan thought the SAA would not risk losing momentum to renew its goal of clearing Idlib of jihadis as critical for creating the conditions needed for possible new elections next year.

There were other parties, the remains of the US coalition, that wanted to prevent this. With the jihadis beaten down to a guerrilla-war level, the Syrian refugees returning would take a lot of pressure off Lebanon, while Israel would prefer it remain under stress forever.

The backdrop for all of this is that we can’t know what Trump is going to do, regardless of what he claims. And if he does something, he might undo it the next day or the next week. Where does that leave the public on trying to figure out where US policy is going?

“Guessing” is the answer to that, which means we don’t have any real control over it, despite claims of living in a representative democracy. As Gordon loves to say, it’s a nasty world out there.

More proof of that came out today in the story of CIA contractor death squads who have been keeping a tight rein on the drug-dealing in Afghanistan, killing those chosen as speed-bumps and writing the attacks off as anti-ISIS operations.

But part of that mix has included “pesky” government reform people, who are also disposed of and added to the ISIS KIA sheet to show the US is getting the job done. Welcome to the world of using contractors who are not accountable.

How have we not seen any real pressure to stop this, or even rein it in even from the veteran community, when more than a few veterans are involved? The vets seem to be the last ones to realize that questions might be asked of them – “Where were you, and why didn’t you do anything?”… Jim W. Dean ] 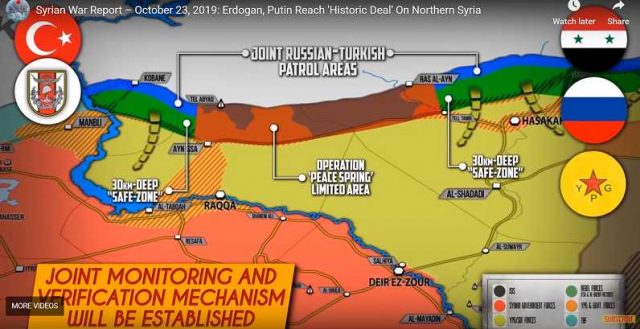 At the end of the first week of the Turkish military invasion of Syria, there was a dramatic turn, which radically changed the strategic situation and, apparently, will significantly bring the general end of the war in the country.

As a result of continuous hours-long negotiations at the “diplomatic academy” – the Center for Reconciliation of the Parties at the Russian base of Hmeimim – the representatives of the Syrian central government and the Syrian Kurds of Rojava managed to reach an agreement in principle on joint actions to counter Turkish intervention.

The general picture at the theater of operations in the invasion zone immediately decisively changed. The advanced units of the government Syrian Arab Army (SAA), primarily from the 5th mechanized corps trained by Russian advisers, as well as the 7th mechanized division with lightning speed, occupied almost all the key points in Rozhava.

In the west, they entered the large cities of Manbij and Kobani, thereby closing the way for the Turks to transfer reinforcements from Idlib and Afrin to the puppet Syrian National Army (SNA) they created.

In the center of the SAA, the Euphrates unexpectedly jumped across the Kurdish-held largest dam in the city of Tabka and occupied Ein Assa, limiting the possibilities for expanding the Turkish “corridor” in this section.

In the east of Rozhava, in the region of the actual capital of the local Kurds of Kamyshly, the SAA, despite all the vicissitudes, retained a well-fortified garrison of approximately brigade composition. Having received reinforcements, this compound almost completely controls the entire east of the region, leaving the Turks no chance of advancement in this part of the country.

Thus, if you look at the map of Turkish aspirations and the actual state of the theater of war, it becomes obvious that the blitzkrieg of Ankara in Syria failed.

Of the 340 km planned zone by the Turks, they managed to occupy only a strip of 80 km between the cities of Tell al-Abyad and Ras al-Ain. It is clearly seen that when the Syrian troops from the west and east close, and they will inevitably carry it out in the coming hours, the Turkish buffer will narrow even further. The Turkish army has extremely limited opportunities for further expansion and changing the situation in its favor.

Foreign military analysts note that if in the early days of the Turkish military almost overwhelmed by euphoria, the Kurdish front broke up so unexpectedly easily, now they are in a state of confusion and concern.

The Turks did not expect to fight the battle-hardened regular army of Syria, especially without the support of aviation, since Russia clearly warned that it would not allow it to be used against the SAA.

In recent days, both the Minister of Defense and the Chief of the General Staff of Turkey have regularly called their Russian colleagues, apparently trying to give an expanded interpretation of the agreements on security zones between the parties. However, they are apparently clearly answered that all these concerns do not relate to the actions of the Syrian government army protecting the national border.

In fact, Ankara self-confidently drove itself into a dead end, which could end for her a huge military, political and economic failure. Turkey made three major strategic mistakes.

1. First of all, she underestimated the possibility of reaching an agreement between the Kurdish leaders and the Syrian leadership, and also miscalculated the immediate intentions and capabilities of the latter. According to some sources, the Turks believed that Damascus would use their operation to advance in Idlib and would not have time to react to Turkish actions in Rojava. It turned out that Assad was ready to respond.

2. Turkey managed not to enlist the support of any state. She limited her capabilities, finding herself under a hail of international criticism, without the support of her closest allies, some of which, such as the United States, imposed sanctions against her. Finally, Erdogan, with his own hands, ensured the international legitimization of the Assad government in defense of the Kurds, which had been completely deprived of it for so long.

3. Wanting to limit their losses (primarily for domestic political reasons), the Turks used in the operation too little contingent (3-4 brigades). They tried to lay the main burden of battles on the Syrian National Army (SNA) they hastily created from the militants of Idlib and Afrin. And if the Turkish units at a number of points achieved their goals, then the SNA was everywhere defeated by the government SAA and the individual Kurdish detachments that joined it. Ankara is not able to carry out escalation at the expense of its own forces; the favorable moment for this has been missed.

And this is only part of the problems faced by Turkey. According to one of the political leaders of the Syrian Kurds, the co-chairman of the Democratic Union Party (PDS) Salih Muslim, the agreement signed in Khmeimim Damascus and the Kurds contains, in particular, the following goal: according to the agreements, at this stage the parties will focus on taking control the borders of Rojava, and subsequently joint forces will begin the liberation of the Turkish-held Kurdish canton of Afrin.

It is likely that this attack will affect Idlib. The Turks themselves gave grounds for this when they involved militants from Afrin and Idlib in operations in Rojava, violating all agreements on de-escalation zones. Instead of a “small victorious war”, the Turks may face such a turn of events for which they are simply not ready.

S. Muslim categorically rejected all the accusations that the Kurds were releasing from the camps of IS militants (the organization is banned in Russia).

“We did not free anyone. Those who managed to escape fled due to Turkish shelling of the camp and prisons. For example, the surroundings of the prison and the Ain Issa camp were bombed. In Ain Issa there were also American troops. Why were they silent when the Turks fired on the camp and the prison, why didn’t they stop the Turks? ”

The government’s CAA has already approached this camp and is going to take custody of all the remaining camps. This will only increase the credibility of Damascus as a fighter against terrorism.

It can be assumed that the failure of the Turkish operation in Syria will cause in Ankara a desire to shift the responsibility for this to someone else. It cannot be ruled out that a certain wave of dissatisfaction with the actions of Russia will arise.

However, there is no reason for this. The best way out in this situation, turning it into a common victory of common sense, would be, for example, to use the intermediary services of the same “diplomatic academy” in Khmeimim. A productive dialogue with Damascus in the current conditions is the only option for “Ankara to save face” for Ankara.

Based on the materials of the Strategic Culture Fund