[ Editor’s Note: Finally we had the inevitable, real Turkish Army troops engaged with Syrian soldiers with unnecessary deaths. The Turks would of course say they thought they were firing on YPG units, but this should not be possible with modern communications. 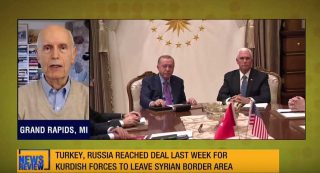 The Turkish command center would have a battle map up on a huge screen with the real time positions of all factions shown in close to real time, thanks to the wonderful world of drones, and also communications intercepts.

Even if the Turkish troops can’t speak the languages, their Intel officers sure as hell can tell the difference between Syrian Arabic and the Kurdish language.

Damascus wisely chose not to retaliate, as that would have just made the situation worse. The big goal for Syria is to make sure it continues to get control over its territory and these soldiers deaths were unfortunately part of that price.

So far the deaths and destruction that had been anticipated from the Turkish incursion have not materialized. Turkey does not want to get over extended, hence you see Erdogan did not even attempt a full border incursion, but picked two major border towns to take.

The future will not be determined by what Erdogan does, but what the Syrians and Kurds can and will do. Will the Kurds deal straight up with Damascus, or play Assad off against the US so it can keep the US gravy train rolling?

Whatever they might be conspiring, many ears will be trying to find out. But that said, all eyes will be turning to Idlib next to see if Assad rolls forward with clearing Idlib of jihadis which has to be done to have an election next year.

And right behind this in priorities will be getting control of its Deir Ezzor oil fields so those resources are there to budget rebuilding the country. You can be sure the Syria haters will be doing all they can to wreck that… Jim W. Dean ]