George Armstrong Custer is famous for his fatal defeat at the Little Bighorn in 1876, but Custer’s baptism of fire came during the Civil War.

After graduating last in the West Point class of 1861, Custer served from the First Battle of Bull Run (only a month after graduation) through Appomattox, where he witnessed the surrender. But Custer’s true rise to prominence began at Gettysburg in 1863.

On the eve of the Battle of Gettysburg, only twenty-three years old and barely two years removed from being the goat of his West Point class, Custer received promotion to brigadier general and command – his first direct field command – of the Michigan Cavalry Brigade, the “Wolverines.” 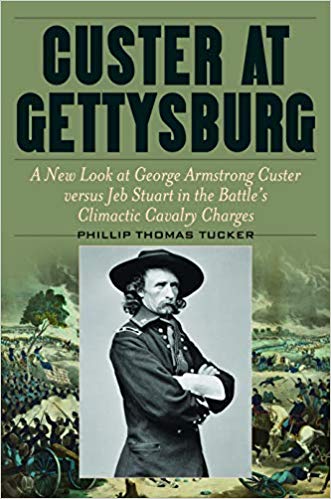 “A thoughtful and challenging new look at the great assault at Gettysburg, from planning to aftermath. Not afraid to lay blame where he thinks it belongs, Tucker is fresh and bold in his analysis and use of sources. Even though any reader knows in advance the outcome, still Pickett’s Charge maintains suspense to the sound of the last gun.”

Now that he held general rank, Custer felt comfortable wearing the distinctive, some said gaudy, uniform that helped skyrocket him into fame and legend. However flashy he may have been in style, Custer did not disappoint his superiors, who promoted him in a search for more aggressive cavalry officers.

At approximately noon on July 3, 1863, Custer and his men heard enemy cannon fire: Stuart’s signal to Lee that he was ready for action.

Thus began the melee that was East Cavalry Field at Gettysburg. Much back and forth preceded Custer’s career-defining action. An hour or two into the battle, after many of his cavalrymen had been reduced to hand-to-hand infantry-style fighting, Custer ordered a charge of one of his regiments and led it into action himself, screaming one of the battle’s most famous lines: “Come on, you Wolverines!” Around three o’clock, Stuart mounted a final charge, which mowed down Union cavalry – until it ran into Custer’s Wolverines, who stood firm, with Custer wielding a sword at their head, and broke the Confederates’ last attack.

In a book combining two popular subjects, Tucker recounts the story of Custer at Gettysburg with verve, shows how the Custer legend was born on the fields of the war’s most famous battle, and offers eye-opening new perspectives on Gettysburg’s overlooked cavalry battle.