[ Editor’s Note: This article got lost in all the fast-paced coverage on Erdogan’s incursion into Syria; although dated from a week ago, it is the first time I can remember where Russia has “demanded” the removal of all illegally deployed troops.

What is missing in this Russian statement is anything about taking the issue to the UN. It seems very little is taken to the UN anymore; but one would think that a multi-year, illegal deployment of any country’s troops in another country would trigger a UN response.

The founding UN membership documents clearly layout that members will not do this to other members, yet we see the unipolar power does not view itself as bound by those documents.

Unfortunately, to get the UN established, a poison pill was added with the 100% vote requirement from the Security Council to go into another country, where one UNSC member could block it. This would fix the US encroachment into Syria. The US got around that simply by not bothering to ask the UNSC for approval. Imagine that.

I have been somewhat amazed for the past five years that there has been no public pressure to take a look at the failure we have with a UN that cannot deal with rough element members, and we all know who they are…Jim W. Dean ] 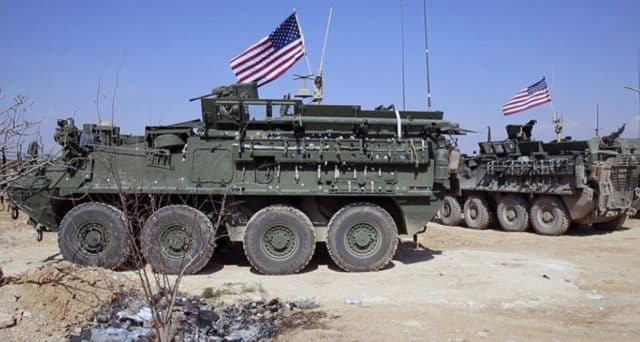 Russia has called for the withdrawal of all US troops whom it sees as illegitimately deployed to Syria amid reports that the Pentagon plans to send additional troops into northeastern Syria.

“As for the presence of American soldiers in Syria, our position is well known,” Kremlin spokesman Dmitry Peskov said, adding that US troops had been deployed without permission from Damascus.

Peskov said both Moscow and Damascus seek the complete withdrawal of all occupying forces from the country.

“Russian units are present in Syria legitimately at the invitation of the Syrian leadership,” he added, Russia’s Tass news agency reported.

The Pentagon announced on Thursday that the United States will deploy troops to “protect oil fields” in northeast Syria with the help of Kurdish militants.

“The US is committed to reinforcing our position, in coordination with our Syrian Democratic Forces (SDF) partners, in northeast Syria with additional military assets to prevent those oil fields from falling back into the hands of ISIS or other destabilizing actors,” a defense official said in a statement.

The official, however, did not explain how the largely defeated and almost non-existent Daesh terrorist group could regain control of the region’s oil, or what was meant by “other destabilizing actors.”

About 500 troops may reportedly be deployed near the oil fields, apparently to prevent advancing Syrian army troops from taking over the control of the assets.

US President Donald Trump had ordered the complete withdrawal of US troops from the region last week before rowing back on the decision and announcing that a continent of special forces would be left in the country to control Syria’s oil fields.

“We want to keep the oil, and we’ll work something out with the Kurds so that they have some money, have some cashflow. Maybe we’ll have one of our big oil companies to go in and do it properly,” Trump said during a cabinet meeting on Monday.

Damascus is in great need of its oil resources amid crippling unilateral Western sanctions against the country. The Pentagon also has a garrison of about 300 troops deployed in the al-Tanf region near Syria’s eastern border with Jordan and Iraq.

Earlier this month, President Trump gave a green light to Turkey to attack northeast Syria in an apparent bid to drive away Kurdish militants which it regards as terrorists from the regions near its border.

Syria’s official news agency SANA on Thursday said an attack on Syrian army positions by Turkish troops and its proxies positions left some casualties. Syrian troops were able to repel the assault, it added. SANA did not further elaborate on the details of the attack.

Under the deal, Russian military police and Syrian border guards will help with the withdrawal of Kurdish forces from a designated area drawn 30 kilometers deep into Syria from the Turkish border.

On Friday, the Russian Defense Ministry announced that about 300 additional police from the southern Russian region of Chechnya had arrived in Syria to take part in implementing the agreement.

The Russian and Syrian Coordination committees for the return of refugees on Thursday warned that the Turkish intervention in Syria may lead to a humanitarian and economic crisis for civilians living in the affected region.

“Returning the situation to normal in those regions requires re-establishment of control” by the Syrian government, a joint statement by the two committees said.

The statement said the Turkish incursion had displaced about 165,000 Syrians and that thousands had been able to return due to efforts led by the Syrian government. Many humanitarian organizations have expressed concern about potential humanitarian costs of the Turkish operation.

On Thursday, SANA reported that anti-Turkey protests had been held by Syrian civilians in the Ras al-Ayn countryside. The protesters said they had been prevented from returning to their homes by Turkish forces.

Local sources said Turkish-led troops had looted local property. Two civilians were also reported to have been injured when Turkish forces opened fire on locals of the al-Mushrafeh village in Ras al-Ayn.