That begs the question, then who? There is no one, or any group so far that has the identity needed or any kind of a following with some political power behind it.

Amnesty International’s Razaw Salihy added, “(These are) not only the resignation, but also that everybody in government be held accountable for long-standing human rights violations as well as … very deep corruption in government.”

“I think this is a portion of what they were demanding,” Hassan said. “Definitely we need a clean government. The protesters have set the bar very high for us, so we cannot anymore try to weasel our way out of that commitment.”

Early indications are that Hariri is the only candidate who has any support as prime minister, which brings us full circle and probably will bring the protesters back to the streets. Who could possibly have any credibility to root out historical corruption in Lebanon? Who would be the muscle behind them? Hezbollah. The Army?

The Old Guard is going to lay low and ride this thing out, like it has in the past. Part of their iron rule is to see that no viable options exist. This is not a game that I would bet on at this point. It could get worse before it gets better… Jim W. Dean ] 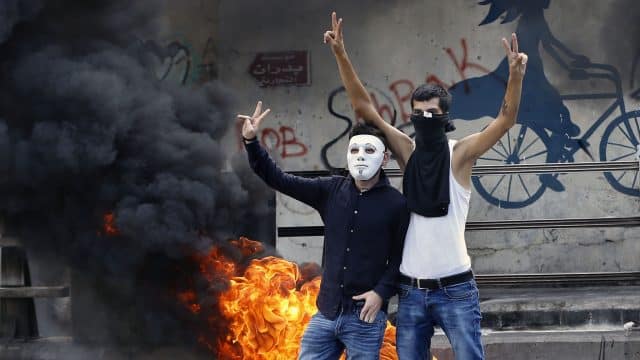 BEIRUT (Sputnik) – The Lebanese society must unite in the fight against corruption, while the authorities should restore people’s trust, President Michel Aoun said on Sunday amid mass protests in the country.

“The corruption has been raging for decades and will not be overcome if we do not unite our efforts … The people’s rights and trust have been lost. This is a big problem and we must restore this trust,” Aoun said, addressing his followers in the city of Baabda.

The Lebanese government resigned this week after 13 days of protests over economic hardships. Outgoing Prime Minister Saad Hariri has been asked to perform his duties until the new government is formed.

The country’s leader also thanked his followers for their support.

The protests in the country were sparked by the authorities’ intention to introduce a tax on online calls as well as poor economic conditions and low living standards. The plans for the additional levies have since been dropped but the protests continued. The unrest resulted in further deterioration of the economic situation.