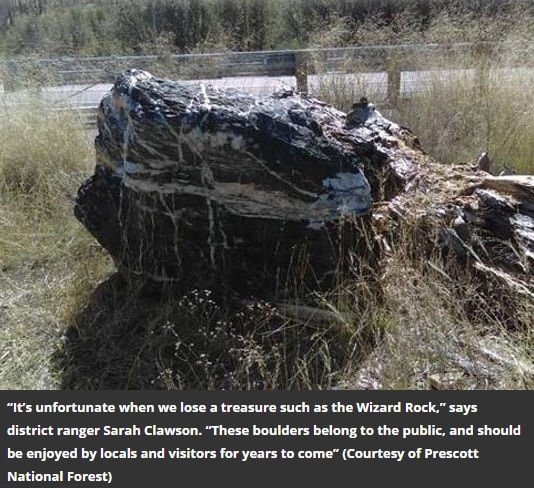 A hulking one-ton boulder known as Wizard Rock is one of the most popular landmarks in Arizona’s Prescott National Forest. Located along a highway that cuts through the sprawling property, the boulder is striking to behold—it’s black, with ribbons of white quartz running through it—and drivers often pull over to admire its beauty. Unfortunately, Elizabeth Wolfe and Saeed Ahmed report for CNN, Wizard Rock disappeared from its longtime spot on the side of the road around two weeks ago.

Prescott National Forest staff announced the brazen theft in a recent statement appealing to the public for information on the boulder’s whereabouts. It is illegal to remove minerals from National Forest lands without a valid permit, and those who violate the rules face fines of up to $5,000 dollars or a six-month jail sentence. Some offenders receive both punishments. Permits are required to remove most items, including firewood, plants and trees, from forests.

Because Wizard Rock is so large, staff believe the thief—or thieves—used heavy equipment to cart it away. “The easy way to do it would be a backhoe,” Jason Williams, Prescott’s trails and wilderness manager, tells Weldon B. Johnson of the Arizona Republic. “But, if you had a trailer positioned properly and didn’t mind beating some things up you might be able to do it with a Bobcat. But you surely aren’t going to be able to do it any other way.”